Night of the Creeps (Blu-ray) 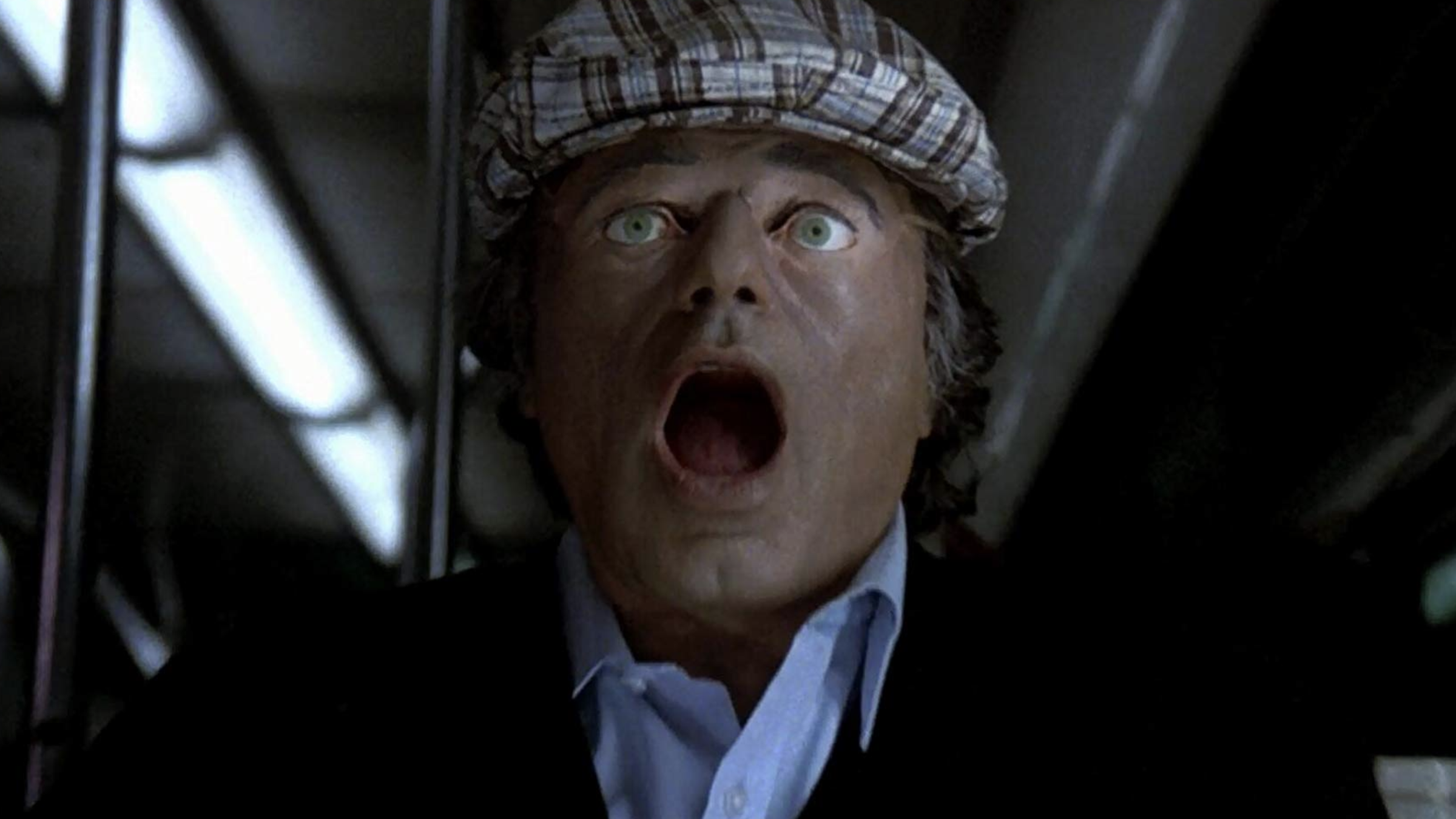 Shout!Factory’s Scream Factory line is one of the best reasons to own a Blu-ray player. I have enthusiastically purchased films from this label for half a decade and have rarely been disappointed on a blind buy basis. One of the specialities of the label is deluxe releases of cult horror and science fiction films from the Eighties. I have loved those movies since watching Joe Bob Briggs host Monstervision on TNT as a child. The label recently decided to give the deluxe treatment to a genre favorite Night of the Creeps and you can rest assured that they have treated the film as lovingly as you would hope.

The film begins on a spaceship. An alien is being chased by two aliens with blasters. The alien succeeds in sending a tube off of the spaceship – some form of experiment that the other aliens were trying to recover.

1959 – Sorority Row- Johnny, a college student, picks up his date, Pam, and they head to lover’s lane. They are interrupted briefly by a young police officer named Ray that knows the girl. Something flies across the sky overhead and crashes in the forest behind them. Johnny goes into the forest to investigate it. Meanwhile – the radio announces that there is an escapee from the asylum carrying an axe in the area. Johnny approaches the tube and something shoots out of the tube into his mouth. Meanwhile, the axe wielding maniac turns the girl in the car into a victim.

Pledge week, 1986 – shy kid Chris Romero (Jason Lively) and his crippled friend JC (Steve Marshall) walk the campus. Chris wants to meet sorority girl Cynthia (Jill Whitlow.) They decide to pledge the Beta fraternity to try to help Chris get a chance with her. Brad a.k.a. the Bradster (Allan Kayser) asks them to perform a task to join. Brad is unbeknownst to them Cynthia’s boyfriend. When Chris and J.C. sneak into a lab, they find Johnny (from 1959) cryogenically frozen. They had been sent by the Betas to find a cadaver and drop it on the steps of the library, so they disengage Johnny from the cryogenic chamber. When Johnny grabs one of their legs, they run from the lab. Johnny kills the lab technician who stumbles upon him outside of his cryogenic chamber. Chris and JC have no idea what they have just released. Detective Ray Cameron (Tom Atkins) is brought in to investigate the death of the lab tech. Ray has a dark past that was influenced by the night in 1959. Soon Ray, Chris, JC, and Cynthia are fending off alien parasites as they attack the town and turn frat boys into zombies.

Night of the Creeps is a blast. There is a lot to love about the film. It steals from all sorts of horror films – The Blob, Shivers, Night of the Living Dead – and also steals from urban legends we all know. It’s a love letter to horror films and science fiction with its tongue firmly in its cheek. It is just dressed up as a horror film. To see what I mean just read the character’s full names: Cynthia Cronenberg, Ray Cameron, Sgt. Raimi, Detective Landis, John Carpenter Hooper, and Chris Romero. Fans of those genres should get a great kick out of how the script appropriates every cliche imaginable into a cohesive and fun whole. The film has a great sense of humor and the ways it pokes fun of fraternity brothers gave me a great laugh. There isn’t anything malicious about the film and the final confrontation between the characters and the parasitic zombies is a good old fashioned splatter fest that should please all.

One of the reasons the film works is a singularly awesome performance. Tom Atkins is so enjoyable as badass shotgun toting cop Ray Cameron that he is worth the price of admission on his merit alone. There is a reason why Shout!Factory printed a limited edition of this film that featured an action figure replica of that character. There is also a reason that release sold out quickly. The other performances are solid in the film, but Tom Atkins runs off with the film once he shows up. That said – Jill Whitlow is easily one of the cutest scream queens of the Eighties and is pretty lovely also. Jason Lively is likable as the nerd hero and Allan Kayser is great as the narcissistic Bradster. The film also features an amazing cameo from Dick Miller as Walt the weapons specialist at the police station. This is one of my favorite cameos by Dick Miller ever. The film is capably directed by writer Fred Dekker who went on to write and direct The Monster Squad,  another beloved film from the Eighties.

One thing worth noting – this release features both the Theatrical Cut and the Director’s Cut. The only difference (that I noticed) was the endings, which are substantially different. Which ending is better? Honestly, I thought both endings were pretty great, but I lean just slightly towards the Director’s Cut ending. I promise that in this case both endings are worth checking out.

Night of the Creeps crash lands onto Blu-ray with a 1080p MPEG-4 AVC encoded image in 1.85:1 aspect ratio. I was really impressed with the transfer of the film. Fine detail is great and the film is not persistently grainy or soft. There are a couple instances where some heavy grain is apparent but they are very rare. I watched the film on my UHD television and it really delivers. The opening black and white sequence looks awesome with great contrast. The color sequences for the rest of the film have a similar look to other films from that time, but I can’t imagine it looking better than it does here. I reached out to Shout!Factory and they confirmed that the source for the transfer is the same as the previously released Director’s Cut Blu-ray. Unfortunately- I did not have the opportunity to compare the two discs so I can’t say if there is a significant difference in how the video presentations look, but a buyer can make an educated decision based on all the facts presented here.

Similar to the video, the audio presentation on Night of the Creeps is very well done. The DTS-HD MA 5.1 surround track sounds great. When the movie really gets going in the second half, the surrounds are used well and often. Dialogue is very clear and the excellent soundtrack by Barry De Vorzon is presented well.

Night of the Creeps is a shotgun blast of comedy horror from the Eighties. I watch a lot of these types of films, and this is easily one of the best ones. Packed with memorable performances and every cliche imaginable, its an entertaining film with a great affection for the genres it emulates. Fans of everything from Fifties science fiction to George Romero films will find a lot to enjoy. If you are a fan of the film, you’ll be screaming like banshees when you see the treatment that Shout!Factory has given the film. Shout!Factory have provided an excellent looking transfer, two cuts of the film (which are different due to alternate endings), two audio commentary tracks, and hours of interesting supplemental materials. My favorite piece is the excellent Thrill Me! documentary from Michael Felsher and Red Shirt Pictures. Although this piece was included on the previous Director’s Cut Blu-ray, it is not to be missed. Fans will surely want to upgrade their disks and get the defining edition of the film. Highly Recommended 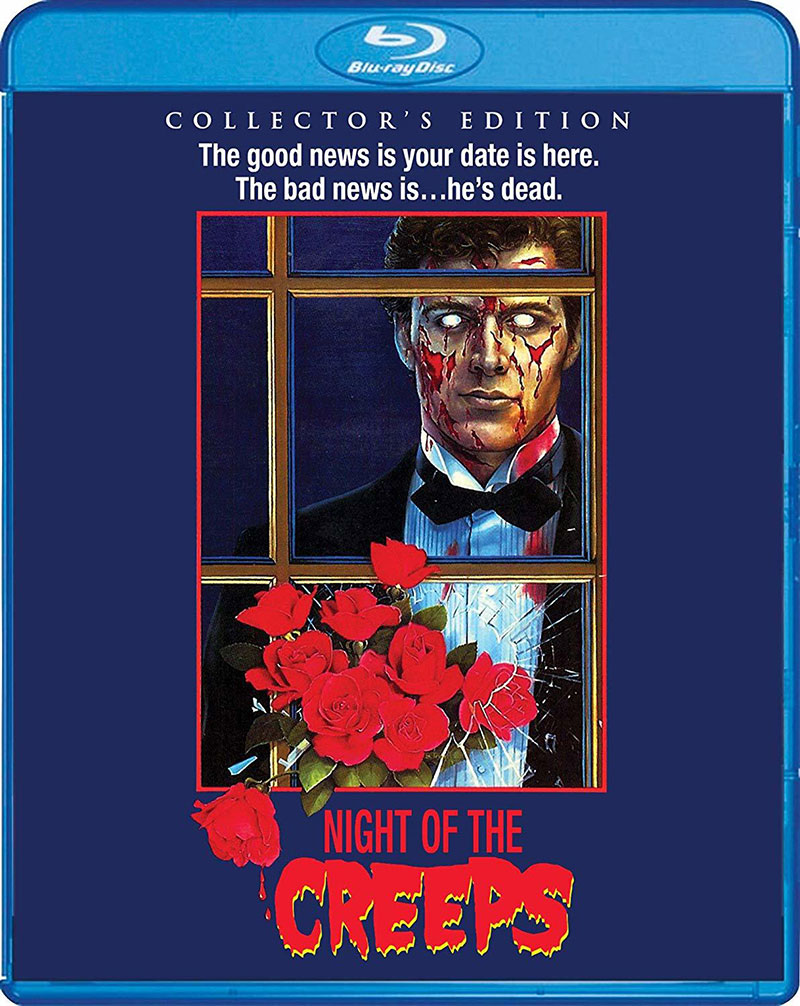