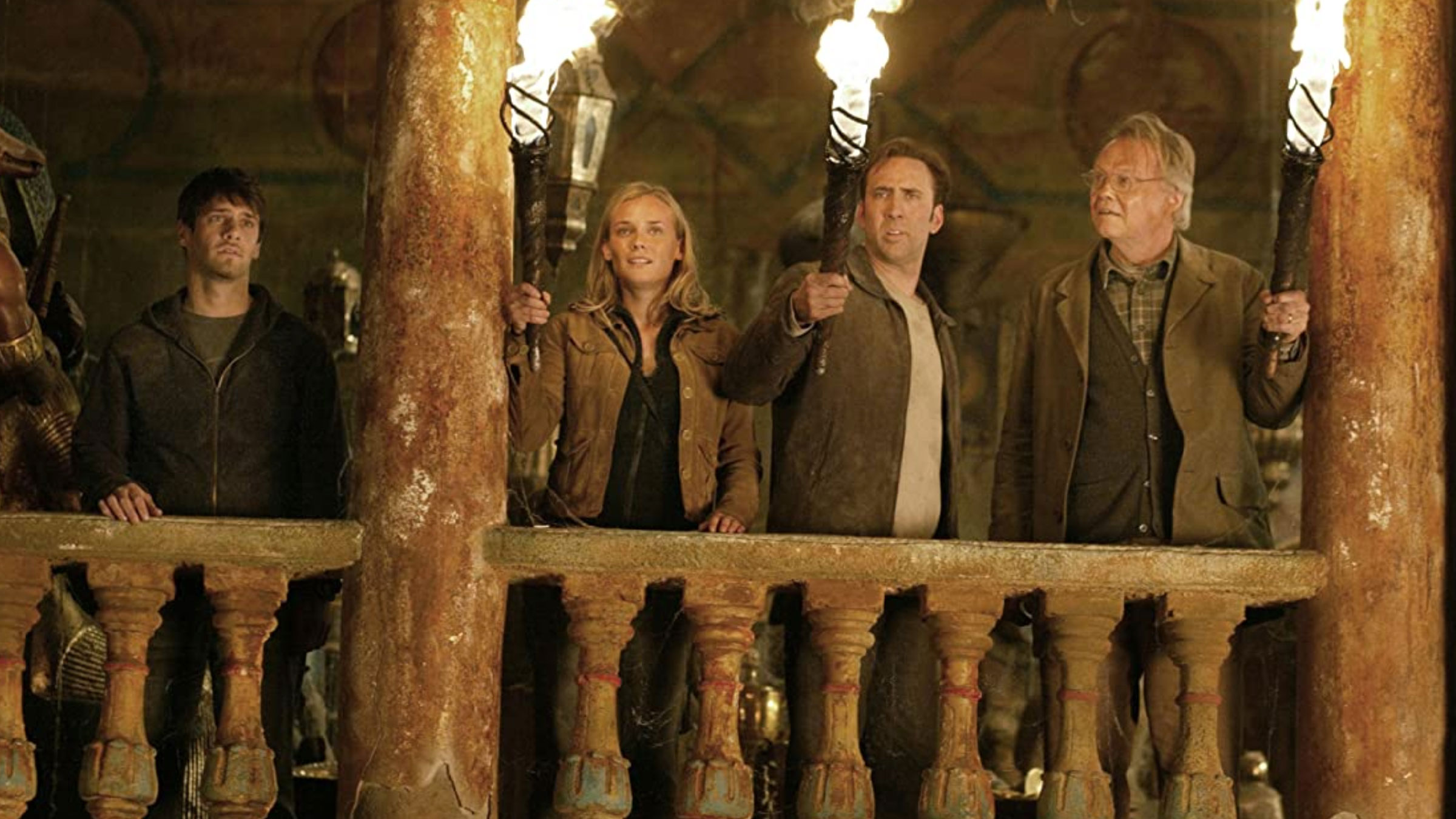 Call it what you will, but I really enjoyed “National Treasure”. Call it a rip-off of “Raiders of the Lost Ark” and the impending “The Da Vinci Code” but put Nicholas Cage in a role and odds are that I’ll come out a happy camper. Cage is one of the most talented and diverse actors working today who can easily pull off Comedy (Raising Arizona, Adaptation), Drama (Leaving Las Vegas, Windtalkers) and Action (Con Air, The Rock). One of my favorite of his movies is actually “Con Air” – a popcorn movie if there ever was one but I liked it. So it wasn’t really a surprise when “National Treasure” became one of the box office successes of late last year pulling in nearly $200 million. Couple this with the golden touch of Jerry Bruckheimer (“The Rock” and “Con Air” with Cage) and it’s most assuredly going to be a financial hit (a critical hit is something different, though). Look closely and you’ll see that even the cast is outstanding with Cage at the helm with Jon Voight, Harvey Keitel, Sean Bean and Christopher Plummer offering supporting roles. “National Treasure” asks the viewer to suspend their disbelief for 131 minutes and if you can do that – you’ll enjoy it.

The movie opens as we see a young Benjamin Franklin Gates (later played by Nicholas Cage) who is enlightened by a story from his grandfather (Christopher Plummer) about a treasure to end all treasures. Flash forward to “Present Day” and we see Gates with an entourage looking for another piece of the puzzle. As it turns out, it’s just that – another piece of the puzzle. Ian (Sean Bean), Gates’ counterpart, is frustrated by the search and only seeks the reward. As a result, he tries to kill Gates to pursue the treasure alone. Gates, along with his computer-nerd cohort, Riley (Justin Bartha), have figured out that the map is on the back of the Declaration of Independence and now they must beat Ian to the punch else the treasure will be lost forever. This is no small task, of course, and they enlist the help of Abagail Chase (Diane Kruger) who unwittingly gets involved in the search for the treasure.

Just like any good heist movie, there are plenty of thrills, mindless action and normal people accomplishing some pretty extraordinary things (i.e. two guys actually stealing the Declaration of Independence), but that’s the fun of it all. Cage is great in these sorts of roles and Voight and Justin Bartha (Riley) offer up plenty of comic relief. Bruckheimer has cast another flawless actress in the female lead though her part could have been played by just about anyone. I have to say that this sort of thing intrigues me and I’m now looking forward to “The Da Vinci Code” as it will surely be more accurate and probably just as exciting. No matter what your taste, “National Treasure” is a fun movie to watch with a fairly believeable plot (have you ever actually looked at the $1 bill?). Simply put, Cage + Bruckheimer = Entertaining movie. Highly recommended.

I remember watching “National Treausre” on standard DVD when it came out a few years ago and being pretty impressed. Luckily that same standard has transferred over to the Blu-ray version of this movie and with a great-looking 2.35:1 AVC HD transfer, there’s little to complain about. Colors are very strong and contrast seems to be improved a bit as well. Being a Blu-ray we can expect that the detail level is bumped up a bit and the entire movie benefits, giving it a near 3-D look to it. Naturally a Jerry Bruckheimer-produced extravaganza will look good and this is no exception. This improves upon the standard DVD (as expected) and is one fine-looking transfer.

Disney gives us a PCM uncompressed mix which more than serves its purpose here. I found the mix to be very robust with some truly great action sequences and tops it off with some very discrete surround effects as well. The score sounds excellent here, adding tension and heightening the mood in nearly every scene. Just as the characters in the film are on a journey, so are we to hear exactly how good this can sound. All in all, “National Treasure” sounds just about as good as anything I’ve heard on Blu-ray and as more films come out, it’s like hearing them for the first time. An excellent mix.

Disney came out with a special edition standard DVD when “National Treasure: Book of Secrets” was released in the theater and we get those supplements ported over plus a few bonus goodies for this Blu-ray release. We get “Mission History”, a 70 minute documentary which chronicles the shoot and a full-length audio commentary with director Jon Turteltaub and Justin Bartha to boot. There is also a trio of featurettes along with an alternate ending available with or without an audio commentary. This is a premier title for Disney and they’ve done it right on Blu-ray.