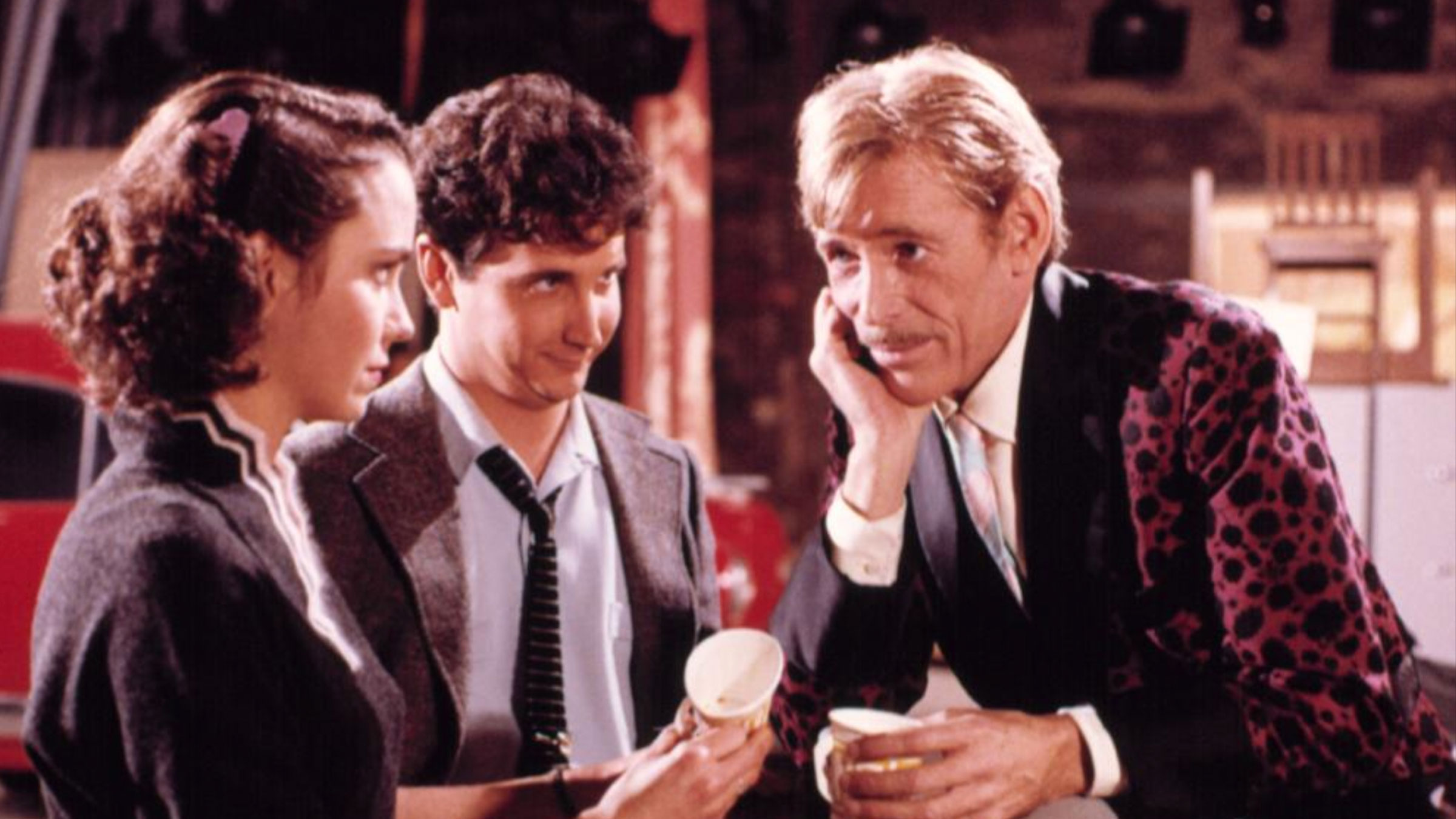 I have always felt that comedy is one of the hardest genres in which to achieve success. If asked to name a few of your favorite comedies, I would guess that a few top your list. If I was to ask you to name a few of your least favorite comedies, I am sure that you have a very long list. Making people laugh is an art form and largely depends on the audience letting their guard down and letting the laughs come naturally. That is difficult business and audiences are incredibly skeptical. I was pleased to see that Warner Archive Collection was releasing the 1982 comedy My Favorite Year. Though I had not seen the film, I had a good feeling that I would enjoy it for two reasons. First, the movie is loosely based on stories that Mel Brooks told about working as a script writer on the Sid Caesar Show. I have always found Mel Brooks tremendously funny and clever, so it was not hard to sell me on that setup. The script was written by his co-writer from Blazing Saddles, Norman Steinberg, with the help of Dennis Palumbo. According to the audio commentary on the disc, Mel Brooks helped to produce the film and also gave some small help on the script which was not credited. Secondly, the film features a central performance from the great Peter O’Toole. O’Toole could do basically anything, and I was excited to see him in a strong comedic role. When my copy of the film arrived, I put my guard down and let the laughs come naturally.

The year is 1954 and junior script writer Benjy Stone (Mark Lynn-Baker) works for NBC at 30 Rockefeller on a show called “Comedy Cavalcade” which stars Stan “King” Kaiser (Jospeh Bologna.) Benjy is infatuated with a woman from work named K.C. Downing (Jessica Harper,) but she does not reciprocate his affection because he comes on too strongly. When Benjy hears that his screen idol Alan Swann (Peter O’Toole) is the guest for that week, he is elated. Unfortunately, Swann has become a womanizing alcoholic and incredibly unreliable. When Swann shows up for his first appointment at the show falling down drunk, Benjy appeals to King Kaiser to let Swann keep his guest appearance. Benjy is tasked with keeping Swann out of trouble for the week, which proves a difficult task. At the same time, King Kaiser has ruffled the feathers of a labor boss by poking fun of him in sketches. This plays out in the background as Benjy befriends Swann.

My Favorite Year is a very well-made comedy. The script is capably written and full of solid punchlines, but the reason the film works is simple – Peter O’Toole is fantastic. O’Toole lands every joke and carries himself with the perfect mixture of charm and mischief that makes Alan Swann come to life. Watching Benjy trying to keep the incorrigible Alan on the straight and narrow is comedic gold. Mark Lynn-Baker is also solid in his role as Benjy, but O’Toole is the main attraction. His prestigious pedigree from films like Lawrence of Arabia helps to sell him as an Errol Flynn-era action star. After watching the film, it will be impossible to imagine what the film would be like without him. I also enjoyed seeing Jessica Harper in the film, because she starred in Suspiria (which I love.)

The direction by Richard Benjamin is solid. He draws good performances out of all the central cast and coordinates the manic energy of the film well. He gets a lot of mileage out of the strong supporting cast. The cinematography by Gerald Hirschfeld is up to the task and evokes the era well. The film manages to come to a solid finale even if some scenes require some suspension of disbelief. Overall – My Favorite Year is a pretty delightful comedy that should please almost any audience. I highly recommend checking this one out of you have not seen it.

My Favorite Year has been given a good-looking Blu-ray transfer by Warner Archive. Arriving with a fresh remaster and presented in 1.85:1 aspect ratio with an MPEG-4 AVC encode, the film looks nice. That said, much of the cinematography by Gerald Hirschfeld is shot with a certain amount of haze. It reminds me of the recent release of the film Fatso. Both films look nice, but the visual style they are filmed in dates the films. This film also has certain scenes where grain and haze overshadow the footage – this occurs rarely but is noticeable. I can’t imagine fans will mind one bit as this is certainly the best the film has looked.

My Favorite Year is an excellent comedy with a sublime central performance by Peter O’Toole. I have always found that comedies are so difficult to get right, and I am pleased to report that this film plays all the right notes. The new Blu-Ray presentation by Warner Archive looks and sounds good, but the visual presentation does have some grain saturated scenes where the quality briefly lapses. The audio commentary is very entertaining and should please fans of the film. Highly recommended based on the quality of the film.