Lady Divine (Divine) runs the Cavalcade of Perversions, a traveling tent show with all manner of distasteful exhibits. Her boyfriend serves as the barker and promises sights that will dazzle and sicken, from licking armpits to eating vomit and all stops in between. Once the audience has witnessed that myriad of performances, they’re taken to a special tent to see Lady Divine herself. While admission to the cavalcade is free, this is where Divine extracts her profits. She holds the audience at gunpoint and relieves them of their jewels and cash. She even shoots and kills one viewer, after she ran her mouth. Her boyfriend protests her violent behavior, but Divine wishes she could slaughter even more people. Her murderous ways have pushed away her boyfriend, who now seeks comfort in the arms of another woman. When Divine finds out, she embarks on a revenge mission of epic proportions, but her boyfriend has a plan also, to kill Divine and be free once and for all.

An early John Waters picture, Multiple Maniacs follows the formula he would build his cinematic legacy upon. A non stop assault on “decent” society, the film travels anywhere it can to offend and satirize the so called polite world. Divine heads up the attack and is fantastic here, giving a manic and show stopping effort in the lead. Her breakdown after killing several people is quite an experience, as she foams at the mouth and goes on a destructive rampage of blood lust. The movie has other wild scenes as well, from giant lobster rape to an infamous use of a rosary for anal pleasure. So Multiple Maniacs doesn’t hold back on the shock value, to say the least. The production values might be low, but the entertainment value is high and the creative sense of rebellion is remarkable. Multiple Maniacs was only Waters’ second feature, but it has all the elements fans of his work could want and more. I’m thrilled that Criterion chose to pick up this movie, I can only hope more trash cinema could be in the works. If you’re a fan of Waters or off the rails cinema in general, Multiple Maniacs earns a high recommendation.

Multiple Maniacs is presented in 1.66:1 widescreen. This transfer looks incredible, given the low rent roots and less than ideal storage conditions of the elements. You’ll still see some wear and defects, but the visuals really shine through. The print looks light years cleaner than ever before, with more detail visible and a stable overall presence. Another knockout treatment from Criterion.

The original mono soundtrack is here and sounds better than ever. This release corrects the audio imbalances that plagued the film, with overly loud dialogue that lessened the entire sound design. That is solved here and the movie seems to have all the elements in proper balance. You can still tell the cast was shouting their lines, which is good, but it no longer hinders the sound presence. A clean presentation that fans will greatly appreciate. 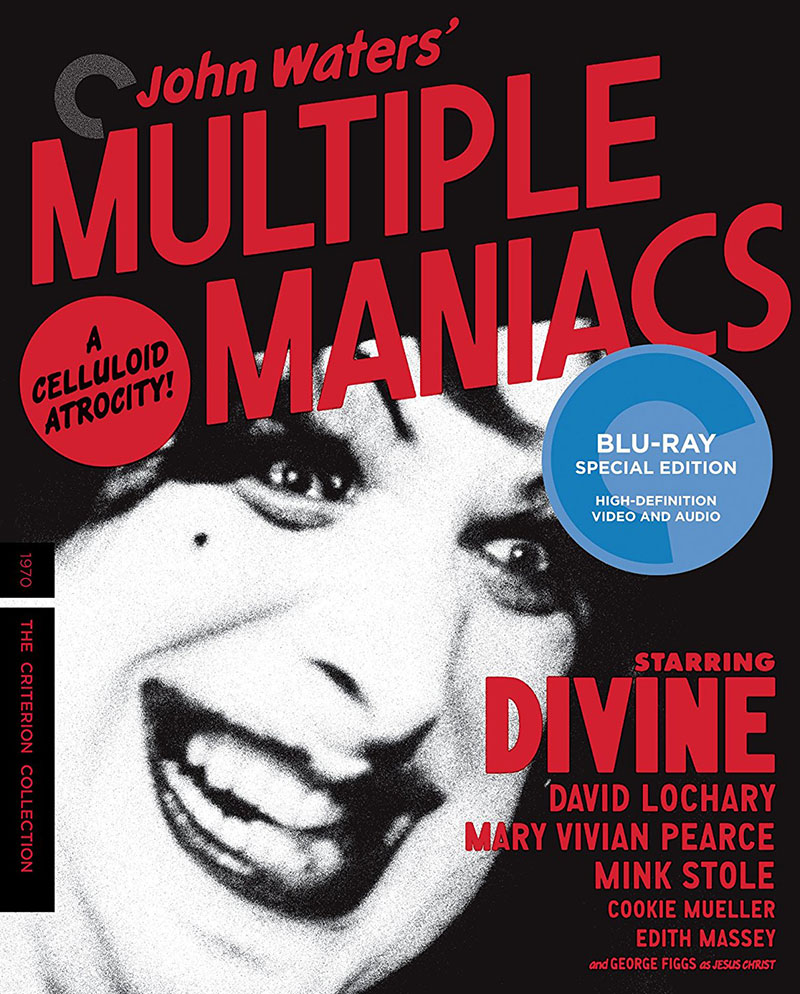