You would likely make your head hurt if you were keeping tabs of all the release dates Monster Trucks had. I recall seeing the trailer for it in 2015 in front of the Point Break remake, but it wouldn’t be until almost a year later that it would finally hit screens this past January. While I’m no longer the target audience for this sort of film, it did look at least semi interesting. I admit the creature itself isn’t the most attractive, but it at least seemed like something different than the usual family fare. I’m reminded of films of this sort from the 90’s where our lead character discovers a friend, but must keep it secret. The big difference here is that the creature is entirely CGI. Paramount pictures actually took over a $100 million in losses before the film hit theaters. It’s hard to succeed when the odds are so stacked against you. While the film isn’t terrible, it also isn’t very good either. It’s harmless, yes, but it’s just so hard to get invested in a CGI character who is pretty harsh on the eyes. It doesn’t help that the lead creature really doesn’t have much of a personality. The performances from the lead actors are also a bit underwhelming as well. While I appreciate a film in this day and age at least attempting something different, Monster Trucks is ultimately a letdown. Let’s dive into things now.

Tripp Coley (Lucas Till) is a senior in High School who works in a scrap yard. Unfortunately for him, he doesn’t own a vehicle. Instead, he has to ride a bike everywhere he goes. He seems to be popular with fellow classmates, yet puts his work before anything else, including school work. He manages to put together a monster truck out of old parts. There’s a nearby oil spill that causes some concern. It also brings forth an unusual creature that Tripp eventually names Creech. Tripp’s ultimate goal is to leave the town and start anew. Jane Levy stars as Meredith, a fellow classmate of Tripp’s who is also his tutor and the love interest. She learns of Creech and eventually it’s up to both of them to keep it secret and get Creech back to his family. There’s no shortage of talent here as we get performances from Barry Pepper as the town sheriff, Rob Lowe as the obligatory villain as well as Danny Glover. He plays Tripp’s paraplegic boss who assists him. Eventually, Creech gets inside Tripp’s monster truck and is used as the transition for it. It’s all more than a bit silly, but sadly, the film is mostly a dull affair. Outside of a few instances, I was surprised by how few references we get to smartphones. We see Tripp snap a pictures of him and Creech, but otherwise, the modern technology is vacant. There’s aren’t any references to social media either. I enjoyed that element as it was refreshing to see a film refrain from the usual expectations. Still, I just found myself strangely uninterested in much of this. I hope to enjoy it more, but it left me detached through much of it. Creech can seem a bit cute at times, but it’s just not the most interesting creature. All things told, there might be a certain audience for this film, but it’s strictly for the young ones. I’d recommend the recent Pete’s Dragon over this outing as it’s a similar type of story, but told with much more heart and craft.

Quite nice actually. The AVC encoded (2.39:1) transfer satisfies on all fronts. The setting of the film has a lot of mountains and nice visuals throughout. It makes for lots of strong details and the transfer delivers that. The print is pristine and the effects really aren’t half bad. Background shots remained strong and smooth throughout and flesh tones even and smooth. The details on the trucks and various vehicles in the film were also strong and clear throughout. I can’t find any major issues to speak of. Fans will be pleased with the results here.

We get a Dolby Atmos track that’s universally satisfying. The rear channels stayed active throughout. I’ve noticed a lot of recent films really making me feel involved, and this is no exception. Vocals were strong as expected with a crisp quality to them. All things told, this track gets the job done.

All of the supplements are found on the Blu-ray, making them all exclusive. The DVD is featureless so if you want to watch the film in inferior sound, picture and without supplements – your wish has been granted.

Neither great nor terrible, Monster Trucks is far from the disaster you might expect considering its various release date changes and production history. Still, there’s not much great about it either. I do appreciate that it attempts something different, but the plot is fairly routine in its construction and the creature itself is a bit hard on the eyes. The pre-teen crowd might enjoy it, but I’d recommend the recent Pete’s Dragon remake before this one. 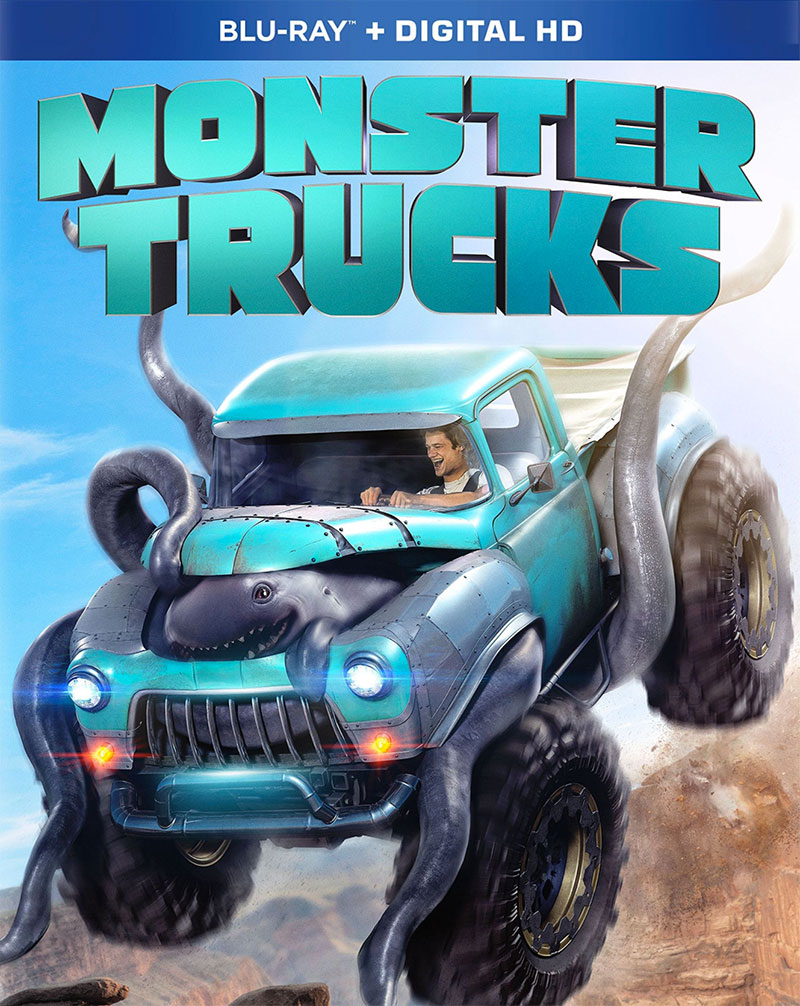