Nearly two decades ago we were treated to the first installment of what is now an amazingly profitable franchise. Mission: Impossible was one of the earlier television shows to get the movie treatment and it’s an example of one that was done right.  Though the plot to the first one was a bit of a head scratcher, it nevertheless inspired a sequel four years later and another one in 2006. At that point, it looked like that might be the end of things. But Hollywood isn’t known for trashing films that make money and if Tom Cruise wants to do something, it gets done.  So, in 2011, Mission: Impossible – Ghost Protocol was made and was a raving success, both critically and commercially. It was only a matter of time before we saw Cruise and the gang back and that wait is now over. Teaming with Writer/Director Christopher McQuarrie (who had worked with Cruise on Jack Reacher), we saw a revamped MI team. Let’s fire up the Lalo Schifrin score, get our disguises ready and choose our mission – should we accept it.

Ethan Hunt (Tom Cruise) and his rag tag team (leftover from Ghost Protocol) are going about business as usual. Benji (Simon Pegg), William (Jeremy Renner) and series regular Luther (Ving Rhames) have fought the forces of evil on several prior occasions and have emerged victorious. However this doesn’t sit well with the new Director of the CIA (Alec Baldwin) who petitions to a Senate committee to have the IMF shut down. He gets his way and the search begins for Hunt to come back to Langley and debrief. Hunt, of course, will have no part of it and goes…wait for it…rogue! As it happens, Hunt meets his female equal in Ilsa (Rebecca Ferguson), a British operative who Hunt can’t quite figure out. They reluctantly team up in hopes of shutting down The Syndicate, a global organization composed of former special agents.  Hunt’s mission is a bit more personal, but at the end of the day they’ve got to recover a ledger, avoid being killed and not be captured. At this point, will anything surprise us? Doubtful.

At this point in the franchise you’d think that things might be dull and predictable. You would, of course, be mistaken. In fact, the Mission: Impossible movies seem to get better and better. I’d say that part of the reason might be Cruise’s teaming with Writer/Director Christopher McQuarrie. The two had previously worked on Jack Reacher together and McQuarrie helped co-write both this and Edge of Tomorrow. With a sixth installment set, the MI films don’t seem to show any signs of slowing down. The cast seems to work well together and about the only thing I think might need to go is Ving Rhames – his inclusion seemed more nostalgic as opposed to necessary. Nevertheless, the movie fires on all cylinders with an amazing opening sequence and an edge-of-your-seat underwater sequence.  This gives fans more of what they want and that’s what makes these films great.

Having watched all the Mission: Imposible recently, it really is amazing at how little Tom Cruise has aged in two decades. I guess that’s what makes him a movie star, right? The latest installment features a 2.40:1 HEVC 4K image that’s just a bit shy of perfection. I was concerned for a few minutes when I noticed a fine layer of grain over the entire picture. It wasn’t so much that it was distracting, but these days I’m so used to seeing everything looking so amazingly perfect, it’s a shock when you see something that might be a…flaw! Nevertheless, this looks amazing, the details are intricate (we can see all of the LED displays in perfect clarity) which make for a great picture. The movie is a globe-trotting experience for sure, we get shots of Cuba, parts of Europe and of course the arial shot of DC and Langley, VA. We know what we’re in for and this looks amazing – as expected.

Finally! The first four installments of the Mission: Impossible franchise were lacking in one thing – a Dolby Atmos mix. And now, at long last, we’ve got on. The only thing is that this was present on the previously-released Blu-ray. Nevertheless, there are countless of chase sequences and everything else that make the MI movies so memorable. Each make extensive use of each and every one of your 7.1 channels. It’s always nice to hear the LFE stand up and take charge – the poor thing – it goes mainly unused in so many other movies, so it’s a refreshing change of pace in a film like this where their presence is known.  Directional effects are all over the map, bullets whizzing by, gunshots fired…you name it. Vocals are rich and deep and surrounds are constantly churning adding support (not like it’s needed) to the already robust mix. They literally don’t get any better than this on the audio front.

Nearly two decades after the first Mission: Impossible movie, the franchise is as strong as ever. The front of the box proclaims that this is better than Bond and better than Bourne though I’m sure many will disagree. Still, these films continue to deliver action, excitement and interesting plots that don’t ever seem to get old. That and the ageless Cruise is pretty impressive (and now in his 50’s). The disc is excels on all technical merits and has enough supplemental material to warrant a purchase, for certain. 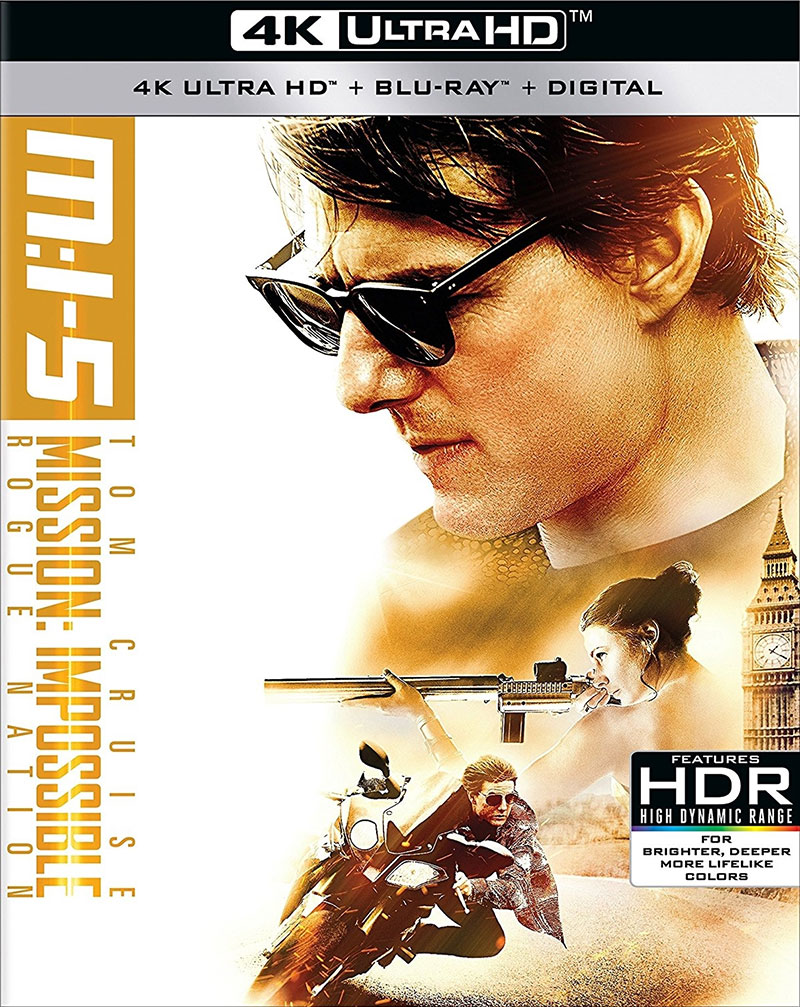