With the success of Mission: Impossible, a sequel was inevitable. And, bear in mind, this was in the days that not everything that managed to break even at the box office merited a sequel. But fans would have to wait four years for Tom Cruise to reprise his role of Ethan Hunt (and in a first for Mr. Cruise, this was his first time playing the same character in a different movie – in other words, his first sequel). Cruise served as the first film’s Executive Producer, proving that he’d no longer be an actor looking for work – not that it was a problem. Since the first installment, he’d garnered an Academy Award nomination for his role in Jerry MaGuire, made a film with Stanley Kubrick with Eyes Wide Shut and managed to turn in a great performance in Paul Thomas Anderson’s Magnolia. Yes, the late 90’s were very kind to Tom Cruise. But now with a shaggier ‘do and a new director, John Woo, Cruise was set to gather a new IMF team and once again save the world.

The plot is much easier to figure out than the first one as Ethan Hunt (Tom Cruise) and his newly-gathered team of IMF agents are out to stop a deadly lab-made virus called “The Chimera.” Hunt’s team must find an ex IMF agent, Sean Ambrose (Dougray Scott) and keep tabs on his former lover, Nyah (Thandie Newton). She’s a professional thief and she’s good at what she does. Returning is computer hacker Luther (Ving Rhames) to take the tech-part of the job and add some more testosterone. So, yes, it’s a team of three that’s out to save the world once again. That’s basically it. Robert Towne’s screenplay is vastly different from the first in that it’s much easier to understand. And, of course, to tell anything more would be to give away the plot and we don’t want to do that.

It’s safe to say that Mission: Impossible II is probably the “worst” of the series. It’s not bad, per se, but rather more polarizing than the others. Brian de Palma, who helmed the first installment, has been supplanted by John Woo best-known for his slow-motion sequences and stylistic vision. Woo had just come off a successful directorial effort with 1997’s Face/Off and that, in no small part, was most likely the reason for his casting. The real scene-stealer was Thandie Newton who has shown us that she’s not just another pretty face and has managed to carve out a relatively successful movie career.  If it’s action you’re after, Mission: Impossible II delivers it in spades. It’s just a matter of how much of a fan you are of carefully orchestrated, slow-motion action sequences that feature Tom Cruise sliding across the floor with pistols firing in both hands. If that’s your bag – you’ll have a blast (pardon the obvious pun).

If there was one film in the Mission: Impossible series that I was curious to see on 4K, it was this one. I happen to be a fan of John Woo and his particular “style”, and was anxious to see how that translated to the new Ultra HD format. As it stands, pretty darn good. From the opening scene in which we see Tom Cruise’s Ethan Hunt scale a rock face to some of the slow-motion action sequences that show the star’s flowing locks in the wind. The film has a bit more sheen to it and the increased color depth really give it some new life. The 2.40:1 HEVC 4K image pulls no punches and it’s a nice tip of the hat to Paramount for christening this set. Fans will be pleased, for sure.

Another film and another missed opportunity. Mission: Impossible II features the same Dolby TrueHD track that was on the previous Blu-ray. As I often say, that’s not to suggest that it’s bad by any means, it’s just that it could have sounded a lot better with a new Dolby Atmos mix. There’s no shortage of action, though, and your speakers (particularly the LFE) will get a workout. Dialogue is clear and crisp, directional effects add some ambiance to several action scenes. Tires squeal, bullets whiz by…you get the idea. It wasn’t a let down, but with the effort to bring these films to this new format, a new sound mix wouldn’t have hurt.

Again, we don’t get any new features with this new offering, rather they’re the same supplements that arrived with the Blu-ray (or maybe even the DVD, I can’t remember).

It would be another six years until we were graced with Mission: Impossible III and another five until the fourth installment. This movie has an audience, no doubt about it, but it could have easily ended here. Thankfully Cruise has an affinity for the series and his character and it’s amazing what you can do with virtually unlimited financial resources. Fans of Woo’s choreography will be in heaven, while others simply need this to fill out their MI collection. 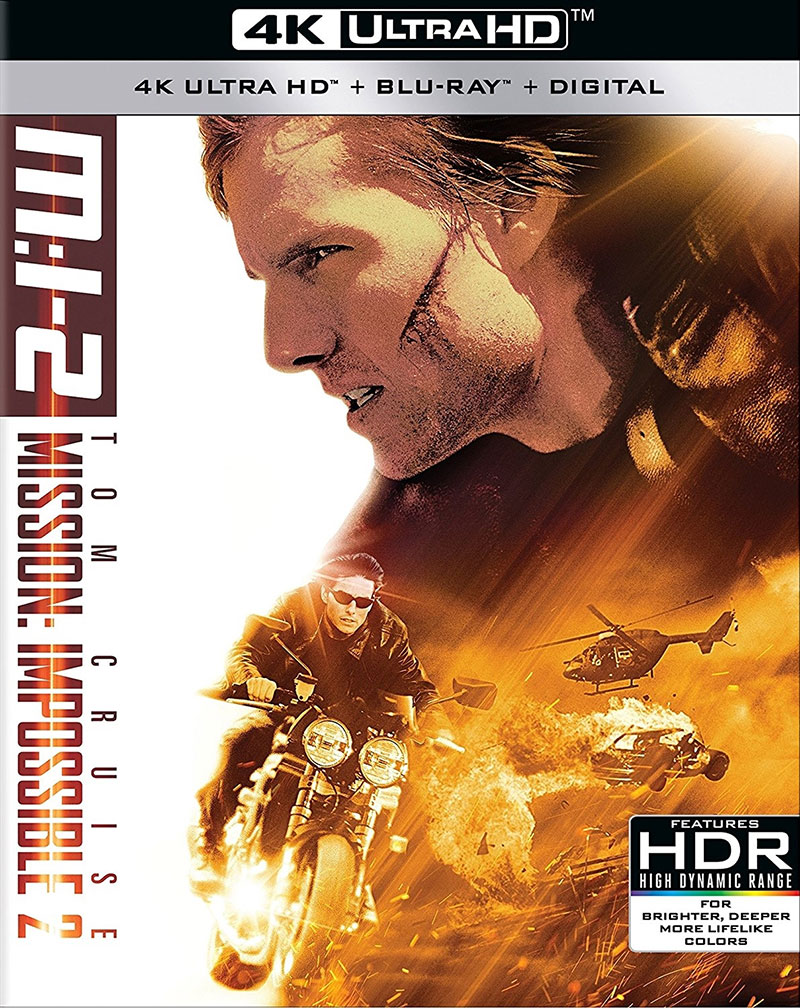