Who’d have thought, in 1996, that the Mission: Impossible franchise would still be going strong? Actually, let’s take a leap back three more decades and ask that same question? I’m pretty sure the answer to both is a resounding “No.” But, here we are, 2012 and the end of the world looming and lo and behold we’ve got a fourth Mission: Impossible film and wouldn’t you know it – it’s widely considered to be the best of the franchise. Who said that things don’t improve with age? Our lead actor, the indelible Mr. Tom Cruise, has had some highs and lows since the first couple of films – most notably his “couch jumping” and his profession of love for Katie Holmes on Oprah’s show (circa 2005) and the cast has changed – again. Still, we have to ask ourselves what it is about these films that keeps drawing us back in. Is it that unmistakable theme music, courtesy of Lalo Schifrin? The impossible odds that the IMF team faces? Or is it that we simply like to be entertained? Whatever the reason, our mission – should we choose to accept it, lies ahead.

In this fourth installment we find Ethan Hunt (Tom Cruise) in the midst of one of the IMF’s missions. As much as we’d like to think that things always work out for Hunt and his team, that’s just not the case. An agent (Josh Holloway) is gunned down, things go awry and wouldn’t you know that the Kremlin itself is partially destroyed. The IMF is held accountable for this wrongdoing and has now been cut off from any and all government support. It’s up to Hunt and his band of merry men (and woman) to find out who’s responsible for the bombing of the Kremlin, but restore the name of the IMF and make it out of everything, well, alive. And on the surface, that’s it. A lot easier than trying to figure out the first movie, wasn’t it? Of course there are plenty of action sequences, an amazing scene in which Cruise scales the Burj Khalifa (aka “The Tallest Building in the World”) and disguises galore. Let’s face it, if you’ve seen any or all of the previous films then this is one that you simply can’t miss.

As previously mentioned, the cast (apart from Cruise) is all new. We find Simon Pegg fully comfortable in his comic relief role, Jeremy Renner delivering another strong performance and the lovely Paula Patton in the role of the vixen. I won’t say that some familiar faces don’t appear, but by and large this quartet is what makes the movie run. The most recent director is Brad Bird. Yes, that one. For those that don’t know, Bird came from the world of animation and has directed such favorites as The Iron Giant, The Incredibles and Ratatouille. Nevertheless, whatever Bird’s roots it appears as if he’s transitioned to the role of “live-action” director quite nicely. Whatever your personal feelings for Tom Cruise or the Mission: Impossible franchise in general it can’t be denied that this latest installment is as entertaining as they come.

I vent about the audio below, but there’s no denying that the 2.40:1 HEVC 4K image really does look, for lack of a better term, perfect. Colors pop, blacks are black and contrast is right on the mark. Would you expect any less? Me neither. I think the bar has been set so high with some of these new (and old) releases, that anything less is unacceptable. The detail is amazing, we can see the ever-growing wrinkles in Cruise’s forehead, the scruff in his five o’clock shadow and all the little bells and whistles in the gadgets that the IMF team has in stock. It’s a top notch transfer and one that won’t disappoint.

Ok, I was willing to give the first Mission: Impossible a pass on (lack of) Atmos soundtrack due to its age. And I was even willing to do the same with the second (2000). The third was a pretty big disappointment, but with this installment -there really is no excuse. This movie was released in 2011 and there simply is no reason that this disc shouldn’t have a Dolby Atmos mix. But all my whining can’t and won’t do anything, so with that said…Dialogue is clear and clean, the discrete sound effects add a layer of tension and excitement to the mix and there are plenty of “in your face” moments that make this one of the most ambitious mixes. Put it this way, my wife (who watched this with me) turned around on multiple occasions when a surround channel was engaged. If that’s not the mix doing its job, I don’t know what is. Still, to know that it could (and should) have sounded better is a real disappointment.

This Ultra HD version takes the previously-released two-disc version (for a time, only available at Best Buy) and ports over all of those features. As expected, nothing new has been added.

Half a dozen years passed between Mission: Impossible III and Ghost Protocol (aka “Mission: Impossible IV“) and it’s safe to say that it was worth the wait. Director Brad Bird, well-known for his work in the world of animation, proved that he had what it took to get the job done in the live-action realm.  This acted as a pseudo “reboot” for the franchise much in the same way that Fast and Furious (2009) did for that one. While it’s once again disappointing that there are no new supplements included or a new audio mix, the uptick in video quality makes this one an integral part of your 4K Mission: Impossible collection. 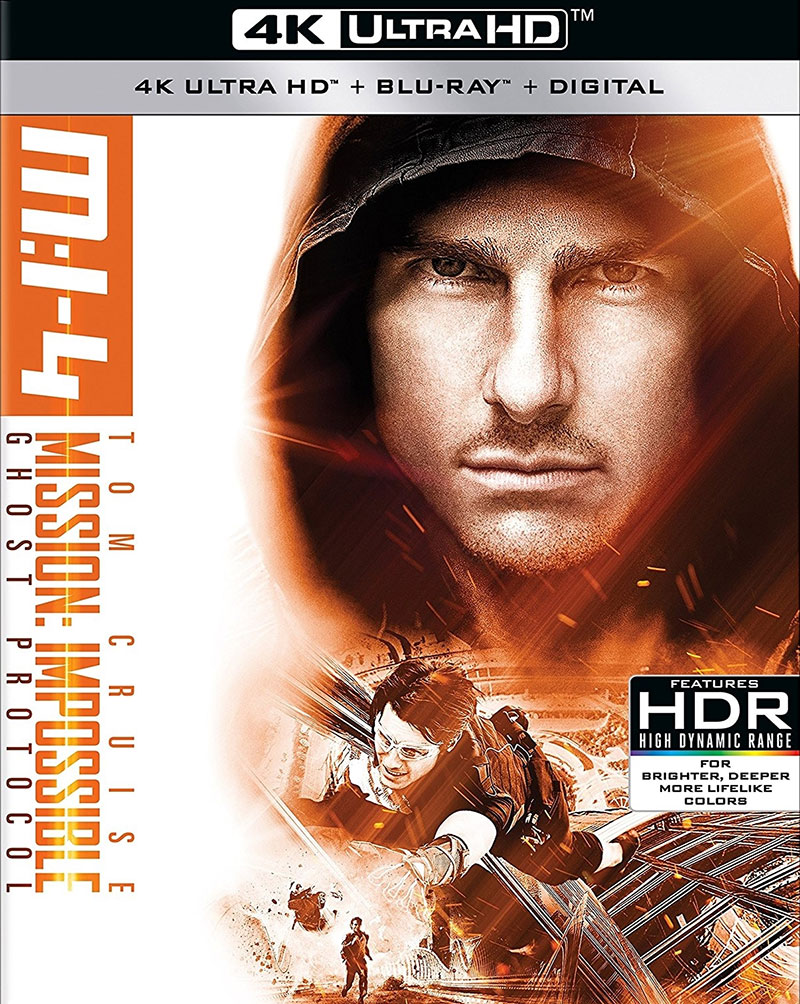