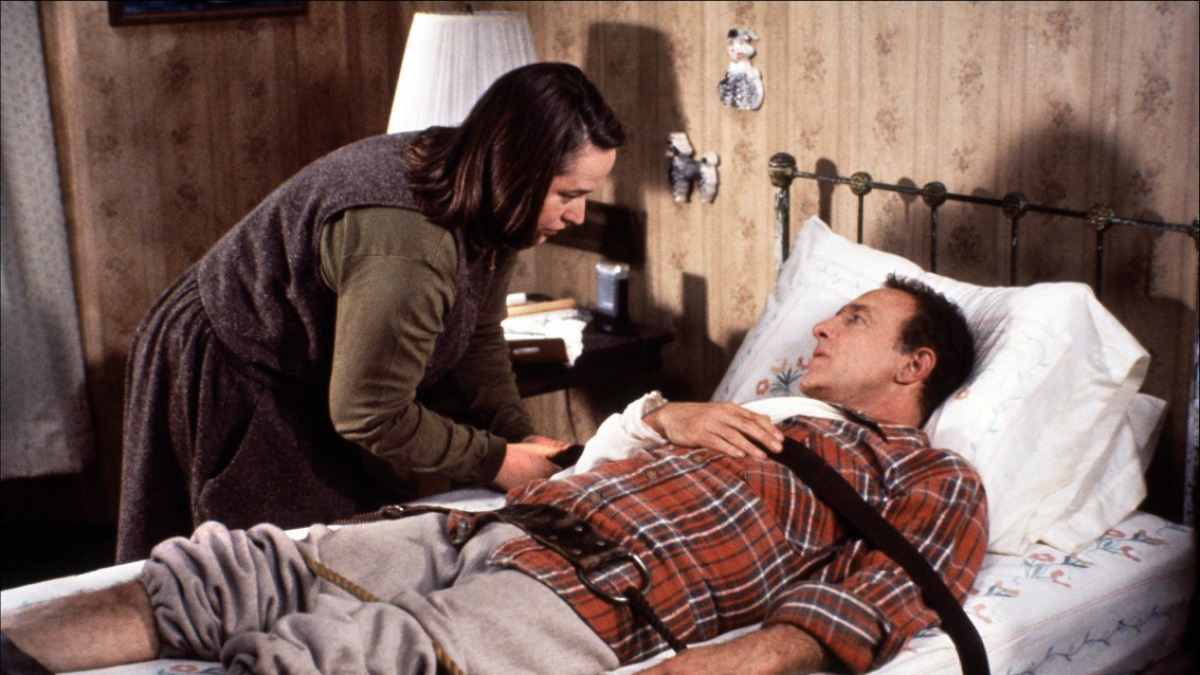 Paul Sheldon (James Caan) has made his reputation as a writer thanks to a character named Misery, the star of his series of historical romance novels. While the series launched his career and made him famous, he is ready to move on and leave Misery in the past. In his last novel, Misery died and now Sheldon is headed to his cabin in the woods to write his new novel, one that allows him total creative freedom. But a snowstorm interrupts his trip and a brutal car wreck follows. Sheldon sees little chance of a rescue, but a woman named Annie Wilkes (Kathy Bates) manages to find him and take him to her home. She cares for him and even happens to be a fan, though she hasn’t yet read his latest Misery novel. When she discovers Misery’s death, her persona turns from bright to pitch black. Now Sheldon finds himself held captive, tortured, and threatened with worse, but can he survive his capture or will his biggest fan turn out to be his final critic?

In the annals of cinematic psychopaths, Annie Wilkes is one of the top bananas. Kathy Bates’ intense performance drives Misery, in a turn that earned her a Best Actress Academy Award. She more than earned her statuette, as she is dead on here and proves to be one of the most terrifying characters around. No need for a hockey mask or razor sharp claws, Annie Wilkes just needs her hammer and unsettling presence. James Caan is also quite good here, able to play off Bates well and that’s good, since the bulk of the film is just the two of them. This is a thriller to be sure, but it is a slow burn. The atmosphere is intense and the tension is ratcheted up, moment by moment, until the boiling point arrives. So if you’re looking for a movie to send chills up your spine, Misery would be an excellent choice.

Shout Factory! (under the moniker of Scream Factory!) has given the film a new 4K restoration and it’s immediately noticeable when the disc is inserted. If you didn’t know better, you might think this was a recent release, as the print looks great and the image is quite refined. The detail is impressive, if a little lacking when compared to some of Blu-ray’s finest. Even so, the depth is excellent and the detail puts all previous editions to shame. No issues with color, contrast, or digital errors, just a sharp, clear visual presentation from start to finish.

Two DTS HD Master Audio tracks are included, a 5.1 mix that appears to be the same one used on the previous Bli-ray, and a 2.0 mix that more than serves its purpose. Even so, all of the elements come through well here. The dialogue is crystal clear and never harsh, while the musical score sounds good too and never overpowers the other audio ingredients. Not much else to discuss, aside from a couple of scenes that pack a punch and of course, they’re well handled. This release also includes Spanish and French language tracks, as well as subtitles in English, Spanish, and French.

While the former Blu-ray was lacking in supplements, this new version more than suffices.

Kathy Bates (rightfully so) won the Oscar for Best Actress for her portrayal of Annie Wilkes. In a year that saw Whoopi Goldberg win for her role as a pseudo psychic in Ghost, it was quite an interesting year for the Academy. Seeing this movie nearly 30 years later, it’s aged very well. Bates’ character is still as eerie as ever and I still found myself tense and taut by the time the infamous “hobbling” scene came around. Scream Factory has loaded this up with supplements, improved the picture and given us no reason not to pick up a copy.