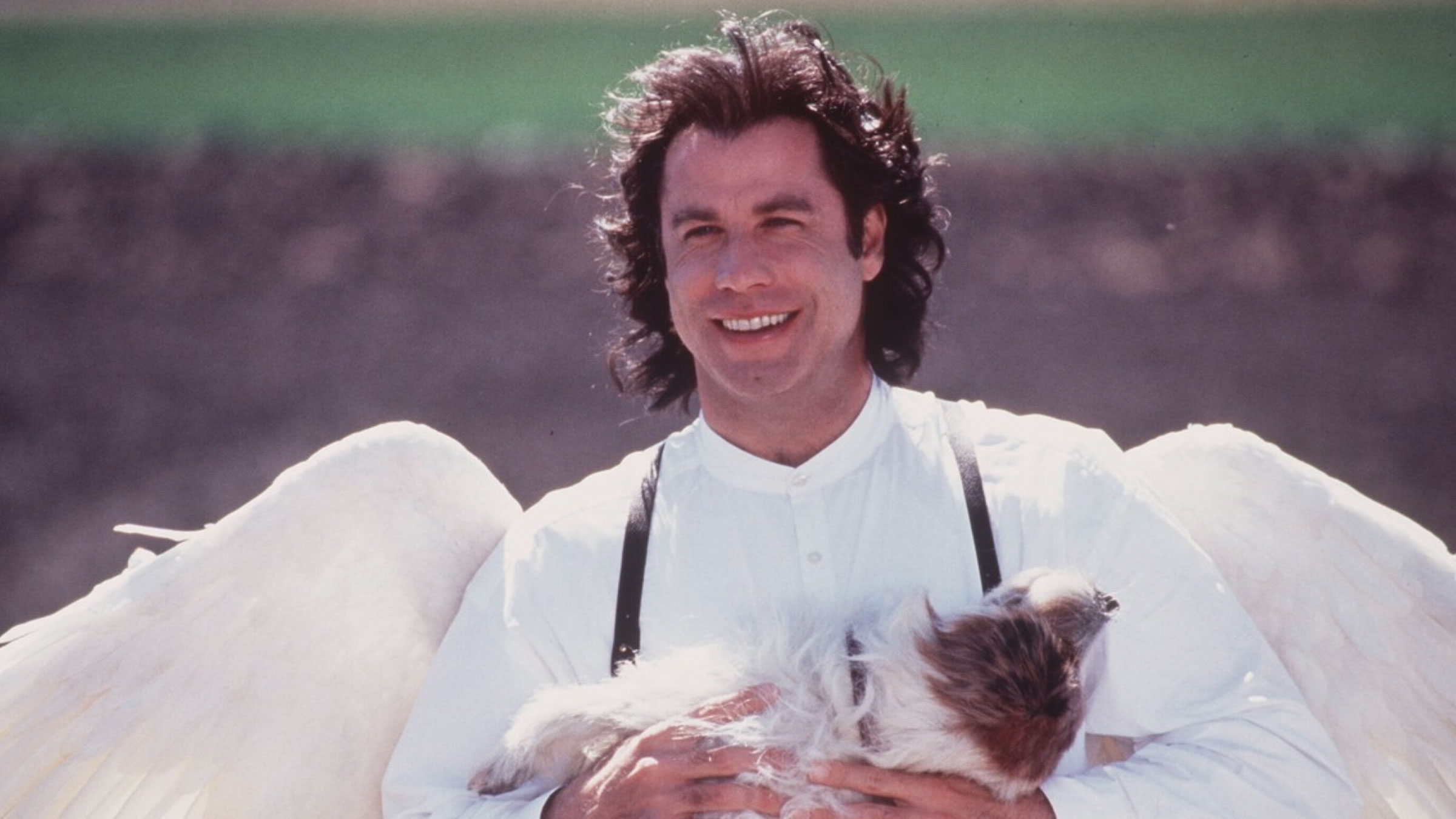 They don’t call John Travolta “The Comeback Kid” for nothing. Early in his career, Travolta had hits like Grease and Saturday Night Fever. And then he was off the map. Later in the 80’s he had a minor resurgence with the success of Look Who’s Talking and its sequel, Look Who’s Talking Too. And, then again, nothing much happened. But then Quentin Tarantino’s Pulp Fiction came around and, well, the rest is history. Travolta got an Oscar nod for his role as Vincent Vega (he lost to Tom Hanks in Forrest Gump) but the die was cast. The success of the film paved the way for a string of films starting with Get Shorty and he starred in no less than three in 1996 alone (Broken Arrow, Phenomenon and Michael). Add to this, director Nora Ephron’s Sleepless in Seattle was still fresh in everyone’s minds as was Andie McDowell’s Groundhog Day and Four Weddings and a Funeral. Suffice it to say that, on paper, Michael should have been much more than it was. The question we had to ask ourselves was this: what happened?

Travolta plays the titular character – an angel named Michael. Two tabloid reporters from Chicago, Frank Quinlan (William Hurt) and Huey Driscoll (Robert Pastorelli) are assigned to go to Iowa and follow-up a report of an angel. Sent to accompany them is an “angel expert” Dorothy Winters (Andie McDowell). The rumors are true. Michael is really there and he really is an angel. This is to be his last trip to Earth and he’s making the most of it. The nitty gritty is that angels are only allowed 26 visits to Earth. Michael’s a beer-chugging woman magnet who loves to quote The Beatles and his real “mission” is to get Dorothy and Frank to fall in love. They’re the main stars of the film and they argue – so it’s a lock. And, of course, we have to ask ourselves if this will ever happen? Of course it will.

There’s a lot to like about Michael and Travolta delivers a good performance. And he dances. We all like it when he dances. The main issue I had with the film, and I’d never seen it until now, is its predictability. We all know that this was a vehicle for Travolta and even with the star-studded ensemble cast, it was all about him. And that’s fine – he was great in his part. It’s light-hearted. It’s offensive, but not too offensive and had all the elements that made Sleepless in Seattle work. But…it wasn’t that film. The movie came out in the holiday season of 1996, so it was well-timed and it did well, raking in nearly $100 million at the box office. While it wasn’t Travolta’s greatest work, there are some fun moments. Why it took so long for this film to come to Blu-ray is beyond me. Oddly, this was one of Warner’s first DVD’s back in 1997 when the format was in its infancy. Go figure.

Having never seen the film before, I had nothing to compare it to. I might have seen a few scenes here and there while channel surfing, but I digress…The 1.85:1 AVC HD presentation looks, by and large, pretty good. I noticed some grain in a few spots and some of the outdoor scenes seem a bit dingy. But there seems to be an overall sharpness and clarity (especially for a film nearly 25 years old) that I hadn’t expected. Fleshtones seem warm and natural, as does contrast. It’s a solid, fine effort from Warner.

This one isn’t one to write home about, though the included DTS HD Master Audio mix does have a few moments.  Vocals are strong and pure, surrounds kick in a few times for some added ambiance and the front stage seems busy with the rest. It’s a pretty standard (by the book) mix that gets the message across, but also serves as nothing too memorable.

Unless I’m missing something, Michael is a featureless offering from Warner Archive.

While not Travolta’s best work, there’s still a few things to like about this one. True fans have been waiting for quite some time for this to appear on Blu-ray and that wait is over. It looks good, sounds good, but the lack of features might be a turnoff.