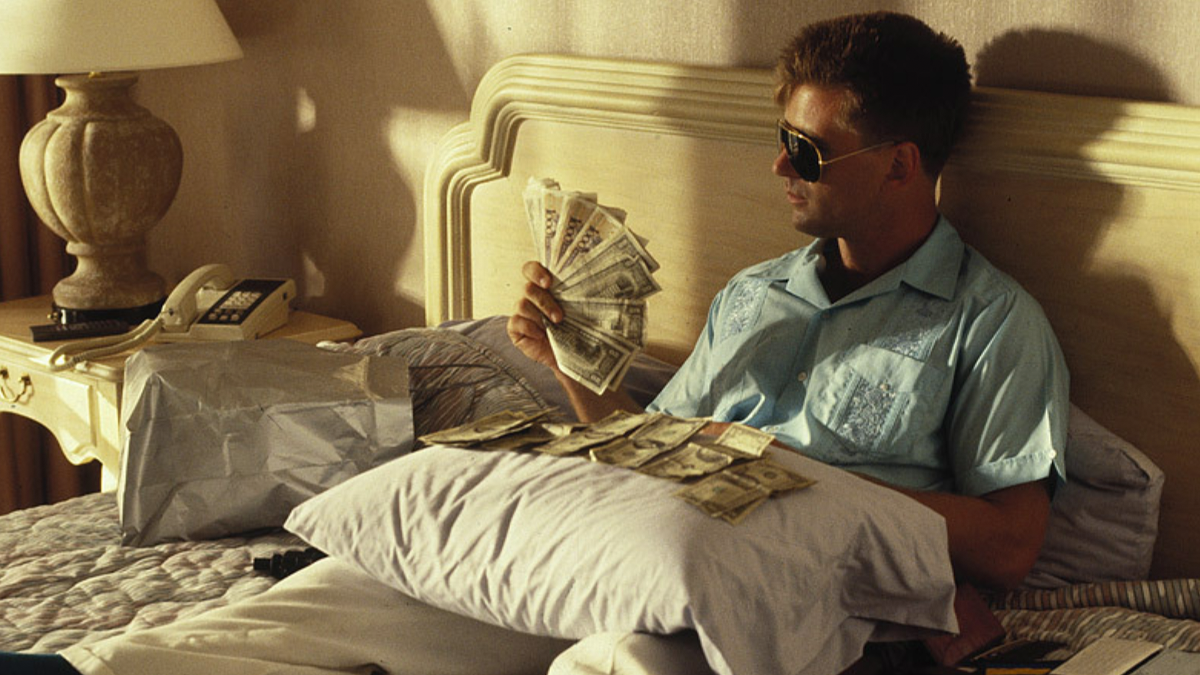 Time changes everything. When I was about sixteen or seventeen years old, I rented an Alec Baldwin film that had always made me curious at the video store called Miami Blues. Already desensitized by films like Pulp Fiction and Fight Club, I found myself enjoying Miami Blues but a little confused by some of the film’s themes and its mixture of dark comedy and violence. It just didn’t grab hold of me like those films had. The film seemed to exist without a true hero but instead a group of quirky misfits that were sort of thrown against one another. For some reason or other, I never forgot the film despite not attaching a lot of thought to it – probably due to its strange nature. When I saw that Shout Factory was releasing it on Blu-ray, it seemed like a good time to re-evaluate it. Before viewing the film, I bought a cheap paperback copy of the Charles Willeford novel on which it was based and read it while on vacation. Lo and behold, I loved the novel.

Ex-con Frederick J. Frenger Jr. (Alec Baldwin) arrives in Miami. He has an assumed identity of Herman Gottlieb and is sporting a suede jacket he bought with the man’s money. As soon as he gets off the plane he is approached by Krishna Ravindra and is asked what his name is. Junior responds “Trouble,” as he bends back and breaks the monk’s fingers. Leaving the scene of the crime, he has no idea that the monk went into shock from the assault and died. Hoke Mosley (Fred Ward), a local homicide detective with dentures , is assigned to the case. Arriving at a hotel, Junior requests a hooker from the bellman. The hooker is a young and sweet girl named Susan Waggoner (Jennifer Jason Leigh.) Junior begins to court her as the police begin to investigate the death of the monk. When Junior comes face to face with Hoke, they have a long dinner full of beers. The next day, Junior tracks Hoke down and beats him up. He steals his badge, gun, and dentures and begins to pretend to be an officer on the streets of Miami – stealing from thieves and making “arrests.”

Now that I am older, I really enjoyed Miami Blues. First and foremost, it is a pitch-perfect adaptation of the novel on which it is based. Fans of the wild and inventive writing of Willeford from the novel will see that the same madcap energy of the novel translates well to the screen. No major plot points are left out and the dialogue in the film is true to the book. This is a film that revolves around three characters and it is a prime example of casting that makes sense. Alec Baldwin is dynamite in the lead role. Baldwin understands his character and delivers the goods in every scene. Baldwin has always been a great actor and he elevates the role with one of his strangest and most electric performances. He is exceptional in the film. Jennifer Jason Leigh gives a standout performance as the sweet and naive Susie. I can’t think of any role that she has taken on that eclipses her work here. It’s not an easy role and she plays it as heartbreakingly sweet and sad as it could be played. The final piece of the puzzle is Fred Ward. Fred Ward has an excellent voice for the role. He makes this strange role seem effortless even though it is anything but easy to convince people when playing such a madcap character. He nails it.

For both script and direction, I tip my hat to George Armitage. It is worth pointing out that this film came out a full two years before Tarantino released Reservoir Dogs and the indie cinema scene overnight became more violent. This film is closely linked to another film from 1986 named Something Wild. Miami Blues has a similar energy to it and is in fact produced by Jonathon Demme who directed that film. Fans of that film will find themselves right at home. Armitage would go on to direct the excellent Grosse Pointe Blank, which was always one of my favorite movies growing up. It should be noted for the average viewer that this film is definitely a hard “R” and would not be advisable to watch while the kids are awake due to the sexual content and violence in the film. It also has some great and unexpected laughs that are very rewarding. There is a real sweet undercurrent to the relationship between Junior and Susie that makes the film even more intriguing and unique.

With great performances, a faithful and bizarre screenplay, and well-paced direction, this film is well worth rediscovering if you are in the mood for something a little different and don’t mind a little bit of blood with your laughs.

Shout! Factory have done a really good job here. Miami Blues arrives on Blu-ray with a 1080p MPEG-4 AVC encoded image in 1.85:1 from a 2K scan as provided by MGM. While the film does show some specking and the film has some soft focus, it has enough visual flair to take advantage of the benefits of the Hugh definition transfer. There is a lot to enjoy in the film due to its colorful nature. Fans and first timers will be pleased.

The LPCM 2.0 track for Miami Blues sounds great. This track has pretty good depth of field for only using two channels. Thinks to the erratic nature of Junior’s actions, there is plenty of action that takes place. From the opening song of “Spirit in the Sky,” the film lets you know that it will be a fun track. The score by Gary Chang alternates between action to sentiment with a tongue firmly in cheek. It fits the film well.

Miami Blues deserves rediscovery. With three excellent performances, a wild and at times hilarious script, and energetic direction – it is a real winner. It is also a very R-rated film with a good amount of sex and violence. I am glad to own this one and will revisit it again soon. Kudos to Shout! Factory for releasing it onto Blu-ray. Highly recommended.