Memoirs of an Invisible Man (Blu-ray) 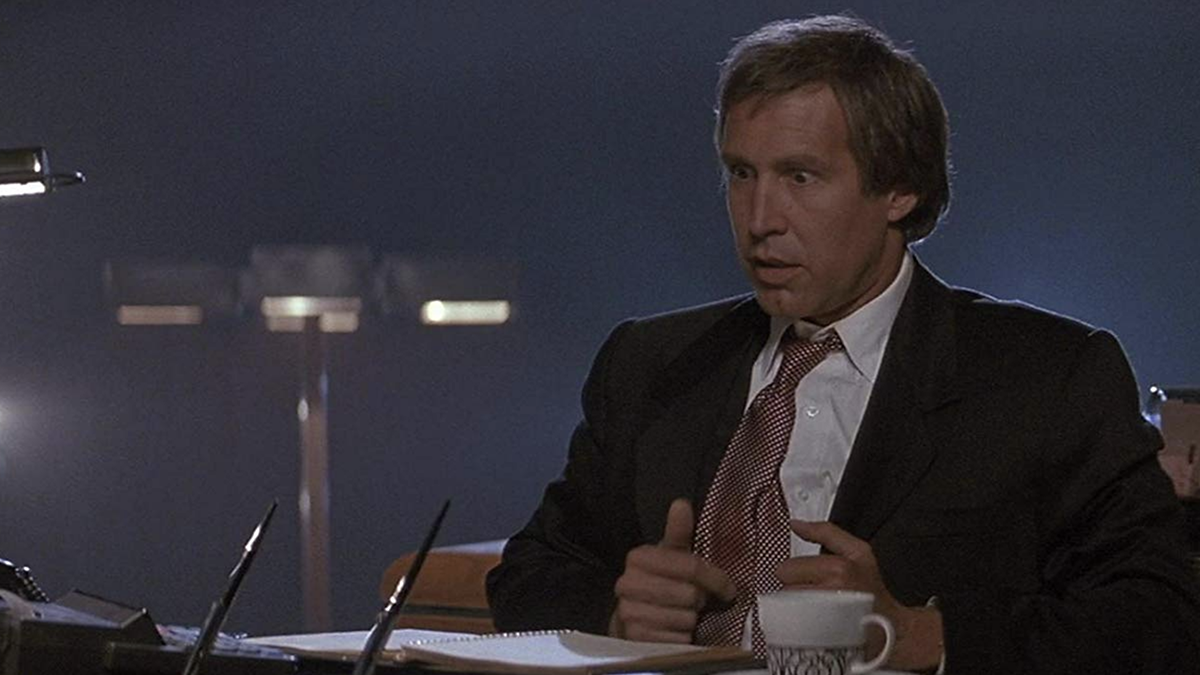 Chevy Chase plays Nick Halloway – a stock market executive that lives in San Fransisco. Nick is pretty cavalier and has not grown attached to anything. His yuppie friends are not very close with him. He treats his job with the bare minimum of effort. He is essentially a bullshit artist. One night, after skipping out early on work, he meets a girl named Alice Monroe (Daryl Hannah) through one of his yuppie friends, George Talbot (Michael McKean.) They hit it off and set a date for that Friday to meet at a restaurant. The next morning, hungover, Nick fills in for a business associate and goes to a presentation at Magnascopic Laboratories. Bored out of his mind he heads to find a restroom and inadvertently causes a massive accident unbeknownst to him. While he lays down i what he thinks is a sauna, the entire building is exposed to some form of invisibility blast. When Nick awakes he is invisible and so is his suit he is wearing along with most of the building. Outside the building, an evil CIA spook named David Jenkins (Sam Neill) is tasked with cleaning up the evidence. Realizing his life is in danger, Nick tries his best to disappear and evade the agents.

This film is very different from almost everything that Carpenter has directed and that Chevy Chase has starred in. For Carpenter, it is more lighthearted than anything he has made with the exception of Big Trouble in Little China. For Chevy Chase, this is the most dramatic role he took on (that I know of.) In short, both are playing against type with mixed results.

The plot itself is pretty interesting. Adapting to invisibility while being pursued by the CIA would be a challenge, and the film is imaginative in how it approaches the subject matter. I really enjoyed watching the character constantly dodging people to avoid collision due to their inability to see him. I also enjoyed the ebb and flow of the plot and how things come about. My guess is that the novel is excellent. It does not hurt the film that William Goldman helped with the script,

What does not quite work in the film is the love story. There is not much chemistry between Chevy Chase and Darryl Hannah when he is visible, but when he is invisible it seems pretty preposterous. These scenes needed some more work and made me feel vaguely embarrassed while I watched them.

The film has some incredibly imaginative scenes – my personal favorite is the scene in which the building that has partially turned invisible seems suspended in mid-air. That effect still holds up beautifully. The action scenes overall are very nice – with a few small missteps. Sam Neill is perfectly cast as the villain and I can understand why Carpenter made him the lead in In the Mouth of a Madness. He is really great. Unfortunately, the equipment that the bad guys wear to see heat trails and locate Nick makes them look pretty ridiculous. Chevy Chase does a pretty decent job with the material aside from his scenes with Daryl Hannah. Daryl Hannah is not given much to do here, but seemed to do the best she could with her material.

Overall, this is a movie that will probably not be at the top of anybody’s list. That said, it is a fun and imaginative movie that I enjoyed enough to recommend a rental. As a die-hard Carpenter fan, I am glad that Shout Factory has released it, but I don’t know how many people will want to add it to their collection.

This 2K transfer for this release looks pretty good, but it does not look incredible. While watching the film, and after seeing the supplements, it felt like Scream! Factory had not put a tremendous amount of effort into this release. If you were to compare this film transfer to the new transfer for The Thing, the difference would be night and day. That is not to say that the film looks bad, I just want to temper expectations. The film still has parts that look fantastic, but be prepared for some of the effects shots to have the a drop in focus attached to them. Overall, this is a good transfer but not a great one.

Scream! Factory have provided a a DTS-HD MA 2.0 track that sounds pretty good overall. I listened to this track and didn’t realize that it was only a stereo track while listening to it. I think that people will be pleasantly surprised by this track overall even if it is not as impressive as some of the 5.1 tracks that Shout Factory has done for other Carpenter releases. There were no noticeable drops in audio, although occasionally the film can go from soft-spoken to loud quickly. Good track overall.

Memoirs of an Invisible Man is a fun but ultimately forgettable John Carpenter film. This film has a lot of imaginative ideas, but the execution of the film is a little bit scatter-shot. Despite a great villain performance by Sam Neill, the lack of chemistry between the two leads distracts from the film. This release seems like it was almost an afterthought for Shout Factory with much less in terms of special features than usual and a very ordinary looking transfer of the video and audio. Fans will no doubt be glad to get the film on Blu-ray, but will need to temper their enthusiasm towards what they are actually receiving. I highly recommend a rental prior to a purchase, but as a real curiosity in Carpenter’s career (and in Chevy Chase’s career) I was glad to get to see it on Blu-ray.