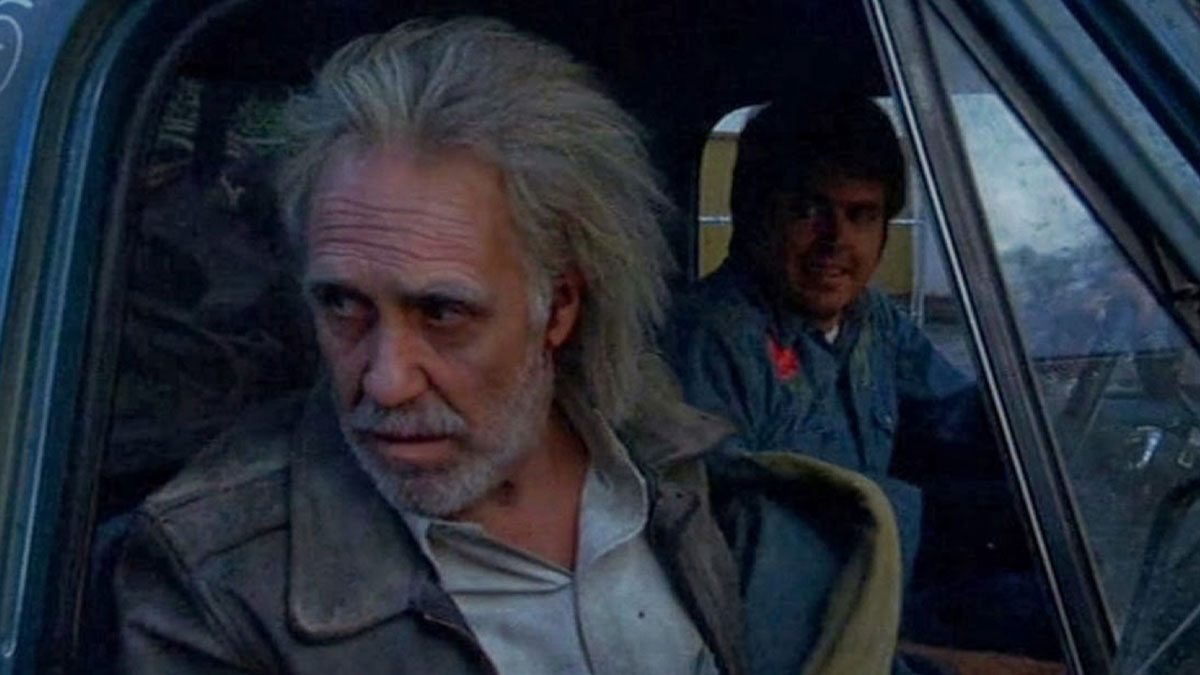 There are not many films that capture the American blue-collar spirit. In fact, if you were hard pressed to think of a few, what comes to mind? I think Harlan County, USA could work, but that’s a documentary. Norma Rae would qualify. Roger & Me, but once again that’s a documentary. Considering how much of our country is blue collar, the films we watch hardly focus on the American working man. When I received Twilight Time’s new release of Jonathan Demme’s film Melvin and Howard, I had no idea what to expect. Demme was a great director that had serious range. He directed Stop Making Sense, Philadelphia, Something Wild, The Silence of the Lambs, and Caged Heat, amongst many other films. Melvin and Howard is an amazing movie based on a “true” story of a very average American – Melvin Dummar.

In the desert outside Tonopah, Nevada, Melvin (Paul Le Mat) stops to pee on the side of the road, and finds an injured old man (Jason Robards.) He helps him into his car. The old man is headed to Vegas. Melvin has had hard luck and works in a magnesium plant. The old man lets Melvin know that he is Howard Hughes. Howard has a real aversion to music and Melvin has written a terrible Christmas song. They spend some time together on the road. Melvin drops off Howard in Vegas and makes his way back to his home where he lives with his wife (Mary Steenburgen) and kid. The next morning, his truck gets repossessed. His wife leaves him with his daughter. She shacks up until she gets thrown out. She sends the daughter back to Vegas on a bus. When Melvin goes to Reno with a friend, he finds his bride working in a strip club. When he serves her with divorce papers she moves to Anaheim, California. Their paths continue to cross over the years – occasionally falling back in love with one another. The film follows the trials and tribulations of Melvin’s life and love life until he finds himself listed as a beneficiary to part of Howard Hughes’ fortune in a disputed will.

The film specializes in showing a blue-collar side of American life rarely explored on film. Tiki parties, game show dreams, low-rent jobs, repo men – the film understands the lives of the working poor. Melvin buys things he can not afford, thinking himself “broke” instead of poor. The film understands that people are optimistic even when they are not captains of industry. The real spirit of America is in these people and seemingly impossible to break. Demme’s film manages to show that spirit in nearly every frame of the picture. The script by Bo Goldman won the Oscar that year for Best Screenplay Written Directly for Screen. It is a really unique and captivating story that deserves all the praise heaped upon it. By focusing his gaze on Melvin’s pipe dreams instead of just focusing on the Howard Hughes will and courtroom battle, the film becomes something very special.

The film features some great performances. Jason Robards is excellent in his small but crucial role. Paul Le Mat turns in a soulful and believable performance as the down on his luck and sunny Melvin. The film belongs to Mary Steenburgen who is so sweet and earnest in her role that she absolutely runs away with the film. She won the Oscar that year for Best Supporting Actress and it was well deserved.

One aspect of the film that is really enjoyable is that it is essentially a road movie. Even though the characters are not on a road trip, the film takes place in several different locales including the strip of Old Vegas – The Flamingo, The Dunes – Anaheim, California- small town Utah – and many other locations. Taking all these locations in through the lens of Demme with the help of his production designer Toby Rafelson is a joyful experience. Very few directors have the ability to make the quaint and cheap look sublime. It helps that cinematographer and long-term collaborator Tak Fujimoto was cinematographer on the film. He captures some striking imagery.

Universal Pictures have provided Twilight Time with a good looking transfer of the film in 1.85:1 aspect ratio with an MPEG-4 AVC encoded image. This film has some great looking cinematography courtesy of the excellent Tak Fujimoto. The transfer has good clarity and color reproduction. Fine detail is good although certain scenes are in soft focus. I did not see any signs of DNR and the print seems to be in pretty good shape. Fans should be happy overall.

Twilight Time have provided DTS-HD Mono track.  The film has a soundtrack with a few classic songs including “Satisfaction” by The Rolling Stones and “Fortunate Son” by Creedence Clearwater Revival which keeps the film lively. Dialogue is clear throughout and I did not notice any hiss or other audio related issues.

Melvin and Howard is a great film. It is moving and not the least bit contrived. I honestly can not recommend the film highly enough. The acting, especially Mary Steenburgen’s Oscar winning acting, is exceptional. The Oscar winning screenplay by Bo Goldman is very well written. Jonathan Demme does a tremendous job directing the film. You owe it to yourself to check this one out!