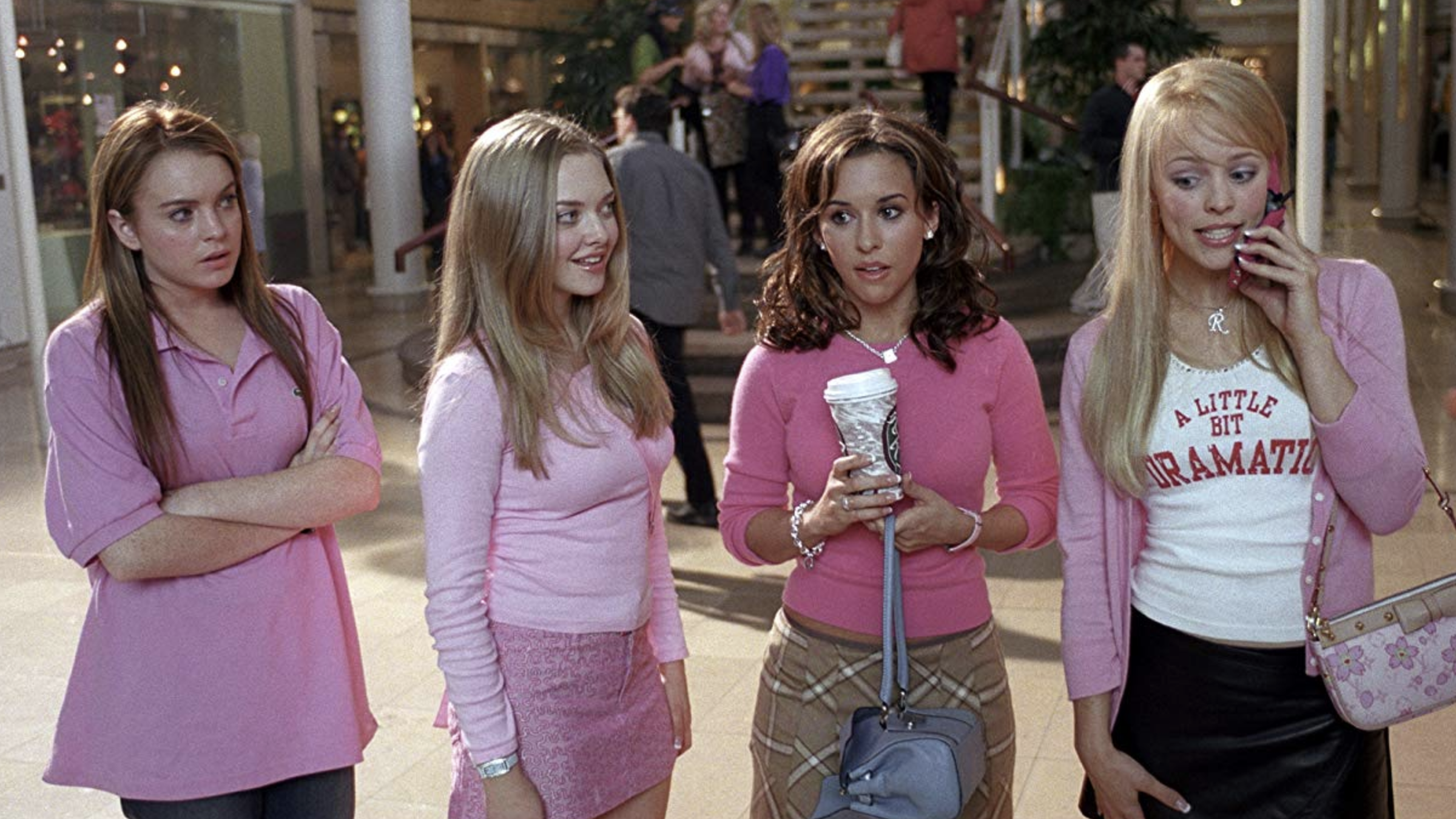 For its 15th anniversary, Paramount has released a new Blu-Ray disc of the 2004 film, Mean Girls. Well, new should be used lightly as this is the exact same disc from 2009, save for a spiffy new pink case. The film still holds up well today, and is actually better than I remember it being. I can’t help but think of how the film would be if it were made today when the world has changed quite a bit since 2004. I think we’re better for it that it was released when it was.

Let’s take a trip back to 2004, shall we? George Bush was in office, the economy was? Better and a bright young starlet by the name of Lindsay Lohan was literally on top of the world. My, what a difference five years makes. “Mean Girls” was written by Tina Fey who recently had the year of her life and represents the apex of Lohan’s storied career. That’s a strange thing to say about a 22 year-old, for sure, but we’ll get into that later. If anyone has seen the cult classic “Heathers”, then “Mean Girls” is a lighter version of that. The movie was produced by Lorne Michaels and though not a SNL movie per se, it does have stars Ana Gasteyer, Amy Poehler, Tim Meadows and Tina Fey (at the time, all SNL cast members save for Meadows). As for the supporting cast, well they’ve ended up a bit better off than Lohan. Rachel McAdams went onto Wedding Crashers and The Notebook while Amada Seyfried headlined last summer’s Mamma Mia! What is it about Mean Girls that makes it so fetch?

Cady (Lindsay Lohan) has just moved back to Chicago after growing up in Africa. She’s literally the new kid on the block and wants more than anything to fit in. On her first day of school, she’s isolated and alienated but finds a few friends in Janice (Lizzy Caplan) and Damien (Daniel Franzese). It’s not long before the “plastics”, a group of popular cliquish girls, invite Cady to become one of their own. Cady, desperate for acceptance, accepts but sees that the trio aren’t really that nice. In an attempt of loyalty to Damien and Janice, Cady tries to sabotage the plastics from the inside but all the while finds herself becoming more and more like them. Add to this that Cady has thing for Senior Aaron (Jonathan Bennett), but learns that he’s off-limits because he and Regina (Rachel McAdams) had gone out the year prior. Will Cady get her revenge or end up just as bad as those who she sought to sabotage?

It’s rather sad, really, when you think of how much Lindsay Lohan had going for her. But if Hollywood’s taught us one thing it’s that stars rise from the ashes like a phoenix (take Robert Downey Jr., for example). Mean Girls represented the last of Lohan’s good movies that began back in the late 90’s with The Parent Trap. She then had a string of successes with The Parent Trap and Confessions of a Teenage Drama Queen and even modest success with 2006’s Herbie Fully Loaded but ever since then it’s been a steep decline. Ultimately Mean Girls isn’t that bad of a movie. I kind of chuckled as I was watching it and it does have some fairly funny moments. Fans of Tina Fey might enjoy her small part, but the real allure is all Lohan. Undoubtedly this film will find its place among the other films of this genre like Clueless and Heathers. Recommended.

While the transfer is solid for sure, one can’t help but wish a new remaster was done or even a 4K disc. This is the same disc and certainly some fresh paint, so to speak, would’ve been nice for a film like this, but that wasn’t meant to be. Still, this image is nothing to shake a stick out as colors are sharp and details strong throughout. We get an AVC encoded 1.85:1 ratio that works well overall.

The Dolby TrueHD track is pretty straightforward as it was on the previously-released Blu-ray. It works for this sort of film and that’s pretty much what there is to it. We hear background banter in the school halls and cafeteria and what have you. Vocals are clean sounding with no obvious flaws noted.

For its “decade and a half” anniversary nothing new has been included. The supplements are the same as the previously-released Blu-ray.

Mean Girls holds up very well after 15 years and comes recommended. Unfortunately, this disc offers nothing new, outside of a pink case. We don’t even get a slipcover or digital copy code, which easily could’ve been provided. Some new features like a retrospective or a remaster of the transfer would’ve been nice, but that wasn’t meant to be. If you already own this, there’s absolutely no reason to get this. If you don’t, then this is currently cheaper than the first run Blu-Ray, so have at it. Some will either despise the pink case or find it appropriate for the film itself.