What happened to the young adult movies? It would seem that after some of the “big guns” ran their course, most notably Harry Potter, The Hunger Games and Twilight, there was a new crop of films poised to take their place. And then, well…nothing. I mean, something, but with franchises ripe for the picking like Divergent, Maze Runner and The 5th Wave, the interest just seemed to fizzle out. Regarding Divergent, I’d need to do some fact-checking, but what I’d read was that the final installment was set to be a television movie and the cast said “Uh no, we’re movie stars. No thanks.” So that one might not ever see the light of day. With Maze Runner, we do have the final installment (obviously), though it too was delayed. And with The 5th Wave, I suppose the less said about that one – the better. Still, the young adult genre has been a staple of films for quite some time and I’m sure it won’t be long that we’ll have a new slew of films. Until then, let’s wrap this one up.

We pick up where the last one left off, after the betrayal of Teresa (Kaya Scodelario), who joined WCKD (pronounced, if you don’t know by now, “Wicked”) as they were trying to find a cure for the “Flare” disease. It’s been wiping out the human population and turning them into zombies. While the rest of the “Maze Runner” gang manages to pull off some ever-so-daring rescues of would-be Maze-Runners, Teresa is hell-bent on finding a cure and works in concert with Ava Paige (Patricia Clarkson). The “rat in the maze” so to speak is Minho (Ki Hong Lee), so Thomas (Dylan O’Brien) and company must pull off a daring rescue to save him and, presumably, the world.

There’s a lot going on in this film and feels as if there was too much jam-packed into it. As much as I’m not a fan of the prolonged two movie finales (Twilight, Harry Potter) it might have been a good thing here. Then again, I know that these films weren’t the cash cows that Fox thought they would be, so I doubt that was ever considered. It felt that it was climax after climax and it just grew a bit old. For point of reference, I cite The Lord of the Rings: Return of the King. If ever there was a grandaddy of them all for endings, it had to be that one. It’s nice to see that this franchise ended up the way it did, though there are still some more Maze Runner books out there. That said, Dylan O’Brien will be in his 30’s if he continues to play this role and I just don’t see that happening. I’m all over the place. You should know what to expect when watching this film, it’s satisfying for sure and a good way to end the series.

There’s a lot of CGI going on in the Maze Runner films, but that’s ok because it gives them a very unique look and feel. There are certain movies that are made for the 4K format and others that have had me scratching my head asking “why?” This is one of the former. Everything about this just screams “this must be seen in 4K!” and so it was. The 2.39:1 HEVC 4K image is nothing short of perfection. The sweeping visuals, tack sharp image, HDR color scheme – it all just…works. Honestly, I could go on and on, but suffice it to say that with this one you know what you’re getting. And what you get looks perfect.

Fox has been hit and miss on some of their 4K offerings when it comes to the audio. Some have an upgraded Dolby Atmos mix and others don’t. Again, this is one of the former and the Atmos mix does have a few advantages over its DTS HD Master Audio counterpart (found on the Blu-ray). There’s an extra depth and/or dimension there that I can’t really put my finger on. Vocals, surround sounds, atmospheric sounds and everything in between just sound flat out amazing. It’s a track that not only adds some intensity to the film, but makes it more of an experience as well. A fine effort.

With the exception of the audio commentary, all of the supplements are found on the Blu-ray.

Maze Runner: The Death Cure sees yet another young adult trilogy come to a close. I’m sure there’ll be more, but this one just kind of got lost in the shuffle. The novels are certainly worth reading and it’s not that the films are bad, they just started out good and, well, lost some steam. Fox’s Ultra HD both looks and sounds outstanding and the supplements contained are worth a watch, for sure. 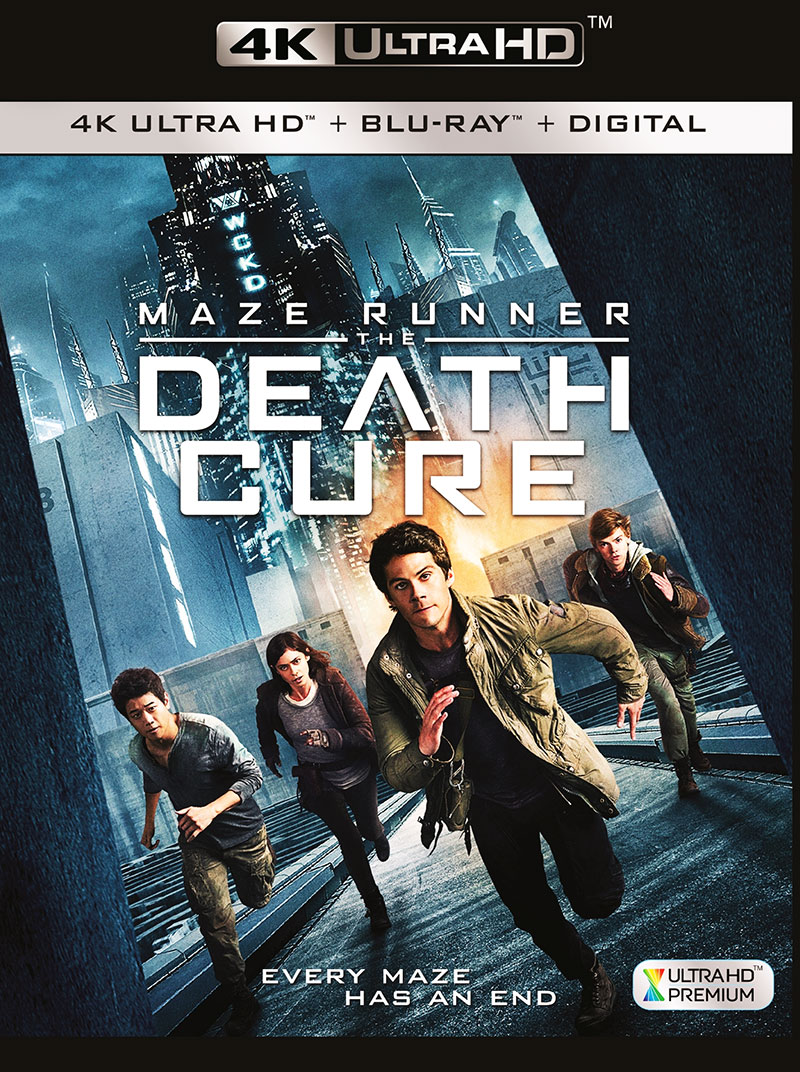