I have been a fan of Bob Dylan for almost as long as I can remember. It all started with a blind purchase for one dollar for a CD copy of Bob Dylan’s Greatest Hits, Volume 1. I had heard of Dylan but had not really listened to him until I purchased that album. I don’t think it would be hyperbole to say that listening to that album changed my life. I remember the thoughts that coursed through my head clearly about twenty-three years later. The main realization I had was that your voice did not need to be traditionally beautiful to please a fan base. You did not need to be Jimi Hendrix for the guitar to have a pleasing tone. You could blow them all away with your lyrics and your vision. It is fair to say that I may never have understood the pleasure of performers ranging from Neil Young to Destroyer without first embracing the sound of Bob Dylan. Over the years I have listened to almost all of his albums and many of them many many times. My favorite era is around the Rolling Thunder Revue when he played with the Band, but that is just my personal preference. I believe his Royal Albert Hall concert to be one of the greatest live performances of all time. I have been fortunate enough to have seen him three times in concert. I have read his incredible (and incredibly mysterious) autobiography Chronicles: Volume 1 from the first page to the last. So why am I telling you all of this? Because a Dylan fan knows a Dylan fan from someone who just doesn’t get it, and I wanted to make sure the readers knew I had the street cred to tackle reviewing a film starring and co-written by Bob Dylan.

In 2003, Bob Dylan starred in Masked and Anonymous which was directed and co-written by Larry Charles. Larry Charles is most famous for his work on Curb Your Enthusiasm, Seinfeld, and the film Borat. Originally the film was pitched as a slapstick television show starring Dylan to HBO, but then Dylan decided to retool the script again. The resulting film is as mysterious and strange as any career choice that Bob Dylan ever made.

In a surreal third world version of America, Uncle Sweetheart (John Goodman) needs to throw together a benefit concert. Uncle Sweetheart owes a form of debt and must hold the benefit if he plans to pay it off. He tries to reach out to celebrities but the only celebrity he feels he can book is Jack Fate (Bob Dylan.) Jack has been in some form of a political prison, but he is released to help with the benefit. His father is an aging dictator that seems to be on the precipice of death. They had a falling out over a woman (Angela Bassett.) As the event begins to take shape, the President in waiting (Mickey Rourke) prepares to jockey into position and seize power. Meanwhile, a desperate journalist (Jeff Bridges) attempts to find a way to interview and potentially disgrace Jack Fate. Along this journey, Jack Fate encounters cameos from actors in smaller roles including Cheech Marin, Val Kilmer, Jessica Lange, Giovanni Ribisi, Luke Wilson, and Penelope Cruz.

This was a difficult film to review. As a Dylan fan, I was happy to see it. As a movie lover, the film is a disjointed mess and largely incomprehensible. It makes the proposition a difficult one. The big question you should ask yourself is – how big of a Dylan fan are you? For myself, there was no way that curiosity would keep me away from a film that Dylan wrote and starred in. The resulting film has moments that are awesome including some great footage of Dylan playing with members of his exceptional live band. The film also has some dumbfounding moments that just made me scratch my head. There is no doubt that the film will share an equal number of detractors as promoters, but the promoters will mostly be made up of die hard Dylan fans. Make your judgement on whether it is worth your time accordingly. I was happy to see it on Blu-ray.

Shout!Factory presents Masked and Anonymous in a great looking AVC-encoded image in 1.85:1 aspect ratio. Sony provided the transfer and their quality control is some of the very best in the business. The film is largely shot using the digital camera work of the time, but Sony has made that digital film look great. I was trying to figure out what Sony did to make the imagery more vivid, but it is a good upgrade over the 2003 DVD.

The audio presentation on Masked and Anonymous sounds great. The film features a well done DTS-HD MA 5.1 track that preserves the original sound design well. The music that Dylan plays in the film sounds very full and benefits from the strong lossless track. The film does occasionally suffer from the soft-loud issue where conversations are not very loud and then the music is substantially louder. This is a minor complaint but something I noticed while viewing the film.

Masked and Anonymous is as perplexing as any of Dylan’s most enigmatic lines, but it is not as interesting as some of his best work. There are moments where you can really see Dylan in the writing, but the film has trouble delivering a cohesive narrative. The video and audio transfer provided by Sony to Shout!Factory is unsurprisingly pristine. The interview with director Larry Charles is fantastic and sheds a ton of light on how the project came together and reveals some of the moments where Dylan was really drawing on his own life. Overall, for fans of the film this will be a much-deserved upgrade from the old DVD copy. For newcomers, a rental is recommended so that they can make sure the film appeals to them. For Dylan archivists, this is a hard proposition to pass up. 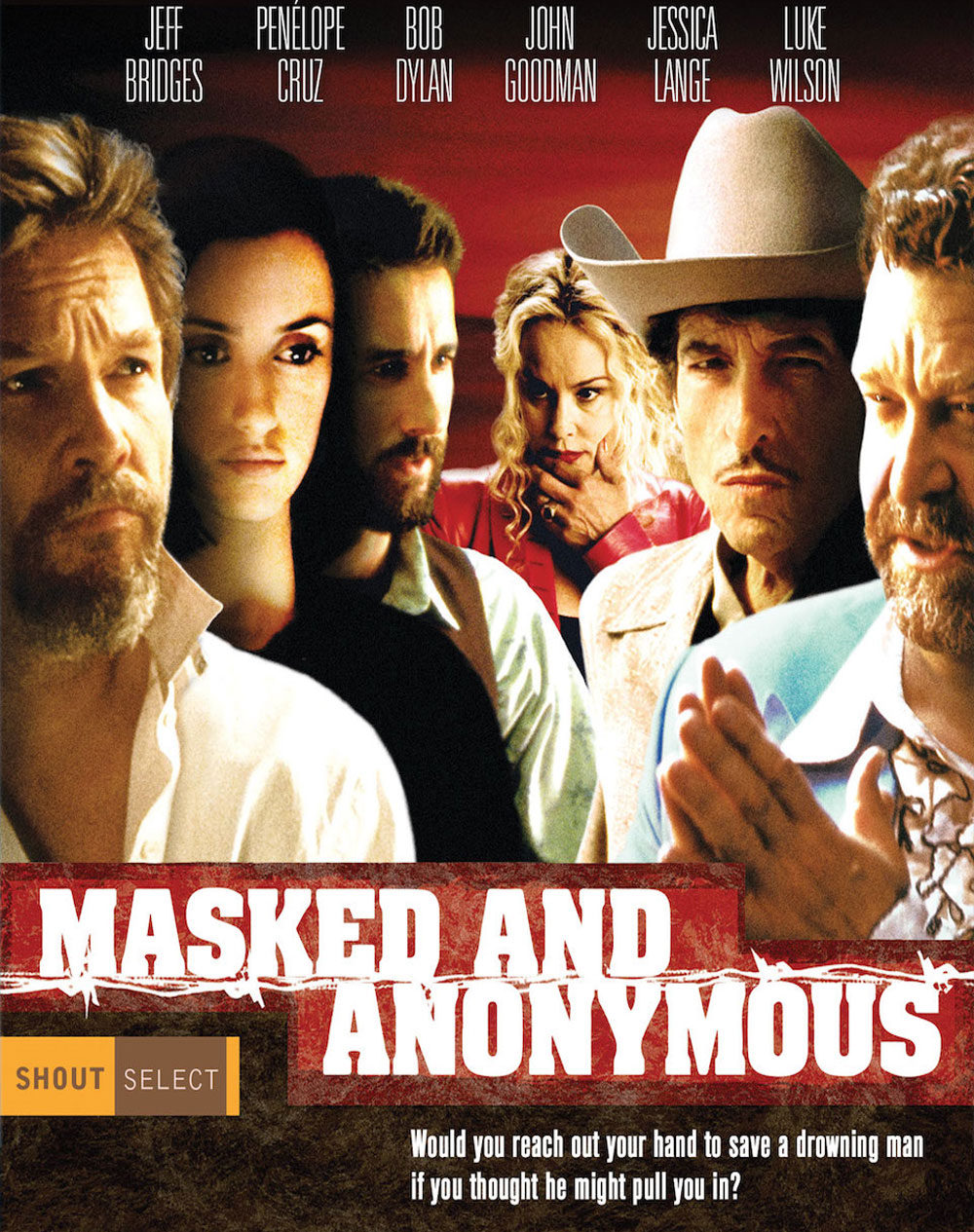