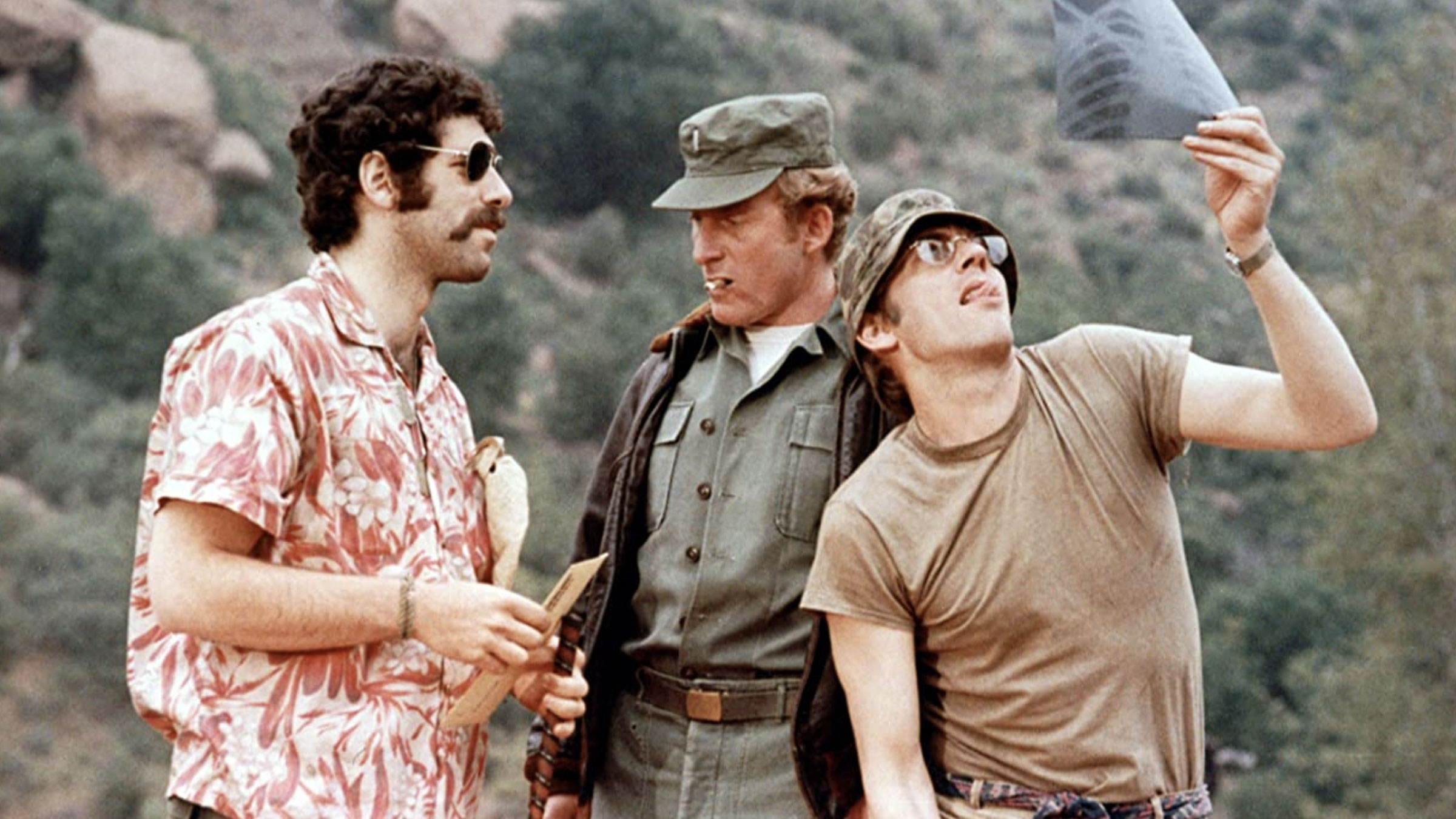 Some 40 years ago a relatively unknown director by the name of Robert Altman was given the chance to direct a film by the name of M*A*S*H. The screenplay had been written by one of the infamous “Hollywood 10”, Ring Lardner Jr. (who went on to win an Oscar for his screenplay). Altman was not the studio’s first choice for the movie, he was actually the 13th. The cast was relatively unknown and the book by Richard Hooker wasn’t one that everyone had read. Featuring then unknown actors by the names of Elliot Gould, Tom Skerritt and Donald Sutherland, M*A*S*H came out at a time when the United States was in the dead center of the Vietnam war. And if you didn’t know better, you’d think that this was a movie about the Vietnam War. It isn’t. M*A*S*H is actually about the Korean War and Altman tried to erase every reference to Korea that he could. In fact, it only says so once in the movie. And the movie is actually an anti-war movie. So the question was, why was it so popular? During a time when America was at “war” in Vietnam, soldiers were actually going AWOL (absent without leave) to go and see the movie. The depiction of violence and humor was something that the public had not been exposed to and evidently, the public liked what it saw. M*A*S*H is actually better-known for the television series that it inspired, running 11 years and garnering some 99 Emmy nominations, it was one of the most acclaimed and popular series of all time.

Altman is the first to admit that the plot of the movie is very non-linear. There is no antagonist at all and in fact, it can better be described as “The Adventures of the 4077th“. We meet the major characters of Hawkeye Pierce (Donald Sutherland) and ‘Duke’ Forrest (Tom Skerritt) who have just been assigned to the 4077 M*A*S*H. As surgeons, they were drafted to serve their country and in their off time, they drink plenty of martinis to laugh and pass the time away. With the religious Major Burns as their roommate (Robert Duvall), it’s quite clear that the 4077 are in for a rude awakening. Things don’t get any easier when ‘Trapper’ John McIntyre (Elliot Gould) shows up. As another surgeon, he’s the third part of the trio that starts to run the camp (in a good way). And I might add, Gould sports one of the best handlebar mustaches that I have ever seen! When “Hotlips” O’Houlihan (Sally Kellerman) arrives, it gives the gang just the inspiration they need. Hotlips is the new chief nurse and is therefore a perfect target to be the brunt of everyone’s jokes. This sets up one of the movie’s most famous scenes as the shower curtain is pulled off while a group of onlookers applaud. Again, there is really not a plot to speak of. Trapper John and Hawkeye travel to Japan, setting up a few good scenes and the film’s climax is he football game with another Army unit. (Naturally, as we all know, the war eventually ends).

While M*A*S*H isn’t one of those movies that will leave your jaw on the floor, it’s just good clean (dirty) fun. The film was nominated for 5 Academy Awards including Best Picture, and it won for Best Adapted Screenplay. Though as we learn from the featurettes, about 80% of the film was ad-libbed. The only member of the movie that went on to the television series was Radar (Gary Burghoff), but as time has proved…the show was a success without any of the other film’s stars. Altman, as we all know, went on to create several other fantastic movies, notably “McCabe and Mrs. Miller, Nashville, The Player and Short Cuts” to name but a few. I don’t really know what else to say except that this is a movie that must be seen! The humor has withstood the test of time and it’s as funny now as it was then (except that it was released three years before I was born). A great cast and an excellent Two Disc set make this one a keeper.

“M*A*S*H” has a very unique palette used for the movie which is extremely muted, to recreate the Korean War. Greens abound throughout and essentially come alive at the end football game. The 2.35:1 AVC HD transfer does sharpen the image up a bit from the standard DVD, which is good news. Fox is rather hit and miss with some of their catalog titles, but they did give this title the attention it deserved. The flesh tones do appear to look consistent throughout the movie and in some scenes, the level of detail is very good (unfortunately those are few and far between). When you take into account the film’s age, budget and the amount of restoration that went into it, it’s not the best transfer out there but it’s an improvement over the previous standard DVD!

For what it’s worth, there is a DTS HD Master Audio track, but let’s be honest ? this is “M*A*S*H” we’re talking about here. It won’t sound that great so matter what sort of audio track you put on it. Consider the fact that this was a low-budget movie made 40 years ago and maybe you’ll realize that the sound isn’t that bad. While a few scenes tend to have a bit of a hiss to them, the film doesn’t suffer that much. Altman’s trademark overlapping dialogue is quite a treat to listen to (you’ll know what I’m talking about when you see the movie), but can be a bit confusing at times. Surround effects are essentially non-existent. To say that this is a dialogue-driven movie is an understatement. So while the sound isn’t up to par, it’s really not as bad as it sounds (pardon the pun). The title song, “Suicide is Painless” sounds very good and if you didn’t know better, you’d think you were watching the television show. Altman’s son, Mike, wrote the lyrics for the title song. Also included is the original mono track as well as a Dolby Digital 5.1 track in Spanish and a French mono track.

Most of the supplements from the two-dics DVD have made it to this Blu-ray . New to this Blu-ray version is “The Complete Interactive Guide to ?M*A*S*H” in which when turned on, you get a little icon as to who’s drinking what and hooking up with who. It’s essentially designed to help you keep track of the myriad of characters and what they’re up to during the movie. If I didn’t know better, I’d say this would be an excellent drinking game. Next up is “Backstory”, a 25-minute feature that was actually an AMC (American Movie Classics) production and you can tell it was made for TV. But its presence is welcome here. As we learn by watching the other included featurettes and documentaries, a lot of the information is repeated, but this has a better look and feel to it. Telling the tale of how the movie came to be through the book and eventually wound up in the hands of Robert Altman. New interviews with the stars of the movie are shown and it’s a very good look at the film and how it was made. The commentary track with Altman isn’t quite as bright a spot as I had hoped. This is a solo commentary and as such, there are some rather long pauses in the track as he is really admiring his own work. I can’t say as I blame him. A majority of the information has been included on the other supplements (he was the 13th director the offered the movie to, etc.) so there’s not a whole lot of extra information here, but it’s better to have a track than not too! Since Mr. Altman is no longer with us, this track stands as a testament to his work. There is also a gallery of 44 still images from the movie, I’ve never really been a big fan of these, but I did give them a quick look through. Interesting, to say the least and it’s another not necessary feature, but a nice touch. Lastly, the trailer is presented in a 1.85:1 HD image and stereo sound.

Next, we move onto some more featurettes. The first is Enlisted: The Story of M*A*S*H, it essentially follows the story and how it ended up being made. Interviews with the stars (new interviews) are shown and we learn of the hard time it took to get the movie made and seen the way it was. We see how Altman had to go toe to toe with the executives of Fox and how stars Elliot Gould and Donald Sutherland wanted to originally get him fired because they thought he was crazy! Next up is M*A*S*H Reunion which has interviews with the stars at the showing of a 30th anniversary showing of the movie, complete with restored print and all.