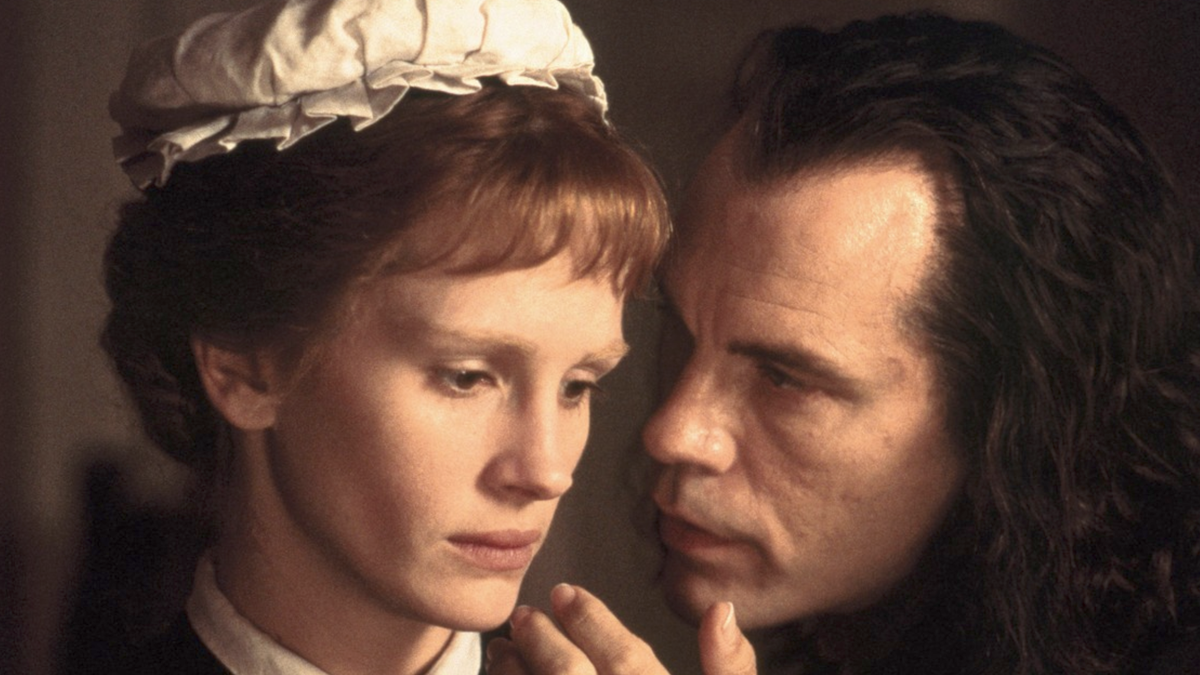 Plagued by rumored on-set problems and other issues, Mary Reilly had a lot riding against it prior to its theatrical release back in 1996. At the end of the day, the film is definitely something of a mixed bag led by a wrongfully cast Julia Roberts. The film has its share of problems, so I find it unfair to pin it on just her, but she certainly doesn’t help matters here.  It’s the story of a housemaid (played by Roberts) and Dr. Jekyll (played by John Malkovich) and his transformation into Mr. Hyde. This basic story will be more than a little familiar to most viewers, but this at least offers a unique take on it. The fact that the end result is less than satisfactory is all the more frustrating, but at least they tried. I suppose we can give credit for that. I think the two biggest problems here are the casting and that the film never really decides what kind of film it wants to be. So we’re left with a sort of mess of a film that only occasionally comes to life.

Roberts plays the title character, Mary Reilly and is a somewhat reserved and shy housemaid. All is routine until one day her employer, Dr. Jekyll seems to take an interest in her. Reilly has scars all on her body, and Jekyll tries hard to get her to open up about her past. Eventually, she does open up about them, and we’re given the knowledge that the scars are at the hand of her abusive father. As the two grow closer, Mary soon learns secrets about Dr. Jekyll as well and what his plans are. Don’t expect a lot of tension as the film offers up more of a character study than a standard thriller. There are some suspenseful moments, but they’re built around the more dramatic stuff. I think one’s appreciation of the film will depend on how much you find yourself caring about the two main characters.

I’ll admit that the film kept me with it for a while, but before long, I just grew tired of the characters and where the film would eventually take them. I’m usually a fan of Roberts, but she really is out of place here. She often seems bored and as if the film is beneath her efforts. I appreciate the attention here to character development, but the film does become a bit too boring for my liking. It simply couldn’t sustain my interest the whole way through. All things considered, the film has moments that work, but the whole proves less than satisfying.

We get a less than stellar transfer to a film that isn’t exactly easy on the eyes to begin with. I suppose they at least made an effort, but colors come across as rather bland and not very appealing. There’s a bit of debris and other artifacts seen here, especially in the earlier scenes. Details are never as sharp as they could be either. The image is AVC encoded with a 1.78:1 ratio.

Don’t expect too much from the 2.0 track here. It’s serviceable and gets the job done, but that’s about it. Vocals are clear enough and I never had an issue with hearing the dialogue. It is a bit limited since it’s only 2.0, but it works enough that I can’t find it terrible.

This disc contains no bonus material.

Mary Reilly is definitely a mixed bag, but if pressed, I’d say skip it. There are some moments that show promise, but the performances are questionable and the film can be a bit too boring for its own good. This disc does the film little favors as well as the specs are only passable and there are no supplements.