Manchester by the Sea (Blu-ray)

f you’re like me then you probably find most of the highly praised films to often be overrated. Manchester by the Sea is one of the rare films that actually lives up to all the praise. It tells a simple and honest story that doesn’t have an inauthentic moment. It also features strong performances across the board, especially from Casey Affleck in the lead. It’s a well-paced film that won’t be soon forgotten. It’s great to see a film of this sort filled in a time of countless remakes and superhero flicks. This one is in a league of its own and is well worth watching.

Lee Chandler (Casey Affleck) just receives news that his brother Joe (Kyle Chandler) has suddenly passed away. Lee is to be the guardian of his nephew, Patrick (Lucas Hedges). It’s clear at first that Lee isn’t up to the challenge, and is a bit surprised by the proposed arrangement. Although we’re told early on that his brother has died, we actually get many scenes featuring Kyle Chandler via flashbacks. We also learn as the film progresses why Lee doesn’t want to relocate to where Patrick lives and be the guardian. There are many plot revelations that I won’t reveal as they’d lead to spoilers, but the less one knows going in, the better. Manchester is indeed a sad film filled with many tragic moments, but there are also several amusing scenes as well. It’s very much like real life where we’re faced with moments of laughter and sadness, sometimes within moments of the other. As Lee tries to make funeral arrangements and sort all the details out, he’s also faced with looking after Patrick for the time being and driving him around. We learn that Patrick doesn’t want to leave Manchester and tries to convince Lee to just relocate there. Patrick is very much set in his routine since he’s the member of a band, takes care of the boat owned by his late father and has two girlfriends. As we’re first introduced to Lee, we see him as somewhat reserved and not very social. He’s a janitor in Boston, but throughout the film we learn more and more about his behavior and his reasons for not wanting to make changes in his life. It’s all very powerful stuff and will likely take many viewers by surprise in some of the revelations. Michelle Williams also does good work here in several flashback scenes as Lee’s former wife, Randi. I enjoyed some of the asides such as when Lee and Patrick argue about keeping his father in a freezer since the ground is frozen and they can’t bury him right away. There are several more amusing moments throughout the film. It all rings true and never feels forced or melodramatic. To put simply: It’s just a great film.

One of the great things about films set in Massachusetts is that it’s almost like a character in and of itself. The film is very visually pleasing. The transfer remained strong throughout with no issues to speak of. Details were strong and colors nice and accurate. I found the rather bland color palette actually a benefit as it more accurately reflects the tone of the film. It’s a great-looking transfer and the image is AVC encoded in a 1.85:1 aspect ratio.

The DTS HD track is solid, but it should be noted that this film is dialogue heavy and most of it is front loaded. There are moments where we see characters playing in a band and scenes on a boat that kick things up, but the dialogue is front and center. Vocals were fine and caused no serious issue. There were moments where background noise kicked in and added to the atmosphere as well. The track compliments the film well.

Manchester by the Sea is easily one of the best films of 2016. It simply rings true, is nicely paced, well-acted and tells a simple yet good story. It stays with you long after it has ended as well. I really can’t find anything negative to say about it. Highly recommended. 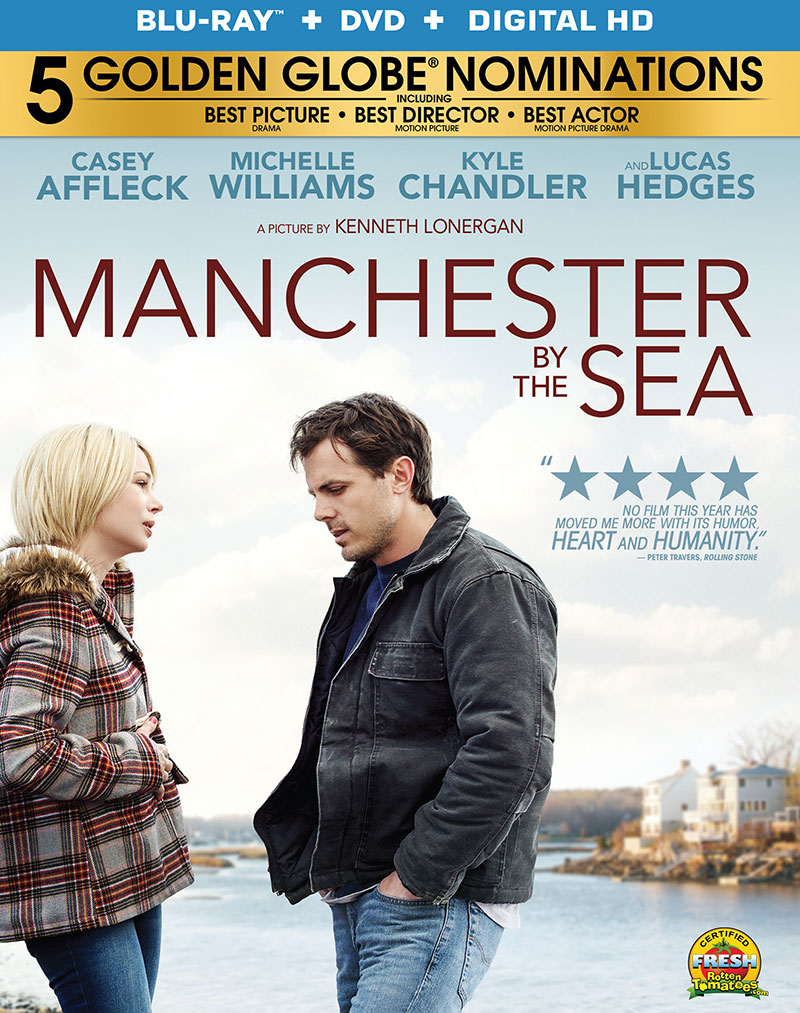