The Man with Two Brains (Blu-ray)

I grew up watching Steve Martin films on a weekly or bi-weekly basis. Our family loved The Jerk, ¡Three Amigos!, and Dirty Rotten Scoundrels more than any other comedies that I can recall from my adolescence. Our family still routinely brings up these films in conversation pretty much every day. Therefore, I was excited to see that Warner Archive collection was bringing a couple of Steve Martin’s more unheralded efforts to Blu-Ray: My Blue Heaven and The Man with Two Brains. I had not seen The Man with Two Brains since I was about sixteen years old, and to be honest I had not been a big fan of the film back then. Now that I am thirty-two years old, it was a good time to revisit the film to see if I had missed something.

The Man with Two Brains revolves around Dr. Michael Hfuhruhurr (Steve Martin,) the greatest brain surgeon in the world. While giving an interview and driving a car, Michael accidentally strikes Dolores Benedict (Kathleen Turner.) Michael performs brain surgery using his new screw-top method and successfully saves her life. He also begins to fall in love with her. What Michael does not know is that Dolores is a man-eater who rejoices in torturing her lovers. As their marriage hits the rocks, Michael begins to experiment with living brains that have been extracted from their human hosts.

I went into the film with only a memory of thinking it was decent when I was younger. I can’t tell if it is just the fact that I have grown older, or if the film has just aged really well, but I thought the movies was hilarious this time. This has Steve Martin partnering with Carl Reiner like they did in the films The Jerk and Dead Men Don’t Wear Plaid. While this film is not quite as funny as The Jerk, it still finds Steve Martin in one of his most over-the-top roles. Martin is hilarious throughout the entire film as the narcissistic brain surgeon. Kathleen Turner sinks her teeth into the role of Dolores Benedict and does a solid job with the material. The film is not by any means perfect. It has numerous jokes that don’t land. It is also much cruder than most of Steve Martin’s offerings, so some will find it to be a little bit too much. That said, I found myself laughing from early in the film through the very end. I should also point out that the first thirty minutes are probably the funniest in the film, but I won’t hold that against it.

Overall, I am glad that I returned to The Man with Two Brains. It was, duh funnier than I remembered and I have been laughing to myself today just thinking about it. If you have not seen it, adjust your expectations and I think you will get a good laugh out of it.

Warner Archive have provided a brand new 1080p HD transfer that was remastered specifically for this release in 2017 using an MPEG-4 AVC encode. The film was shot in 1.85:1 but is presented in 1.78:1. I am not sure exactly why this aspect ratio was chosen over its original ratio, but this is not a deal breaker to me. This transfer is well-done, but similar to most movies from the Eighties, it is not exactly the most gorgeous film in the world. If you adjust your expectations to fit the original look of the film, the transfer itself does a very capable job of presenting the film how it originally looked. Good stuff.

Warner has provided a very capable DTS-HD Master Audio 2.0 track of the original mono mix. Even though this is a mono track, it is very busy with sound effects and the ridiculous score by Joel Goldsmith. This score is one of the things that both sets the film apart but also dates the film. It is so aggressively goofy that I could see it turning people away from some of the antics in the screen. Love it or hate it, this audio track very capably replicates the original sound design.

The Man with Two Brains finds Carl Reiner and Steve Martin operating at their most ridiculous. I found the film very funny and was glad to revisit it. If you have not seen it in a while, you may find that it is much funnier than you remember. Warner have provided cable transfers of the film and audio, but some will be curious as to why there are no special features. For fans, I would recommend retiring the old DVD. For newcomers, I recommend checking this one out. 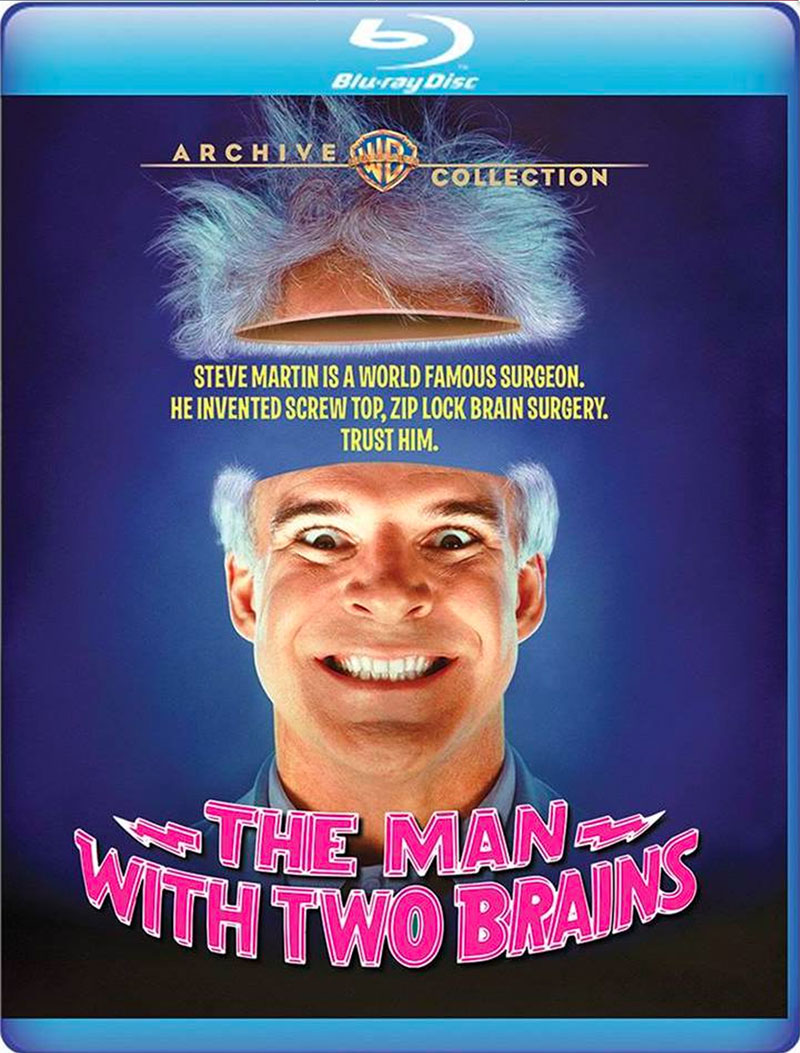