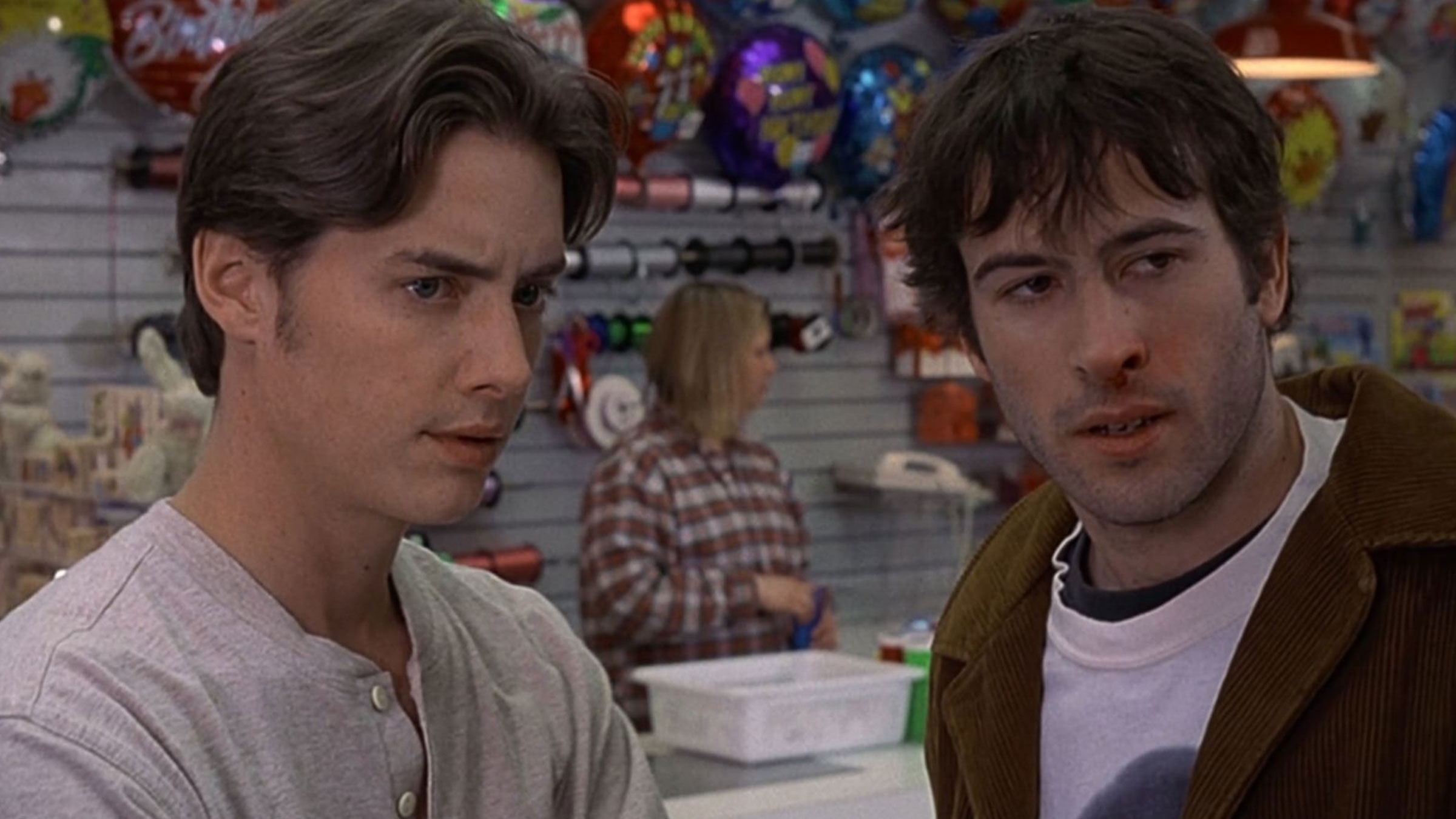 The story of Kevin Smith is nothing short of amazing. A comic book guy who had a passion for films decided he wanted to be a filmmaker. He sells his comic book collection, maxes out his credit cards and comes up with a little movie called Clerks. The rest, of course, is history. The 90’s were the decade of independent film and no one epitomized it more than Smith (well, maybe Tarantino). And with the success of Clerks came the inevitable sophomore film. It was called Mallrats. Admittedly, it didn’t meet with a lot of critical or commercial success. There’s a feature in the supplements where Smith tells of the the weekend box office and it was, well, less than anticipated.  But that’s been a quarter of a century ago and Smith has more than made up for this film. And speaking of the movie, it’s gained a lot of notoriety in the last decade. It’s now considered a “cult classic.” Let’s go to the mall.

Simultaneously dumped by their girlfriends, comic book obsessive Brodie (Jason Lee) and best friend T.S. (Jeremy London) plan to ease the pain of their losses by taking take a trip to the local mall. Amongst shoppers, they discover the mall is being used as the venue for a dating show, in which T.S.’s girlfriend Brandi (Claire Forlani) is the star. Hatching a plan to win back their significant others, Brodie and T.S. enlist the help of professional delinquents Jay (Jason Mewes) and Silent Bob (Kevin Smith) to hijack the game show in a bid to win back Brandi. Meanwhile, Brodie carries out his own mission to make good his relationship with Rene (Shannen Doherty), who has attracted the attentions of his nemesis Shannon (Ben Affleck).

And that’s it. There are some foul-mouthed moments that all fans of Smith can appreciate and as the ever-expanding View Askew Universe grew, this movie had a solid part in it. The film is notable for a few reasons…first and foremost, it gave us an early look at a young actor who we’ve all seen time and again – Ben Affleck. Affleck had some smaller roles a few years earlier in Dazed and Confused and School Ties, but it was this film that led to Smith’s next work – Chasing Amy. That gave him his big break and the rest is, well, history. At the time the big star was Shannen Doherty who was in her prime on television’s Beverly Hills 90210 (the original). Other faces in the crowd were Michael Rooker, Ethan Suplee and the one and only Stan Lee made a cameo. Bear in mind this was 15 years before the MCU was even thought of. At this point, you’ve either seen this film dozens of times or you haven’t seen it at all. Take a look, the disc is not to be missed.

I’ve seen this movie on just about every format imaginable (well, except beta). I purchased the VHS copy when it came out, then the LaserDisc, the DVD and the Blu-ray’s. I’m sure that this film might eventually see 4K, but we’ll also be rational. To that extent, this is – hands down – the best the film has ever looked. Kevin Smith was actively involved in the restoration and it shows on the most literal level. Colors have a bit more pop, detail has been improved and some of the grain and dirt that plagued other versions is now a thing of the past. The film was a bit step up from the 16mm Clerks (shot in black and white) so this was truly Smith’s first color film. That sounds odd to say about movies these days, but hey…it’s an interesting tidbit. Fans will enjoy this new transfer. I did.

The included DTS HD Master Audio mix certainly gets the job done, though this film has never been known for its audio. Vocals sound a bit more refined, surrounds (particularly during the game show sequence) are fairly active though the lion’s share of the mix is relegated to the front stage. As I mentioned above, I’ve heard this film in various stages of audio from the VHS’s Dolby Surround to the Dolby Digital 5.1 mix of the DVD and now we’ve got this. There’s not a lot else to say other than like the way this looks, this is the best that the film has sounded.

As Smith says, several times actually, Mallrats is one that’s gained quite the fan base since its release back in 1995. Granted, it’s not Smith’s best work, but I found it enjoyable to revisit the movie after a few years. That and if you want to see Shannen Doherty in her prime and a young Ben Affleck – it’s got it all. The video and audio are both upgraded and there’s enough supplements to keep even the most rabid fan entertained for hours.