I heard, in an interview somewhere, that one of the reasons network television is faltering somewhat is because of cable television.  That’s an odd statement, but the way the man told it – it actually made perfect sense.  He said that network TV, once the only “go to” place for quality programming, is now having to compete against networks like AMC, USA, the CW and others due to their original programming.  “Ten years ago, these networks were showing reruns of Gilligan’s Island.” he mentioned!  And, when you think about it, that’s a very poignant statement.  I mean take a look at the lineup of shows in the USA network; you’ve got some pretty interesting and well-written series that include Burn Notice, White Collar and Suits.  HBO has long since had their hand in the bag and they show no signs of stopping.  This brings us to AMC that has a trio of highly-rated shows like Mad Men, The Walking Dead and Breaking Bad just to name a few.  Bottom line, television isn’t what it used to be and for those that have never seen an episode of Mad Men –what’s the hold up?

This fifth season of TV’s favorite male-dominated show about advertising is, in essence, more of the same yet totally different as well.  The days of the early 60’s are behind Don Draper (Jon Hamm) and company and we find that this takes place between Memorial Day 1966 and the Spring of 1967.  We get an inside look at the marriage between Don and his new wife, Megan (Jessica Pare) and being distracted by her leads him to falter on his duties at the advertising agency.  But the show isn’t all about Don as we see that others like Pete (Vincent Kartheiser), Joan (Christina Hendricks), Peggy (Elisabeth Moss) and Roger (John Slattery) are also facing some new beginnings of their own.  This season, to me, seemed to be a bit of a slide, not because of the acting or writing as both are still top notch, but it just seems that shows always have to go and start changing things.  I guess there’s a stagnation issue, so they feel “change is good”, but still I didn’t like some of the things I saw this season.  The show is still amazing, of course, I just didn’t feel it measured up with the previous seasons in regard to plot.

As with previous seasons of the show, the 1.78:1 AVC HD image that looks nothing short of spectacular. Having never seen the show in its original broadcast I can only assume this is looks similar, though based on what I’ve seen with other television shows on Blu-ray, I’d give the edge to the disc version. The costume and set design of the 60′s looks amazing, with detail being so incredibly meticulous you can see the tweed in their suits. Flesh tones seem a bit washed out, but I think that’s intentional. Contrast is right on and I’m hard-pressed to find anything to nitpick here.

The DTS HD Master Audio soundtrack is primarily a front-heavy soundtrack (as are most television shows) and dialogue-driven. The audio is crisp and sharp and a very few instances in which the surrounds come into play. I usually like to prattle on about the audio, but there’s not a whole lot more to say here – it’s a TV show and the sound is faithfully represented on this Blu-ray set.

Like the previous seasons of the show, this fifth season comes with plenty of supplements to keep you interested and entertained.  Each episode has a commentary track, from the opening two part episode “A Little Kiss” to “The Phantom” that concludes the season.  Matthew Weiner is present on every episode and is joined by a variety of cast and crew members including Jon Hamm and John Slattery on a few.  “Mad Men Say the Darndest Things” takes a look at the writing style of the show. “What is There to Love if not the Enigma?” profiles artist Giorgio de Chirico and his influential work with mannequins.  “The Party of the Century” gives us a look at Truman Capote’s Black and White party.  “Scoring Mad Men: Themes of Season 5” showcases composer David Carbonara and Geoff Stradling and their work with the music of the series.  “The Uniform Time Act of 1966” gives us, yes, a history of Daylight Savings Time.  Lastly we have a Newsweek Digital Gallery which shows us covers from 45 years ago coupled with some major stories from the late 60’s. 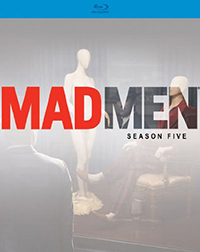