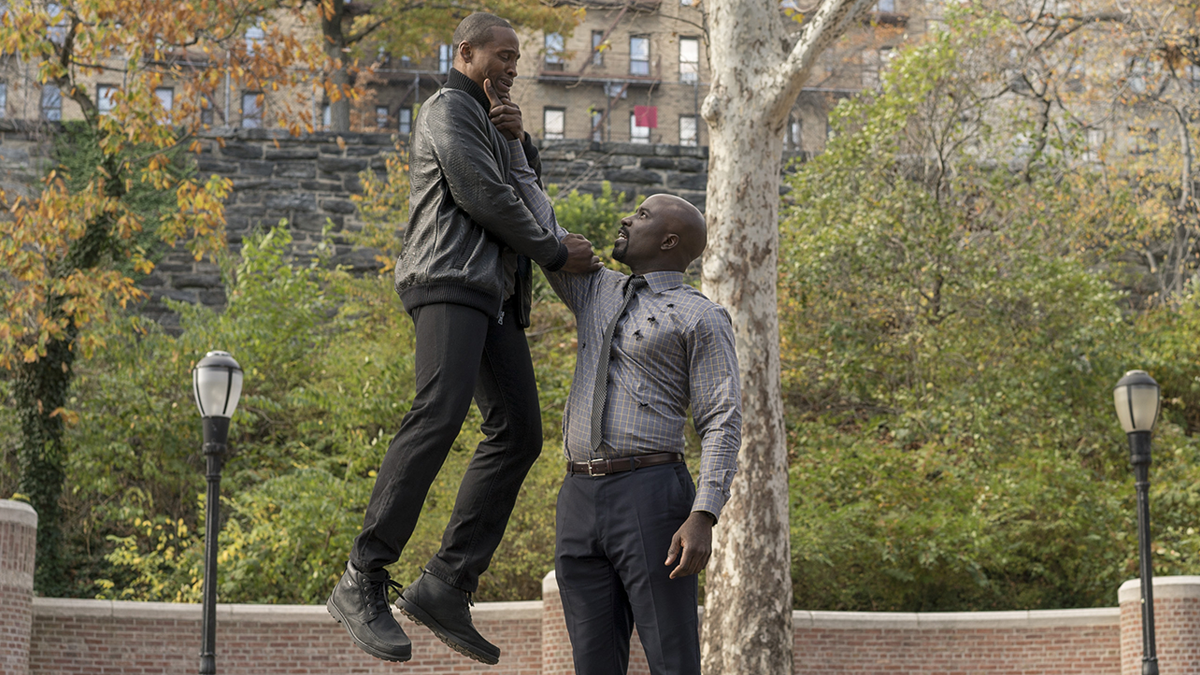 It’s really hard to plot the Marvel Universe. Given the success of the films, it’s now extended to the small screen bringing some familiar and some not so familiar names to the plate. It started with Daredevil in which we meet Matt Murdock, a blind lawyer working in Hell’s Kitchen. This set the stage for more New York-based series and Jessica Jones. We’ve now got a few more names on the roster with Luke Cage as well as Iron Fist. Most will recognize all of these names, all of whom are now gathered into one series – The Defenders. Confused? Intrigued? Both? Well, let’s get started.

Fans of the Netflix MCU (that’s to say, the MCU relegated to the Netflix series: Jessica Jones, Daredevil, Luke Cage, The Punisher, Iron Fist and The Defenders) will recognize Luke Cage (Mike Colter). He made his debut in Jessica Jones and, yes, “the world is ready for a bulletproof black man” as Colter said at Comic-Con. Picking up a few months after his appearance on said show, we meet Cage as he’s sweeping hair in a local Harlem barbershop. It’s not a glorious job, but it keeps him under the radar and that’s all he wants. But, as fate would have it, he’s drawn into conflict that catches the eye of Cornell “Cottonmouth” Stokes (Mahershala Ali, Oscar winner for Moonlight if you need a point of reference) as well as his cousin, Mariah (Alfre Woodard). The first season details the ongoing battle, verbally and physically, between Cage and Stokes, all the while showcasing some of Luke’s “abilities” and history.

Luke Cage, in addition to having his own show (a second season is in the works), is also a part of The Defenders. It’s in the viewers’ best interest to watch all of the series as they all loosely tie into one another. That’s odd, isn’t it?  A Marvel series intertwining with another. What will they think of next? Kidding aside, I enjoyed this first season and can’t wait for the next.

All 13 episodes are presented in a 1.78:1 AVC HD image that’s a bit on the dark side. Then again, given the character and some of her antics – it makes sense. Having watched this via Netflix, the Blu-ray offers a bit better image. There’s less compression, the colors seem a bit more lifelike and it’s basically an all-around better-looking version that it’s streaming counterpart. Don’t get me wrong, things on Netflix look good, but there’s just no substitute for physical media. Most sequences are indoors or on the streets of New York (Harlem, to be more specific), giving a more muted visual representation to one another. Detail is, of course, excellent.

The included DTS HD Master Audio mix carries some weight, but by and large this is a pretty standard affair. Some music and cut scenes offer a bit of ambiance, though the front-heavy mix is what carries the show. Vocals are sharp, well-centered and crisp. I had no trouble making anything out. There are plenty of walls smashed, cars dented and bullets deflected off Cage’s “unbreakable” skin. Certainly this could have opened the door for some more robust sound, but it is what it is and and it sounds fine. Viewers should be amply satisfied.

If you’re tired of The Avengers and company but still want to stay in the Marvel Universe, well you’ve got plenty of options. If the network shows (The Gifted, Agents of S.H.I.E.L.D. and so forth) aren’t for you, then Netflix has a quartet (five if you count The Defenders) that might be up your alley. I consider Luke Cage the best of the bunch and it’s worth a shot.