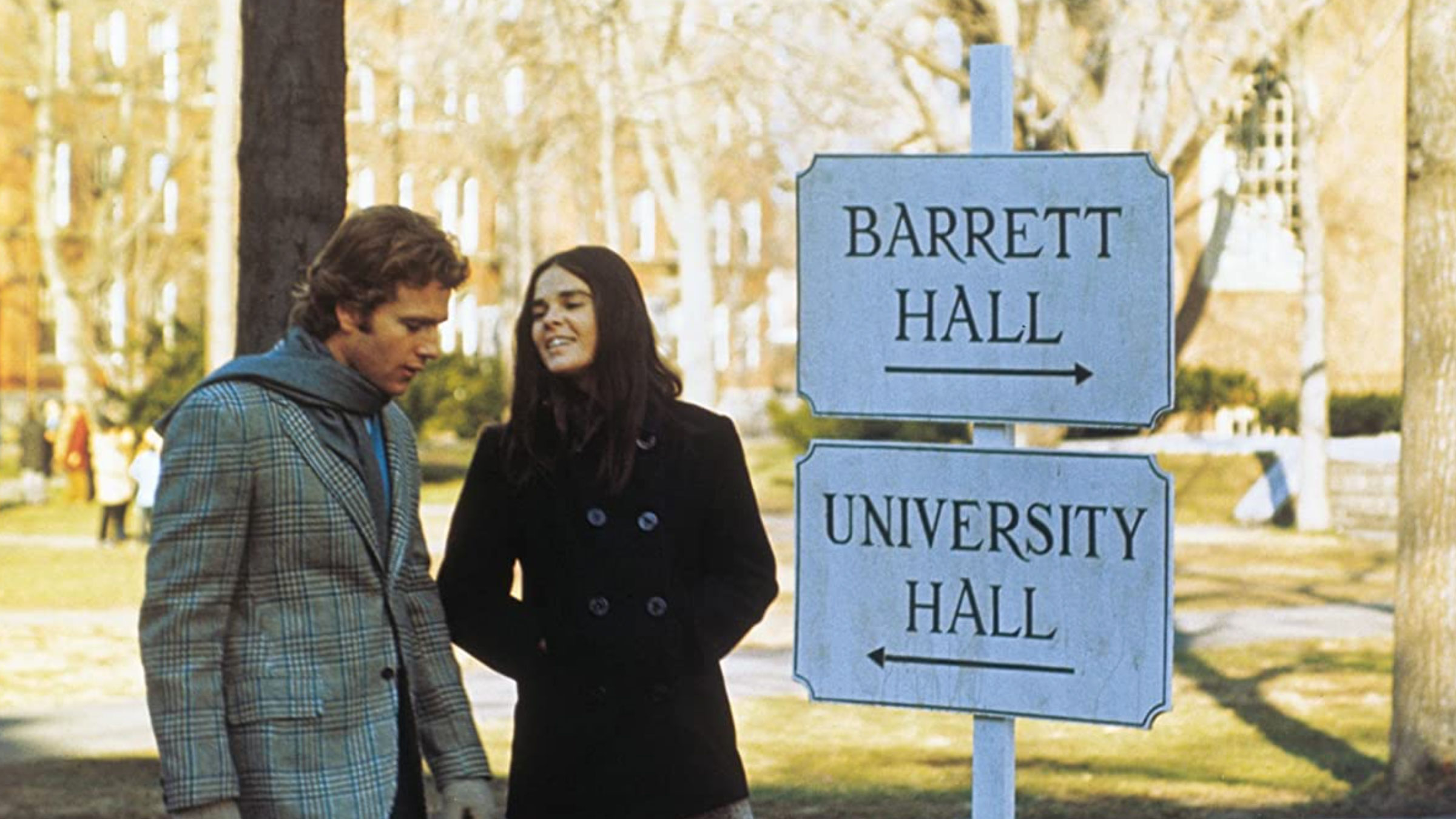 Oliver Barrett IV (Ryan O’Neal) comes from a wealthy family and attends Harvard Law, as well as being involved in the hockey program there. On the other hand, Jennifer Cavalieri (Ali MacGraw) has a more humble background and goes to Radcliffe, where she studies music. The two seem to have little in common, but once they meet and have a chance to talk, some sparks begin to appear between them. Oliver and Jennifer soon start a real relationship, falling more in love all the time, but their happiness is soon to be lessened. After they decide to get married, Oliver’s father (Ray Milland) threatens to remove him from the will, which leaves him pretty much disowned from his own parents. This takes a lot out of Oliver, but his love is strong and the two still get married, though their marriage begins at a low time in Oliver’s life. As time passes, Jennifer tries to patch up the relationship between Oliver and his father, but it does little good in the end. The two decide to have children and begin their own family, but some tragic news soon shatters their happiness.

In the realm of romance movies, Love Story is one of the better entries in my book, because it packs the emotional punch, but isn’t too sappy in the end. Yes, it has a lot of sap to be sure, but not as much as you might expect, never too much. This was a huge financial success and even garnered some Oscar nominations, so it seemed to have admirers on both sides of the aisle, both audiences and critics. The story is pretty basic and unfolds in predictable form, but most romance movies follow that formula, so I can’t be too critical in that respect. Arthur Hiller’s direction is solid, but never too flashy and that ensures the focus remains where it should be, on our main characters and the events that shape their lives. Ali MacGraw and Ryan O’Neal turn in good lead performances, while the supporting cast includes such names as Ray Milland, John Marley, and Tommy Lee Jones. I wouldn’t go as far as to call this a great film, but Love Story is one of the better romance movies of the time, so I think genre fans will be most interested. I was shocked to see Paramount has included some extras also, so the high price is more than justified in this case.

Although both leads here give standout performances, I think Ryan O’Neal’s work is a shade more impressive, though not by much. This was only his second feature film, but O’Neal seems so relaxed and natural, very solid work indeed. He seems to be able to play the regular guy very well and in this case, that’s exactly what the role needed to be. I find him to be a nice person, but not the usual “too perfect” man we often see in these romance driven pictures. In truth, it is how normal these lead characters are that make Love Story work, as it seems real, as opposed to a far fetched romantic fantasy of some kind. You can also see O’Neal in such films as A Bridge Too Far, The Main Event, Zero Effect, Tough Guys Don’t Dance, Paper Moon, and Green Ice. The cast here also includes Ali MacGraw (The Getaway, Convoy), Ray Milland (The Lost Weekend, Panic in Year Zero), John Marley (The Godfather, Cat Ballou), Katharine Balfour (Music for Millions, Tv’s Dark Shadows), and Tommy Lee Jones (The Fugitive, Natural Born Killers).

Love Story has never been the epitome of what I’d call “a perfect-looking film” and this new version doesn’t do anything to dissuade that. But anyone who’s seen the movie knows that this 1.85:1 AVC HD transfer is on the soft side. I don’t know if it was an early 70’s thing or not, but while it’s an interesting visual effect, it does tend to lessen the level of detail in the film. Granted this Blu-ray does improve upon that, but not by much. Colors are a bit saturated and again, the age of the film suggests a much more neutral color tone overall. Paramount’s restoration certainly helps this look better than it ever has, but I still found it a bit on the soft side.

It’s hard to make something out of nothing, so I’m glad we get the mono track here though it’s now got the moniker of “DTS HD Master Audio” next to it. Don’t be fooled, though – it’s mono through and through. The track is certainly sufficient with dialogue taking front and center (pardon the pun) and the score is presented as good as can be expected. There isn’t much else to say here, it’s a mono track and sounds as good as it can.

I’m going to have to call B.S. on the whole “Love means never having to say you’re sorry.” tagline. If I didn’t know how to say sorry, I’d have been divorced a long time ago. Still, I realize that’s not the point. Paramount continues their trend of these Paramount Presents discs offering up new audio and video as well as new supplements (though they are a bit on the shorter side). Fans of Love Story will enjoy this new release.