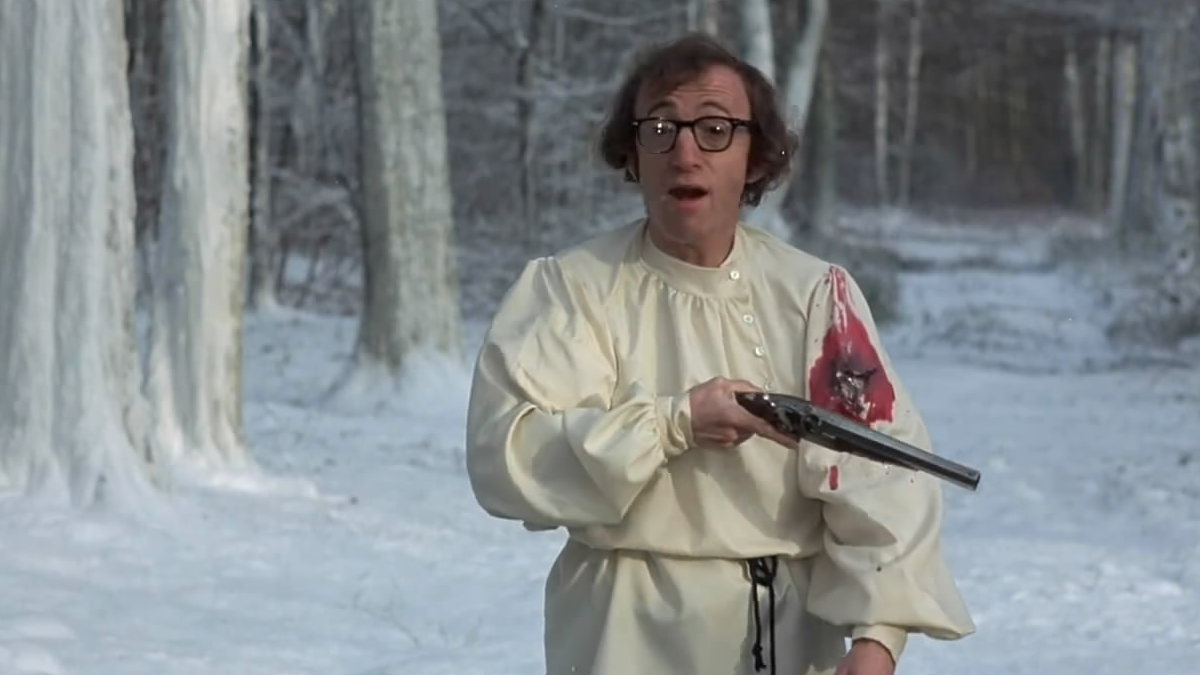 As you have probably noticed recently, I have been reviewing a lot of Twilight Time releases. In particular I have been going through their catalog of Woody Allen releases. Just this week I was lucky enough to get to interview Nick Redman who is one of the creators and owners of the boutique label. I walked away from that interview (which is linked on this page) with an even deeper love of that label and a pure respect for the people behind it. As mentioned in that article, if you want to get Woody Allen films on Blu-Ray from his MGM/UA days, there is only one game in town. I highly recommend picking up these titles before they disappear at www.screenarchives.com.

Love and Death was Woody Allen’s fourth film in his “early funny” period. The film is a satire of dry Russian novels like War and Peace and The Idiot. This film finds Woody Allen in his period where he mixed his intellect with a flair for Mel Brooks style spoofing. The plot revolves around Boris (played by Woody Allen) a neurotic Russian in love with his cousin Sonja (played by Diane Keaton.) She is in love with his brother Ivan, who is happily married. Determined to marry, Sonja marries an old fish merchant and cheats on him with everybody except Boris. Meanwhile, Boris is sent to war against Napoleonic forces. Although a coward, Boris inadvertently makes his way up the rank and finds himself with Sonja. Once Sonja grows bored with him she schemes that they should kill Napoleon.

Love and Death is the final film before Woody Allen really developed into the Woody Allen that I know and love. I am admittedly a much bigger fan of Allen’s more serious comedies and dramas. Fans of Everything You Always Wanted To Know About Sex (but were afraid to ask) will find themselves right at home here. This film runs circles around Bananas and is solid satire that is jam packed full of one-liners. It also tackles the subjects of love and death in interesting and funny ways. There are some really funny bits – especially the intellectualizing between Sonja and Boris, but I would still much rather enjoy his next few films which I consider some of his best. I would give this film a solid “B.”

Twilight Time did a solid job on the transfer of the film using an MPEG-4 AVC codec. For a limited release of a forty two year old film, the transfer looks good. There is a little bit of softness that was not uncommon from the films of that time. This is not Allen’s most beautifully shot film, but the scenes on the battle field definitely benefit from the high definition presentation.

For a Master Audio Mono track of a Woody Allen film, this track is pretty boisterous. The film itself is as chatty as most Woody Allen films but also has battle scenes which have cannon fire and other effects. I really enjoyed the soundtrack to the film that was performed by Felix Giglio using music by Sergei Prokofiev. The music reminded me of the excellent Mark Mothersbaugh score to Rushmore. The track has excellent clarity and dialogue is crisp. No problems here whatsoever.

Love and Death is a solid early entry by Woody Allen. This was the last of his “early funny” films and showed a real assurance in himself as writer-director that would become even more apparent in his later films. I really enjoyed the movie, but still prefer his next few films. The technical specs from Twilight Time are excellent, and if you read my interview with Nick Redman you will understand the lack of supplements on these Woody Allen disks. Another solid entry from a Twilight Time!