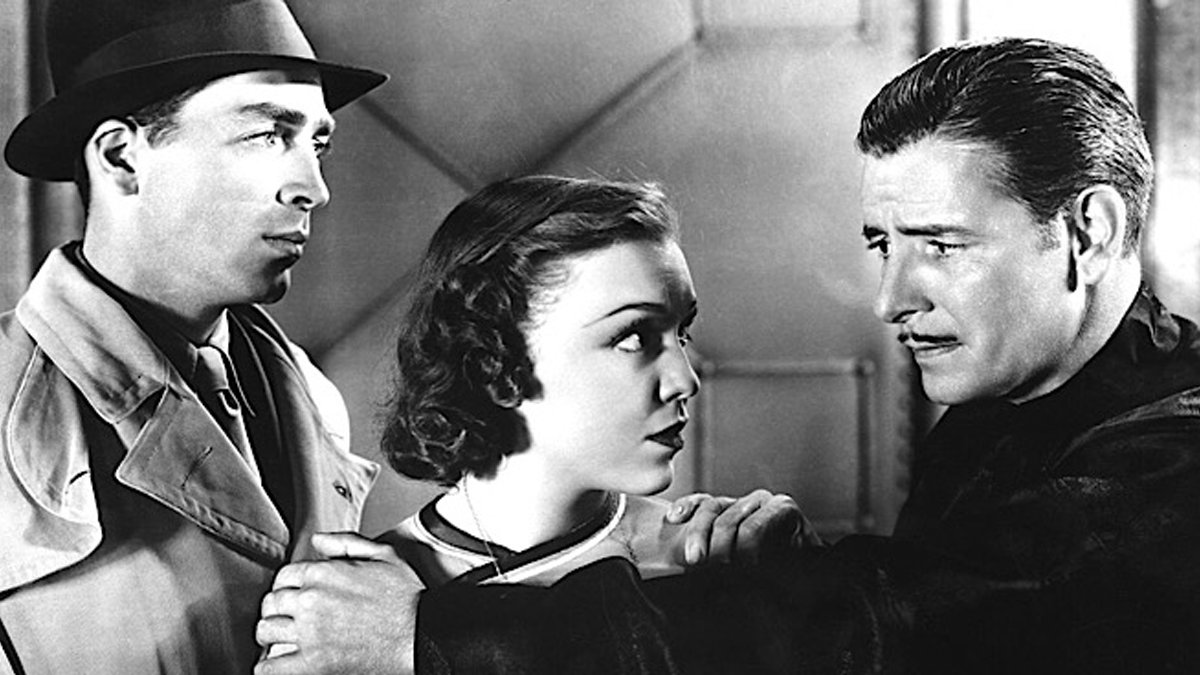 In China, war ravages the country, and a small group of people are trying to escape the war and flee to Shanghai. Leading this band is Robert Conway, who helps refugees and others make their way out of war’s way and to safety and freedom. Also with Conway is his brother George, an archaeologist, a man running from the law, and a beautiful blonde. Quite a colorful group, eh? Anyway, the group makes it’s way aboard a plane, and think they’ve made it, just a little ride to Shanghai, they think. Well, that ain’t happening here. You see, some hack has taken over the plane, and not only is the plane not going to Shanghai, it’s going in the total wrong direction! Eventually, the pilot can’t take it anymore, and the plane crashes into a damn mountain in the middle of nowhere, the outer region of Tibet. As you may know, the mountains near Tibet are what climatologists call “cold” and of course, our band of merry makers are in big trouble unless they find help soon. Needless to say, they don’t die in the frozen tundra, and they are discovered by a sect of locals, who take them to their village. Now, this is not your average village, this is…SHANGRI-LA! That being said, the place is supposed to be a haven for perfection, without worldly influence or bad dudes. What will our fateful friends do in Shangri-La? Will the locals eat Lovett, the archaeologist? Will they ever see their homes again, and more importantly, will they want to? Is Shangri-La truly paradise on Earth? All this and more if you buy this disc today!

Lost Horizon is a film classic by Frank Capra (It’s A Wonderful Life, Mr. Smith Goes To Washington), and Sony has taken painstaking care with restoring this movie. During World War II, the film was altered, to take out the pacifist messages, and of course, make the Japanese look like villains. According to the disc’s restoration materials, about twenty-five minutes were cut total, all but seven minutes of which were located and put back into the film on this disc. Even with the extensive lengths Sony went to, those seven minutes could not be found, but during the places those scenes would have been, a still photograph is shown while the soundtrack, which is complete, plays. I know, sounds funny, but it works very well. For those of you deeply interested in the restoration process, the disc has some nice features about it, with a demonstration and also a commentary. Not only is the film restored to it’s original running time, but Sony has totally restored the condition of the print as well. As the restoration demonstration shows, Sony used digital programs to fix all types of damage to the print, including large tears. A fantastic treatment for a classic film.

Lost Horizon features a talented cast, filled with outstanding performers. While the names may not be instantly familiar to all the readers, I’m sure you’ve all seen them in one film or another. Ronald Colman (Talk of the Town, The Prisoner of Zenda) takes the lead role, and does a superb job. A perfect fit for this role, Colman plays Robert Conway with an explorative nature, which makes the character seem that much more curious and observant, in turn. The rest of the cast is pretty much ensemble, with a slightly more emphasized role for Jane Wyatt (Pitfall, Boomerang) as Conway’s love interest. Also performing in Lost Horizon are Edward Everett Horton (Holiday, The Gay Divorcee), Sam Jaffe (The Tell-Tale Heart, Bedknobs and Broomsticks, The Day The Earth Stood Still), John Howard (The Philadelphia Story, Young Einstein-YES!), H.B. Warner (The King of Kings, The Ten Commandments), Thomas Mitchell (Stagecoach, Gone With The Wind), and Isabel Jewell (The Leopard Man). It’s also worth noting that several of these actors worked together on the film A Tale of Two Cities.

This has been a labor of love for Sony for quite some time and with this Blu-ray, it’s clear (pardon the pun) that a lot of time and effort went into this painstaking restoration. Without a doubt this is the best Lost Horizon could look, the image still shows it’s age, which is only to be expected. The visual quality is top notch, and the recent additions look right at home, with Sony really taking no short cuts to make this disc a great one. The film is presented in full frame, which is the original aspect ratio, and it is black and white. Black levels are very good, which is critical for a black and white film like this. Details are always visible, and print damage is non existent, other than slight wear to the print’s age.

Lost Horizon is not your audio driven demo disc, but it sounds good for the type of film it is. When they made movies back in 1937, they weren’t concerned with using all channels in your home stereo, so you get a very nice mono soundtrack. There seem to be a lack of hissing, pops and crackling noise that I often associate with films of this era. It won’t test the limits of your system, but then again it’s not meant to. All sounds are clear and clean, especially dialogue, which is crystal clear throughout.

The same supplements that were present on the DVD have made the leap to this Blu-ray which is nice, but it’s also disappointing that nothing new has been included.

Lost Horizon is a classic in every sense of the word, and this disc treats it as such. It has everything classic film could want, great acting, directing, and scale. I didn’t talk about it above, but the scale of Shangri-La is unbelievable, and the cost was unheard of at the time. According to the packaging, Lost Horizon cost over four times more than any Columbia picture up to that time. It is widely held that Columbia would have went under had Lost Horizon failed, but I think they’re very happy they took the chance. While I don’t think this film is for every modern fan of cinema, if you enjoy older films, you’ll love this one.