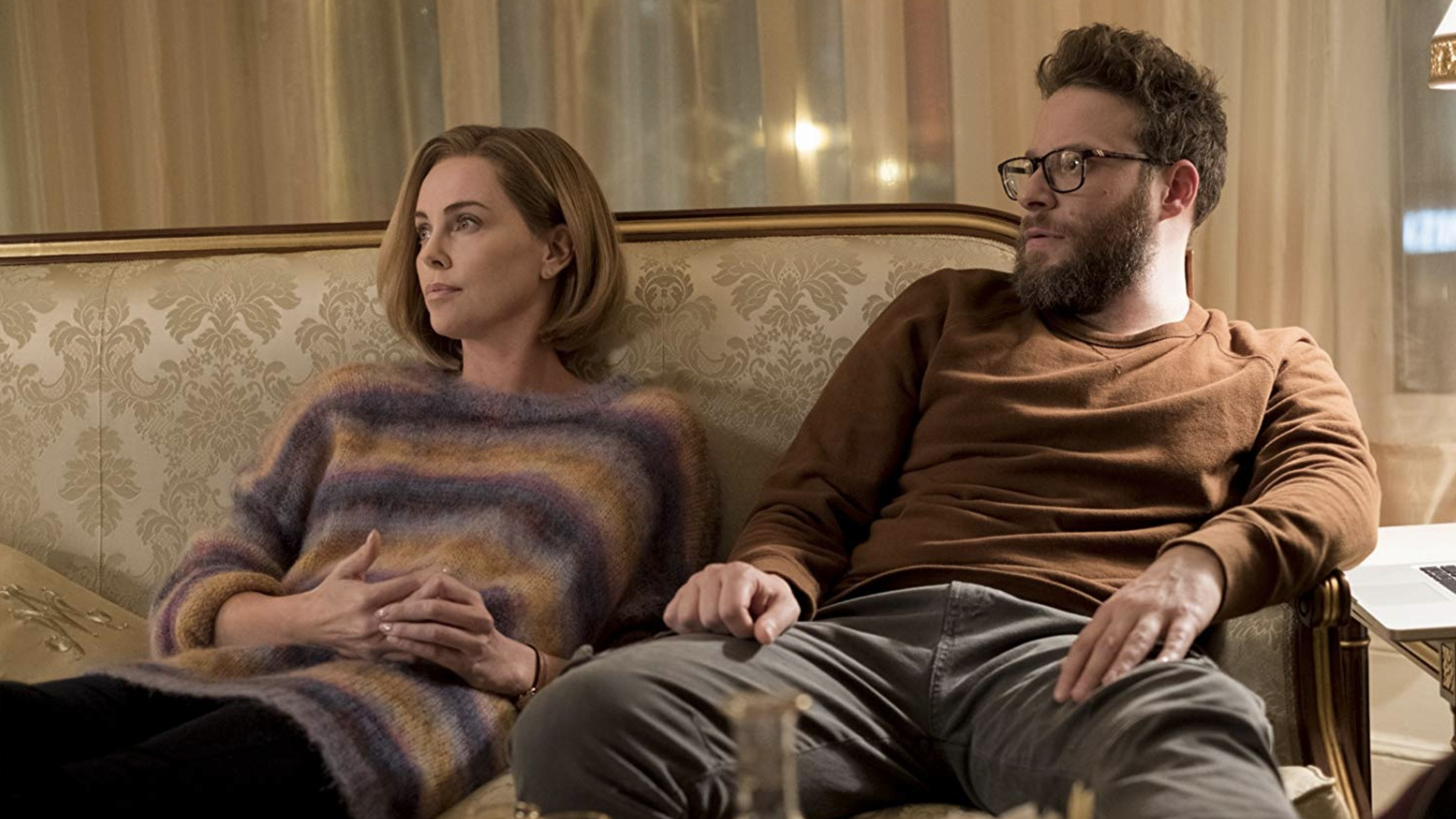 My wife recently informed me that horror movies were the new “it” genre. They were the ones making all the money and that romantic comedies were on the way out. I thanked her for the information, but it got me thinking…she’s right! Certainly rom com’s (as they’ll be referred to from here out) have been around as long as movies have, but they’re so contrived.  People like to be scared. It’s a fundamental human visceral reaction. This is why we have a plethora of films like The Conjuring, Us and Get Out. If this is indeed the case, then Long Shot thwarts convention by giving us a rom com. But it handles the concept a bit more intelligently than most other films of the genre. Let’s dig in and see why.

Charlotte Field (Charlize Theron) is the Secretary of State. She’s making a bid to run in the next Presidential election. At a party she runs into a journalist, Fred Flarsky (Seth Rogen). Coincidentally, she used to babysit him as a teenager and, wouldn’t you know it, he always had a thing for her (who wouldn’t)? Fred is hired on as Charlotte’s speech writer as, well, he’s good at what he does. As her numbers start to rise and the two start to spend more time together, there’s an intensity to their relationship that’s at the heart of the film.

Movies, any of them, work when there’s a palpable chemistry between the lead actors. It’s here with Theron and Rogen. It just works. And it’s a difficult task to mix political satire and romance, but they nail it. Add to that the direction of Jonathan Levine who’d previously worked with Rogen in 50/50 and The Night Before. And, as with most rom com’s, there’s a good supporting cast led by O’Shea Jackson Jr. and Bob Odenkirk. If there’s one thing that I know about films is that they’re cyclical. Rom com’s have withstood the test of time and though they may not be currently en vogue, give it time. And, as evidenced by this one, when all the pieces are there they can still work and, ultimately, still be satisfying.

Ah, the “it’s a new to Blu-ray movie and there’s really nothing wrong with it…” portion of the review! Well, in truth, that about sums it up. The 2.39:1 AVC HD encoded image is very pleasing to the eye (as is the always lovely Charlize Theron). Detail is sharp, colors are rich and robust and there are really no faults to report. It’s like riding on an airplane and landing safely. Yeah, there might have been a bump or two in the air, but you walked away from the landing and forgot about it five minutes later. And yes, I just used that analogy to describe how a movie looks on Blu-ray. You’re welcome. Moving on…

What was a bit surprising was the included Dolby Atmos track. Romantic comedies, by definition of the genre, aren’t usually that heavy on the audio front. And this is really no exception, though there are a few moments when the speakers do take control (Boyz II Men, anyone)? Still, as nice as it was to see an Atmos track on a new movie, I feel it was a bit wasted. Sound, vocals and directional effects are all there and do their job, but I just couldn’t get that extra “oomph” that I was expecting. So not a bad effort, but nothing to write home about either.

There’s a lot to like about Long Shot. It’s funny, topical and does the romantic comedy a great service in that it’s good! Theron and Rogen make it work with their on-screen chemistry. Technical merits are fine, but nothing outstanding and the included supplements make for a good overall viewing.