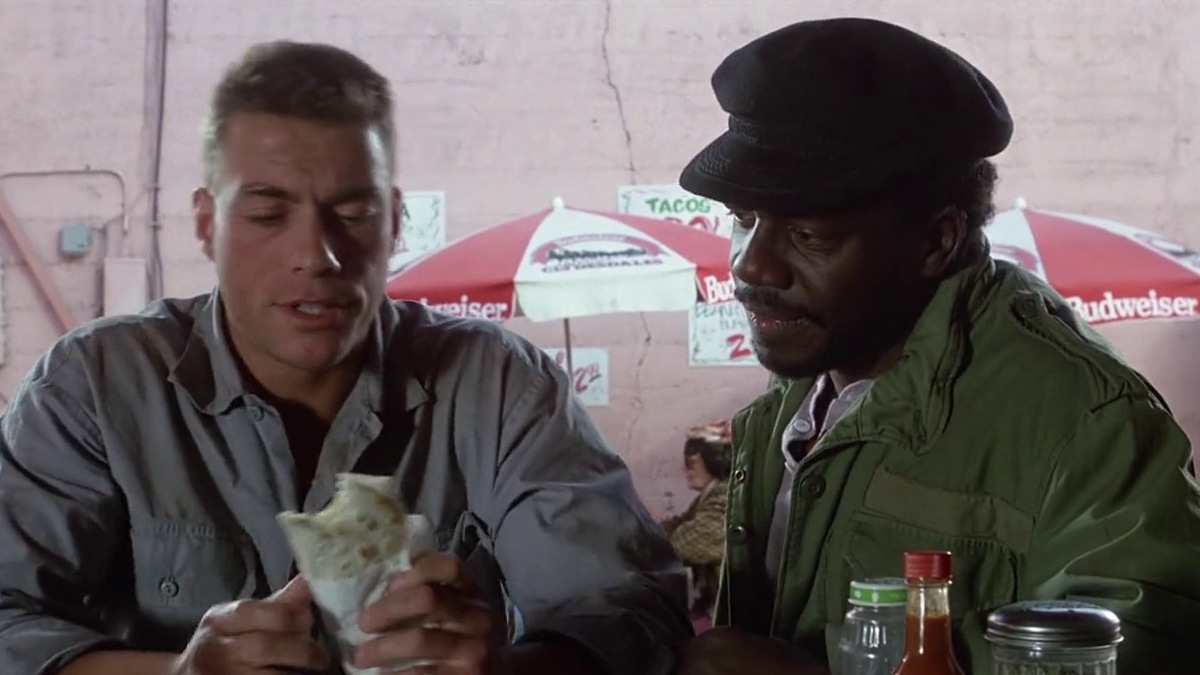 MVD Rewind Collection is quickly proving itself to be one of the most enjoyable cult labels for film distribution. A quick rundown of the titles they have released so far will let you know what type of films they are into: Attack of the Killer Tomatoes, The Return of Swamp Thing, Black Eagle, and now Lionheart. For people my age who grew up in the Eighties and Nineties, this label is a blast from the past. When I saw that they were going to be releasing the Jean-Claude Van Damme film Lionheart, my inner child rejoiced. When I received my copy in the mail, I put it in the player at my first opportunity.

The film begins with a drug deal gone wrong in Los Angeles. A man trying to purchase cocaine is set on fire by a street gang. At the hospital, his wife and child sit in the hallway distressed. The burnt up man on a gurney cries out for “Lyon!” In the French Foreign Legion in Djibouti, Lyon (Van Damme) receives word that his brother has been severely burnt. He had not received word for two weeks since the incident. Seeking to be released temporarily, his superiors refuse. Van Damme dramatically escapes from the camp and goes AWOL. Stowing away on a boat he makes his way to New York. In New York he sees a street fight with people gambling. He finds his way into a fight and handily defeats his opponent. This draws the attention of Joshua (Harrison Paige,) a fast talking street hustler that offers to be his manager. Lyon tentatively agrees on the condition that he can save up money from the fights to help his sister in law and niece in Los Angeles. Joshua introduces Lyon to the wealthy fight coordinator Cynthia (Deborah Reynard) and the world of high stakes underground fighting for the upper class.

This is classic early Nineties action filmmaking. There was a time in our country where we would pour into the theaters or into our respective video stores to watch yoked up people with thick accents kick ass in the name of the good old U.S. of A. Those days are behind us now and have been replaced with a deluge of computer generated garbage. Long gone are the days of slow motion kicks between two muscular dudes in a pool. It is really too bad. We didn’t know how good we had it.

This film was the film that helped make Van Damme a household name. Co-written by Van Damme and directed and co-written by Sheldon Lettich, who had previously written Bloodsport, Lionheart is Van Damme’s love letter to America. It stands out as being an action movie where the lead character’s moral values are beyond reproach. He is not interested in sex. He is not interested in gains for himself. The character has only one mission: to provide for his niece and sister in law. Van Damme injects a lot of his feelings about America at the time into the film and the viewpoint of America as a land of opportunity is a beautiful notion that is rarely highlighted in film anymore to our own detriment. Look, I know I am waxing philosophically on what is essentially a somewhat cliche action film, but it is important to look at these films as a time capsule of how people felt in a specific moment.

This was right before video games like Street Fighter II, Streets of Rage, and Final Fight would help to release a craze of video games and films about martial artists protecting themselves on the dangerous streets of urban America. I remember this craze as a kid and I ate up every moment of it. Then and now.

Ironically, if this movie was called Street Fighter, it would be an excellent choice for the name of the film. It is unbelievable that just a few years later they would adapt the video game in such a moronic way instead of using a script similar to Lionheart. All the work was done for them? Why did they botch the formula?

Lionheart is an action film that works for numerous reasons. Van Damme delivers one of his better performances in the film and will have you rooting for him from the beginning. Harrison Paige is a great foil to Van Damme’s character, injecting a lot of humor into the film in a natural way that fits just right. Sheldon Lettich’s direction is very similar to what you might expect from an early Van Damme film: slow motion kicks, crowd shots during fights, etcetera. That serves the film well and despite how many cliches the film has, it also has some surprising moments. Most notable is the final fifteen minutes of the film which has a surprisingly touching finale that I know I did not expect and helps the film to rise above some of its more cliche moments. There is also a really hilarious shopping sequence that is not as atrocious as the dancing scene in Bloodsport, but it still gave me a good laugh.

If you have not seen Lionheart, you are missing out. This is one of the more enjoyable reissues that we will see this year.

An excellent transfer of the film has been provided using an MPEG-4 AVC codec of a brand new 2K restoration from the original camera negatives. While this film was made on a minuscule budget, this 2K scan gives it the best presentation it has ever received. Like most films from this time period, it is a little soft in focus like all of the films at the time due to the prevalent film stock of the period. Fine detail is good and I found myself pleased overall throughout the duration. There is occasionally some noticeable grain, but all said and done, this is the best this film has ever looked.

MVD Rewind has provided an English LPCM Mono Track for the Theatrical Cut from the original recordings and a Dolby Digital 5.1 track and 2.0 track. I found myself watching the extended cut with the surround track and enjoyed it. This was 1990 surround for a mini-budget independent action film, so be prepared to hear some canned punch and kick sounds that will sound vaguely familiar to you. While the surround opens up the field pretty nicely, this film will never be a demo piece. Fans should be pleased with the clarity of the presentation.

Note: The original pressings of this film exemplified some mistakes in the audio transfer of the theatrical cut. MVD is currently working on a solution to the problem, but I would not let it dissuade you from a purchase.

Lionheart is my favorite MVD Rewind release thus far. It is classic Van Damme action that has a lot of heart. I could not watch this film without almost overwhelming amounts of nostalgia for my younger years and a beautiful time in this country. I am not sure if you will feel the same feeling, but if you do, it will be worth the price of admission. MVD have provided some excellent supplements and a good transfer of the film. If you are a fan of these types of films, I would move this to the top of your list for purchase. Highly recommended.