Roger Ebert was my favorite movie critic.  And I’ll tell you why. First off, I’ve always been interested in film. I guess I can call it “film” now, but when I was younger they were just “movies.” Through college, film classes, Friday nights at the theater with my friends, my love for “film” grew. And, wouldn’t you know it, I started a DVD review site a year after I graduated from college. You might have heard of it? But probably not. When I watch a movie, sometimes I miss things. We all do. So with the aid of the internet, I’d peruse a few reviews and would eventually find myself at rogerebert.com where he could tell the tale of a film, dissect it and spit it out so that the “common man” could actually understand it. I’ve always felt that some other critics out there must have a thesaurus by their side so that they could regale the reader with their vocabulary. And yes, I see the irony in using the word “regale” there.  Still, for me, and countless others, Roger Ebert could really communicate through his words the essence of a movie and it was his appreciation for film that made me appreciate so many more.

Life Itself takes its name from Ebert’s self-titles memoir. Documentary filmmaker Steve James (Hoop Dreams) worked in collaboration with Ebert and his wife, Chaz, to document what it was about Ebert that made him so notable and relevant. We’re treated to a bit of history of Ebert, his days at the University of Illinois where he was editor of the paper and his employment with the Chicago Sun Times. Ebert won the Pulitzer Prize and was summarily handed the job of film critic. What I found interesting was that Ebert’s life wasn’t always all about movies, he was a journalist first and foremost. But I suspect that his intelligence, drive and ethic – he’d have been successful doing pretty much anything. Still, it was the movies that made Ebert famous and we’re treated to some footage of he and longtime cohort Gene Siskel (who died of a brain tumor in 1999) that made the two a household name.

I still  frequent Ebert’s website, though, admittedly, without him at the helm it’s not quite the same.  And I found Life Itself fun, though a bit difficult to watch. Inter spliced between archive footage was footage of Ebert’s later years, his throat nearly removed and his cheeks and lips mainly lifeless bits of flesh.  He was still able to communicate through his laptop and his mind sharp as ever. Ebert and his work influenced the movie industry over several decades. His patented “thumbs up” has graced thousands of DVD and Blu-ray covers, he wrote the screenplay for Beyond the Valley of the Dolls, has authored countless books (not all film-based) and essentially brought the role of the movie critic mainstream. Life Itself offers a very visceral look at the life of a man who we all know and most loved. Take a break from the movies and check out the life of the man who influenced so many of them.

This is a bit tough to nail down seeing as that a majority of the footage is archived, some in varying degrees of decay.  Still, the main (new) parts were filmed in HD and look amazing. It’s sad to see Ebert in his final stages, the veins in his face, seeing through his mouth to the bandages that adorn his neck, but that was how he looked. Interviews with his wife and friends are all shown in a glorious 1.78:1 AVC HD image. There are segments from the 70’s and 80’s that are shown in full-frame which shows exactly how far we’ve come, technology wise.  I highly doubt that anyone will watch this and judge the A/V quality, but it looks the part.

The DTS HD Master Audio track is essentially geared to dialogue. Most documentaries aren’t really known for robust sound and this is certainly no exception. The vocals come through crisp and clear, Ebert’s digitized voice via his laptop sounds eerie, though the narration emirates and sounds rich and pure. There’s not a lot else to say here, though the surrounds come into play a bit, but by and large this is a surround mix.  Again, like the video, I doubt the audio will be too harshly judged.

The disc contains enough supplements to warrant a purchase and several are very interesting to watch. Let’s check them out. 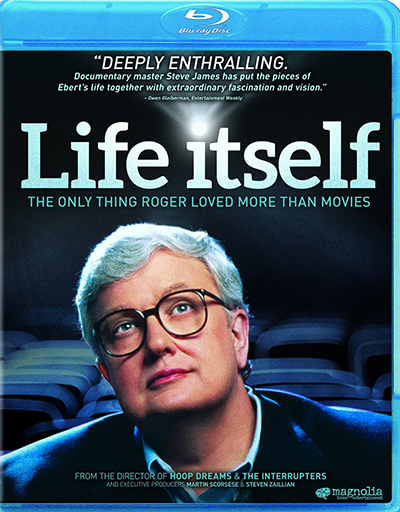