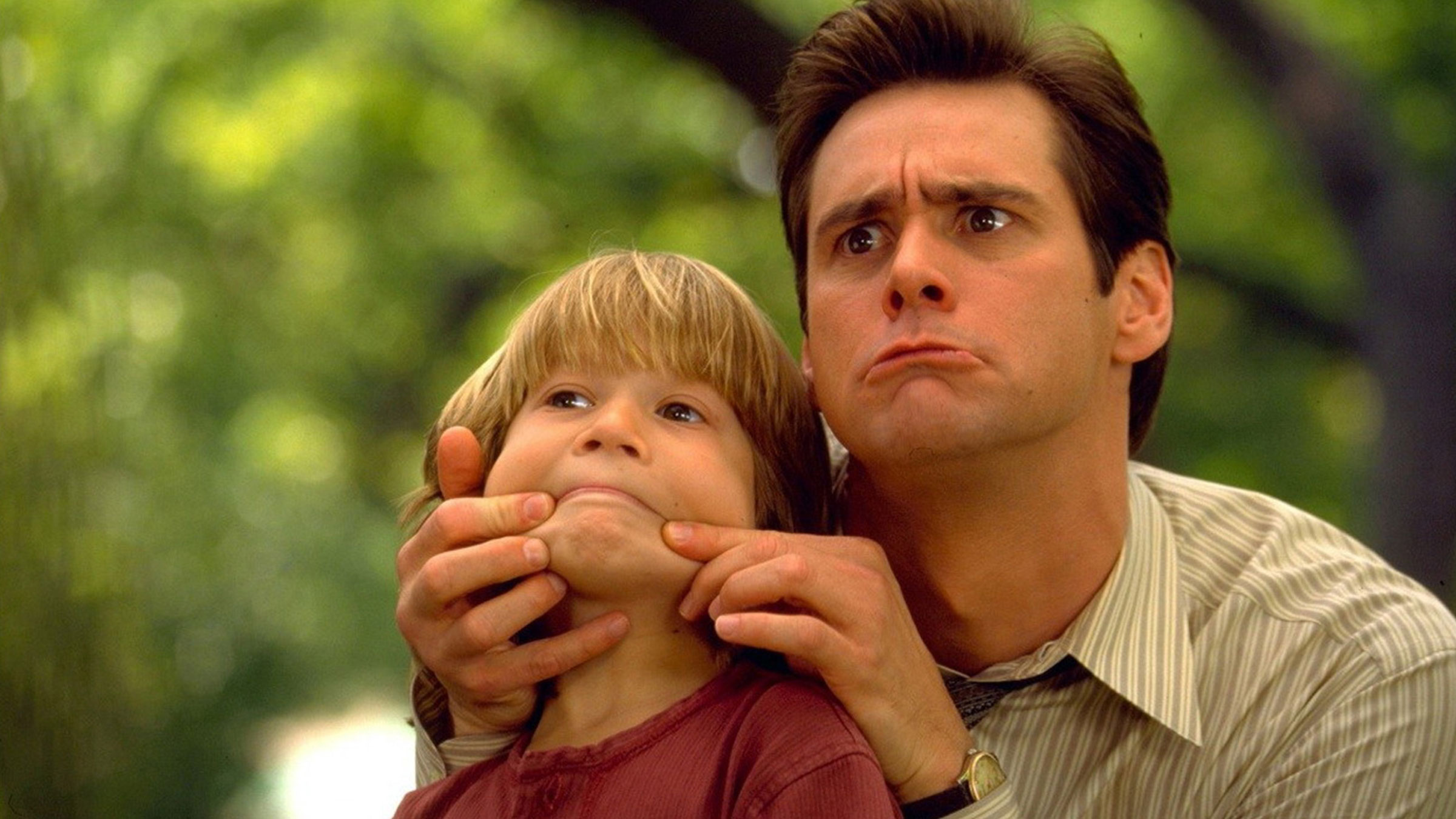 It’s now been nearly three decades since Ace Ventura: Pet Detective made a household name out of Jim Carrey.  Amazing.  I, like most others, knew him from the TV sketch show In Living Color which also featured a rising star by the name of Jamie Foxx.  Carrey’s physical humor and antics paved the way for a very good decade for him (the 90’s that is) and though he tried and tried to shed the image of his comic side with roles in The Truman Show, The Majestic and Eternal Sunshine of the Spotless Mind, I feel he’ll always be remembered for his comedic roles.  Having proved his worth in films like Dumb and Dumber, Batman Forever, The Mask and the Ace Ventura sequel, he took on a new role with longtime cohort and director, Tom Shadyac.  In this new endeavor, Carrey was to play a lawyer who was forced to tell the truth for one whole day.  Certainly in the wrong hands this could be a disaster, but this was Carrey at his peak and he was in top form.  The film opened to critical and commercial raves, and looking back 15 years later we have to ask ourselves if it’s stood the test of time.  Well, has it?

Fletcher Reede (Jim Carrey) is a lawyer.  A good one. He’s a fast talker in the most literal sense of the word and he’s been very successful at his job.  His job has taken its toll on his personal life, however, as he’s divorced and as Fletcher gives priority to his job, he tends to break his word to his son, Max (Justin Cooper) once too often.  It’s at Max’s birthday party that he makes a wish that his father could tell nothing but the truth for just one day.  This isn’t such a difficult thing for most people, but for Fletcher lying is away of life.  The obvious pratfalls ensue as we witness Fletcher go off on a police officer, ogle a woman in an elevator and the like.  But as the day progresses, Fletcher realizes how good he has it with his estranged son and is now leery of his wife’s (Maura Tierney) new love interest (Carey Elwes).  This begs the obvious question: is it too late for Fletcher to rekindle the flame of his family or has he become so engrossed is his work that it’s simply too late?

Liar Liar was, for a time, Jim Carrey’s highest-grossing film.  This was a few years prior to him donning a green mask and playing the Grinch and before he played God in Bruce Almighty.  I’d wondered how well this film had held up in the 25 years since it’s been released.  Certainly I got some laughs and realized how amazingly funny and talented that Jim Carrey was and still is (his performance in The Incredible Burt Wonderstone steals the show), though things just felt a bit…dated.  There’s nothing wrong with the film, it delivers and if you’ve never seen it, then I’m sure it still packs a comedic punch.  Maybe I watched it too much when it came to DVD or maybe I’ve seen so much of what Jim Carrey has had to offer that I just kind of shrug my shoulders and say “meh.”  Carrey has shown us, however, time and again that he’s immensely talented and Liar Liar will most certainly always be a jewel in his crown.

It’s been a while since I sat down to watch this film. Not necessarily because I don’t still like it, it’s just that perpetual “to be reviewed” pile that always seems to get in the way. That said, I do still have the 2013 Blu-ray and was excited to sit down with this new edition and do a little comparison. It appears that the 1.85:1 AVC HD encode has gotten a bit of a facelift from Shout! Colors seem a bit more warm and natural, detail seems improved and it seems to have a more “film like” appearance. Liar Liar, in my opinion, has never looked bad by any means. Heck, I remember renting it on LaserDisc and burning copies to VHS to rent to my fraternity brothers. They seemed to have no problem with the way it looked back then! I kid. Suffice it to say that short of a 4K version, this is the best the movie has ever looked.

The same DTS HD Master Audio soundtrack included with the 2013 Blu-ray is included here. Granted, dialogue-driven physical comedies aren’t always the best examples of dynamic sound, but the movie and its new sound mix reflects that.  Yes, the front stage is overly heavy with some sound effects here and there and the surrounds do chime in here and there, but there’s really nothing impressive here.  It delivers the goods and I doubt anyone will be too upset by the way this sounds, but this is your standard issue DTS mix.

Shout!Factory is one of the studios, like Criterion, that actually does go out and produce (or procure) new supplemental material. We get a few new features as well as some legacy ones included.

A quarter of a century has passed since this movie came out and time has actually been pretty good to it. I’d forgotten about some of Carrey’s antics in some of his earlier roles and found myself laughing out loud on more than one occasion. Shout’s new disc adds a few supplements as well as a good-looking transfer. If you’re looking for the definitive version of Liar Liar, look no further.