Harry Hannan (Roy Scheider) witnesses his wife gunned down in cold blood at a restaurant one day. He begins a slow descent into paranoia as he feels his everyone and everything has turned against him. He even begins receiving death threats, and begins to wonder if he was the one who was supposed to be killed rather than his wife. Jonathan Demme (Silence of the Lambs) directed the film and it will likely draw similarities to some of Alfred Hitchock’s work. The film also features small performances from Christopher Walken and John Glover. Watch for an early appearance from Max Wright who is best known from TV’s Alf. As mentioned, the film is very close to Hitchcock’s work in that the film’s protagonist is unsure of who is after him and trying to solve the mystery himself. He is very much like the audience in that he is never quite sure what is happening to him either.

It’s hard not to be drawn to this film by the posters alone. The climax leads to Niagara Falls, and the posters depict a scene late in the film with Scheider holding onto Janet Margolin’s hand. Margolin plays Ellie. She is an anthropologist who is leasing out Harry’s apartment. He learns of this early in the film, but it comes as a surprise to him. She eventually becomes a much bigger part in the film with Harry not sure what exactly she’s after. For the most part, the film is very nicely paced, but it does tend to lag in the middle a bit. Things do pick up toward the end, however. The film is based on the novel The 13th Man and Demme handles the material nicely enough. Scheider is a strong leading man, and the central mystery is intriguing enough to hold our attention. It’s worth checking out, but maybe not something that requires a lot of replay.

Kino has done a fine job with this transfer. Outside of a few instances of grain here and there, the print is pristine and free of other defects. I was surprised by a film that’s now 35 years old just how good it looks. Details are strong throughout with nice background shots as well. The climax, especially, shows great details. Flesh tones appeared even and smooth with no over-saturation. In short, this transfer satisfies. The image is AVC encoded with a 1.85:1 ratio.

The DTS HD track is also nice. The climax and Niagara Falls shows strong range and makes good use of the rear channels with the water splashing behind us, it really involves us. Dialogue is always clean sounding as well. There are also a few chase scenes in the film, and that adds a nice level of detail when we can hear plenty of background noise. Like the transfer, this track will please fans. 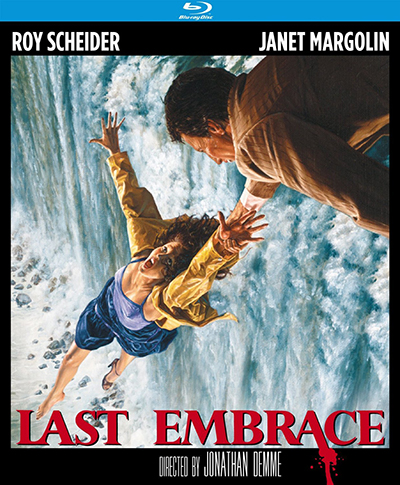