Lately, I don’t know what it is, but I’ve been seeing a lot of zombie movies. I’ve never really been much on horror movies (or in this case, a zombie movie) but I’ve certainly heard of George Romero. Some forty years ago he created a classic with Night of the Living Dead. Time has passed and now he’s offered up Land of the Dead (not to be confused with the recent Dawn of the Dead in which our heroes are stranded in a shopping mall). One thing that all of these movies seem to have in common, and even the very tongue-in-cheek Shaun of the Dead is that they don’t really tell why things happened the way they did. It just goes on the assumption that the audience will understand that something happened along the way and that there are now dead people walking around the Earth looking for human flesh to eat. Ok, I can accept that but we have to ask ourselves what’s really worse: being really “dead” or being dead and then being brought back to life as a zombie?

In Land of the Dead, we see that it’s been several years since the dead started walking the Earth and industrialist Kaufman (Dennis Hopper) has taken the initiative to restore peace to the world. When I say “taken the initiative”, I mean that he’s secured an office building, hired security to keep out the undesirables (zombies) and charges and arm and a leg for a luxury apartment. This seems to have been working well for him and his hired guns are good at what they do. Led by Riley (Simon Baker) and Cholo (John Leguizamo), the two are as different as night and day. Riley wants to go North and get away from everything and live a peaceful life and Cholo wants to get enough money where he can move into the high rise. Unfortunately Kauffman doesn’t see things that way. To add fuel to the proverbial fire, the zombies seem to be able to do something no other zombies are able to: they’re actually learning how to communicate with one another. The leader, Big Daddy (Eugene Clark), who communicates through a series of grunts and growls, is leading them towards the city though we don’t really know why. And Cholo has hijacked “Dead Reckoning”, a supped-up RV of sorts, which is Kauffman’s only way of escape. Can Simon and his entourage save the day, avoid the zombies and still manage to head North or is the entire world doomed (again)?

As I mentioned before, I’ve never really delved too deep into the world of “zombie movies”. Each one seems to have a particular flare. Do zombies only eat flesh and if so, why? Why don’t the people who aren’t zombies merely pretend to be zombies so they’re not recognized? I mean, how smart is a zombie really? They don’t have the capacity for logic, but they can tell a human being in the blink of an eye? Oh well, I suppose that some zombie questions are best unanswered. Romero shows us that he hasn’t really lost his touch. He’s older and supposedly wiser now and Land of the Dead does have its share of graphic violence. We see the zombies not only eat the humans, but we also see the ripping of body parts, faces and other appendages as well. Granted, we know it’s all fake but it might not be for the feign of heart. As far as zombie movies go, I’m not really sure how this one would rank but if you’ve seen one then you’ve seen them all. Right?

There are two different versions of the film, the theatrical cut and the unrated version. Both have received new 2K restorations and it shows – on a most literal basis. The 2.35:1 AVC HD transfer brings new life (sorry, had to be said) to the transfer as it looks very sharp and clean. The movie is dark, as most zombie movies should be, and though there are many opportunities for the transfer to falter, it rarely disappoints. There’s no edge enhancement to speak of and flesh tones, for lack of a better word, are on par as well. The film is dark, though contrast seemed strong and consistent. Both versions look spectacular and either version you choose will leave you with a warm and fuzzy feeling inside.

Both versions feature the same DTS HD Master Audio track and there are several instances of gunfire. Dialogue is very crisp and clean with little distortion, too. I found that the surround effects really added a lot to the soundtrack. How else can you experience a zombie movie if you can’t literally hear the flesh being ripped off the person? Exactly. You need those discrete sound effects that heighten the mood. Directional effects seem a bit more pronounced, especially when “Dead Reckoning” gets going and is mowing down the undead. It’s a good, strong track that’s sure to please.

This was the fourth, and last, title in one of the most prolific series of zombie films ever made. While it doesn’t exactly live up to the iconic status as its predecessors, I still enjoyed it. Shout!Factory has done this one right with new transfers, new supplements and giving us two versions of the film. This one is worth the upgrade. 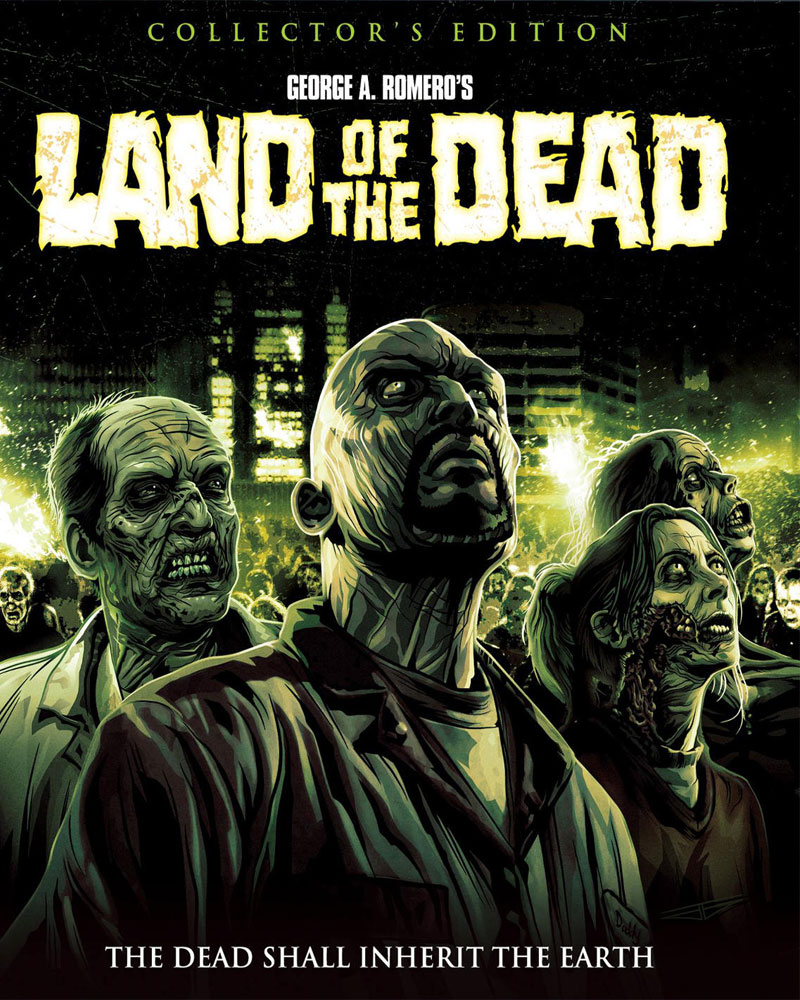