Sarah (Jennifer Connelly) is a beautiful young woman, but she spends more time with books than she does with boys. This might sound strange, but she loves to get lost in the worlds of the books and surrounds herself with them. She often imagines herself inside the stories, but of course, she knows that is pure fantasy and nothing else. When her parents insist that she baby-sit her baby brother Toby, she seems resentful, but agrees. As the night passes, the baby cries and cries and cries, which drives Sarah up the wall. After hours of the constant crying, Sarah reads aloud a wish that goblins come and take away Toby, but little does she know that her incantation was just the right combination of words. Soon enough, the goblins do come and take the young child, leaving Sarah in a state of panic and disbelief. When Jareth (David Bowie), a Goblin King arrives however, she begins to realize how serious the situation is. He tells her she has thirteen hours to navigate the labyrinth around his castle, or Toby is lost forever. Jareth’s castle is deep inside the labyrinth however, surrounded by traps, tricks, and a host of unusual inhabitants. If she can traverse the maze, then she can get back her little brother, but it won’t be easy. Even with the help of some labyrinth folk, can Sarah manage to rescue little Toby in time?

What happens when you combine the magic of Jim Henson and the funding of George Lucas, throw in the presence of David Bowie, and top it off with the innocent beauty of a young Jennifer Connelly? The answer of course, is Labyrinth and this movie has enjoyed a consistent audiences of folks of all ages. A blend of live action, Henson’s puppetry, and Lucas’ knack for special effects, Labyrinth is a mystical journey into a world of fantasy, loaded with quirky characters, exotic locations, and stunning visuals. As you’d expect from Henson, the puppets look great and are well detailed, so they work well alongside their human counterparts. I love some of the smaller creations, even the ones that just serve to populate the scenes, as they look cool and add depth to those sequences. On the same front, the sets look incredible and have the same attention to detail, which builds atmosphere and a sense of realism. The special effects are solid in most instances, but a few sequences were poorly executed and given Lucas’ penchant for revisiting his productions, I’m surprised at least a couple weren’t touched up a little. Even with some flaws, this movie is fun and has a real sense of magic, so its more than recommended.

She has become a sex symbol, box office draw, and even Oscar winner, but before all that, she was in Labyrinth. This was only her fourth feature film, but she seems at ease and this case, that’s impressive. Given the talent that surrounded her and the odd nature of the material, she could have been overwhelmed, but that wasn’t the case. Connelly plays off her puppet costars well and has a genuine sense of wonder about her, as she explores this unusual and unremarkable world around her. I don’t think this kind of performance wins critical awards, but her presence brings a human side to Labyrinth and of course, that is crucial to the film’s success. We need to be grounded in the real world as we soak in this mystical realm and Connelly serves as that grounding, so her great effort really pays off. Its impressive to see such a young actress hold her own, especially in an unusual production like this one. Other films with Connelly include Waking the Dead, Phenomena, The Rocketeer, Dark City, Higher Learning, and A Beautiful Mind. The cast also includes David Bowie (The Last Temptation of Christ, The Man Who Fell to Earth), who seems a little out of place at times, but is still fun to watch.

It’s been a while, a long while, since I’ve seen this film. To be honest, I don’t know if I’ve ever seen it all the way through – maybe just bits and pieces here and there. But with the arrival of this Ultra HD/4K version, I figured that I’d waited long enough and figured it was time to revisit 1986. Sony’s UHD discs are among the best out there and I was curious as to what they would (or could) do with a film that’s now 30 years old. Most all of their other efforts have been with recent films, but there’s not a whole lot involved in making those look good. I’d watched some of the special features first and those don’t really set the bar too high when looking at some of the scenes in the movie. Thankfully once I put the 4K disc in, my worries were a thing of the past. As mentioned, I’d never seen the film all the way through, so looking at this was somewhat of a marvel. The colors look rich and vivid, detail looked razor sharp and from what I’d seen on the features, it was a night and day difference in picture quality. This 2.35:1 HD image is certainly the best the movie has ever looked and I might have to dig thought my old DVD collection to see if I can compare it to the Superbit version that Sony released a while back. Suffice it to say that fans of the film (they’re out there) will not be disappointed.

Not only is the movie sporting a much improved picture, but the included Dolby Atmos (and Dolby TrueHD) soundtracks really make use of the music. Of course with David Bowie as the star, we can expect a few tunes here and there and they sound superb.  Some of the stereotypical 80’s synthesizer effects sound a bit cheesy, but by and large I was really taken back by how rich and robust this sound. Jennifer Connelly’s voice was a few octaves higher back in the day, but overall vocals were very pure and crisp.  Surrounds were used sparingly, yet effectively. On the whole, it’s a great sounding mix that’s sure to be appreciated by fans.

In many ways Labyrinth was ahead of its time and thirty years later I’m willing to be there are still legions of fans out there. This might have been a rather obscure choice for Sony to release in the fledgling 4K format, but I have to admit that they did a great job. The new picture and sound are welcome improvements as are the new features. For fans of the film, this is a no brainer. 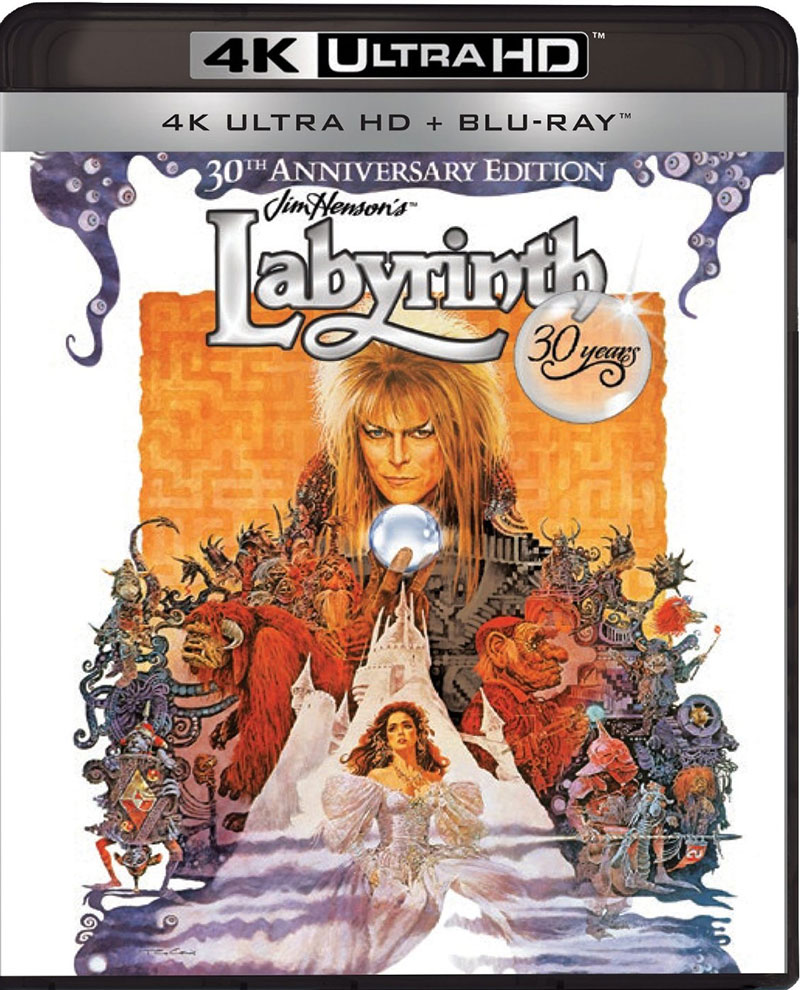