I’m willing to bet that the night of February 26, 2017 is a night that the cast and crew of La La Land won’t soon forget. True, the film won six Oscars in some very major categories, but it’s the slip up between actors Warren Beatty and Faye Dunaway that will most likely be remembered for one of the biggest errors in the history of the telecast. The wrong film was read as winning Best Picture. Ultimately this went to Moonlight as the best film of the year, but not before the ensemble from La La Land gathered to accept their award. Oops. That being said, it wouldn’t have surprised anyone had the film picked up the statue for Best Picture and after seeing it, it would have been well-deserved. Yes, it’s that good. A throwback to the Warner musicals of the 50’s and 60’s, La La Land is a film that’s in love with Hollywood. The two stars, Ryan Gosling (who lost the Best Actor Academy Award to Casey Affleck for Manchester by the Sea) and Emma Stone (who won Best Actress), have worked together before – twice. In 2011’s Crazy, Stupid, Love. and in 2013’s Gangster Squad. Start tappin’ your toes, we’re going to take a trip…

Opening on a crowded Los Angeles highway, we’re treated to a song and dance routine that’s a good indication that we’re not in for just another film. We’re introduced to Sebastian (Ryan Gosling), a struggling jazz pianist who longs to open a place of his own. And Mia (Emma Stone), a struggling actress trying to make her mark in Hollywood. She works in a coffee shop at the Warner lot just to make ends meet. They meet, twice – sort of. But fate has a way of intertwining young lovers and soon Sebastian has a gig in a successful band that takes him on tour. Mia, frustrated with her lack of success as an actress, writes her own play. But when they’re together they sing and dance. And they fly. Literally. Life has a way of making things. There might be a future for Sebastian and Mia and there might not be. But that’s not the point. In La La Land, anything is possible and it shows that the journey is the most exciting part of it all.

As good as the film was, there will be those who won’t like it. It’s not that it’s a polarizing film, truthfully there’s nothing to dislike. But there are those that aren’t into characters singing and dancing (and certainly not in 2016). But Singin’ in the Rain is among my favorite films and there’s more than a few references to it here. And that’s what’s so great about a film like this. Movies are meant to entertain, they’re meant to be an escape from your everyday life. Sit back, get lost in the characters and the songs. Get transported to another place. As another reviewer put it “…every musical number puts a smile on your face…” and it does. This is part of what made Hollywood great in the first place. In a world of comic book characters come to life, pointless re-makes and the like – there are films like this. Truly for a movie-lover like me, this is something to behold. And therein lies the fun!

This isn’t a movie you’ll want to watch on an old school 4:3 TV. Nope, this is shot in Cinemascope just like the musicals of yesteryear and it sports a very wide 2.55:1 aspect ratio. That’s right folks, you’ll feel like those black bars are taking over your screen! Truthfully, to fully pay homage to the musicals of the 50’s and 60’s, I think this was a wise decision and it even took me a few minutes to realize that the aspect ratio was abnormal (other than the brilliantly-colored “Filmed in Cinemascope” logo that flashed across the screen).  Let’s get one thing straight – this movie oozes color like it’s going out of style. From the candy-colored dresses, to the scenes in the planetarium to the An American in Paris style dance at the end. It’s bright. It’s bold. And it’s lovely. The film is also available in 4K which I can only imagine offers some greater color depth. Detail is so amazingly crisp and precise, blacks are stark and dark and the entire film seems to just reek of a film made 50 years ago.

There are a few very wide shots that showcase a bit of vignetting (black spots around all four corners of the frame). This is noticeable in some shots on the street and if you look closely, the road will tend to “bow” a bit from edge to edge. It’s normal for a wide shot. There’s very little else to say. It’s a movie that simply bursts with color and it makes the most of it. No doubt the wider format and the use of color, costumes and locale helped make this film what it is. It’s amazing on Blu-ray.

There are very few times when my wife (who watched this with me) actually says “Wow, that really sounded good!” She was referring to the Dolby Atmos demonstration prior to the film’s beginning, but she was right. This musical runs the gamut on every sound, noise and nuance imaginable. The Dolby TrueHD mix is no slouch either. From the opening montage on the Los Angles highway to the Academy Award winning “City of Stars”, the film simply radiates one of the richest, most pure tracks I’ve heard. Vocals are pure and crisp, surrounds are used and sound especially robust during the acoustic jam session. The Low Frequency Effects make their mark as well. Simply put, this is sound at its finest.

There are very few films that live up to the hype (for me), but La La Land is one of them. Then again I’m a fan of musicals and this was right in my wheelhouse. My only regret is not seeing it on the big screen. The chemistry between Ryan Gosling and Emma Stone is palpable. It’s what makes the movie work. Lionsgate’s disc sports one of the best-looking and best-sounding mixes that I’ve experienced. This is an easy recommendation. 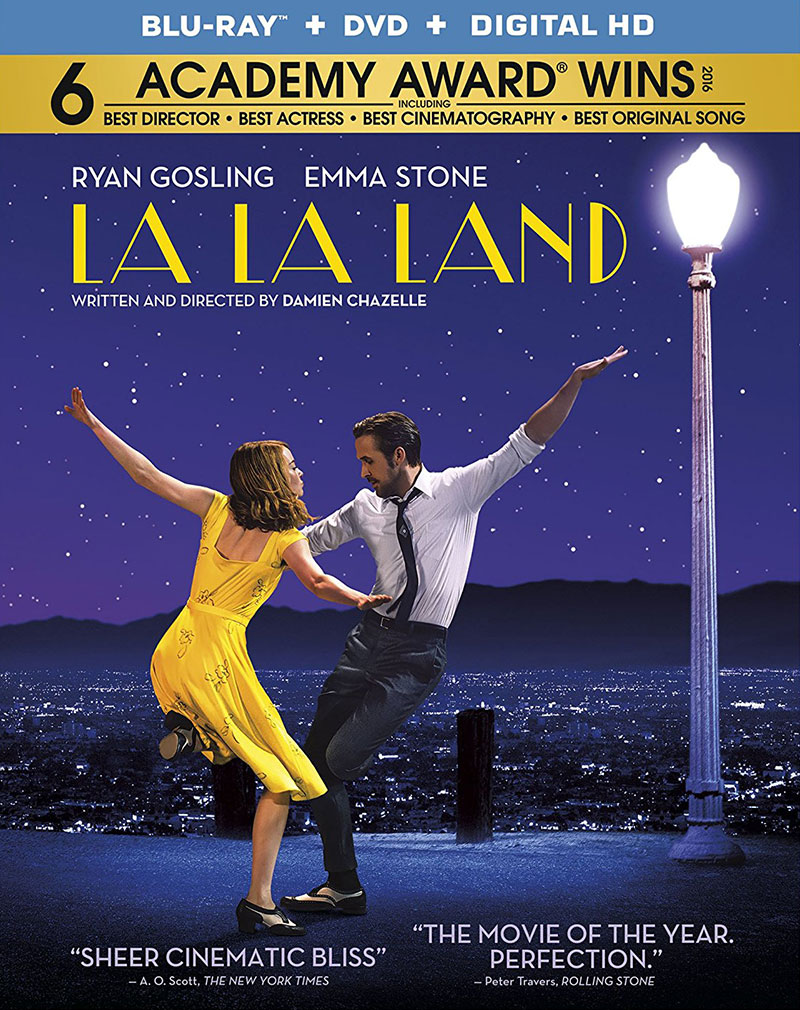