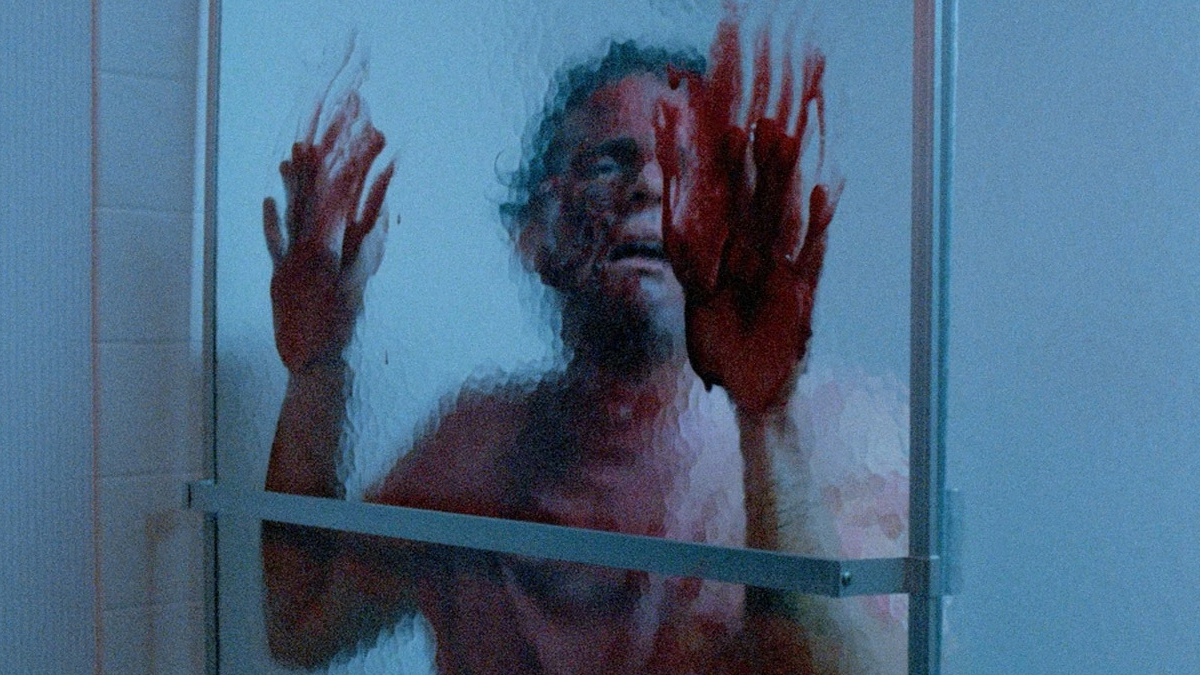 I came of age in the Nineties and early eighties. When Blockbuster Video was still in existence there was a special bin that was basically designed for people who wanted to purchase a film for even cheaper than the cost of renting a new release that evening. These films were typically straight to DVD releases that were in a thin paper casing. There were classic public domain films such as Horror Express and Beat the Devil alongside low budget contemporary movies like Kolobos. I remember that with the horror films that they sold in this fashion, it was a safe bet to buy it for a dollar and then fast forward through half of the film to see if it was interesting or worth writing off as a loss. This is how I came to own a copy of Kolobos on DVD nineteen years ago. I cannot for certain say if I watched the movie or not, but I remember the artwork on the paper slip from when I bought it. Arrow Video decided to rescue the film from relative obscurity with a new Blu-Ray release, so I decided to check it out and see how well it had aged.

The film begins from a first-person point of view. A bloody hand touches a brick wall. The victim continues walking down an alley. Then a car hits them. The drivers of the car get out and assist the victim who says the word, “Kolobos.” The victim is saved by some doctors at a hospital, but has some surgical tape strategically placed around their face. The victim meets a detective named Flowers and a doctor. The victim has another patient in their room that reads out some personal ads. One ad sticks out that mentions an experiment where five people get to stay at a snowy resort if they are willing to be videotaped for the duration of their stay. The film flashes back to show the five video applications of the people who applied to be in the movie: a fast food worker named Tina (Promise Lamarco,) an actress named Erica (Nichole Pelerine,) an academic named Gary (John Fairlie) a stand-up comedian named Tom (Donny Terranova,) and an artist named Kyra (Amy Weber) who is mentally unstable and plagued by visions. When they all assemble in the house, they see that every room in the film has cameras like the show Big Brother. They are starting to settle in and get to know each other. Soon they will be forced to contend with booby traps, metal walls, and a faceless killer, all while on camera.

This film didn’t quite do it for me. I wanted to enjoy it, and at times the film came close to being something up my alley. There is a certain nostalgic side of me that this movie did appeal to, but aside from that, I didn’t have much to grasp onto. Unless you love the bargain bin films of 1999, I don’t know what the appeal is. The script itself didn’t feel like it completely came together for me despite its best intentions. The acting in the film is fun to watch but about what you would expect. The film feels like what it is: a couple film school graduates making a movie on a minor budget. It doesn’t have that great feeling that Evil Dead managed with Sam Raimi working under similar conditions. It just felt a little sloppy to me. In the special features, I was not shocked to see that the filmmakers were forced to add on some padding when the film did not run much longer than an hour. Watching the film, you will probably figure out which scenes were added into the final cut.

One aspect of the film that I did find enjoyable was figuring out from which films the filmmakers were inspired. The soundtrack gave a nod to Suspiria and there is a scene that fans of Lucio Fulci’s Zombie will appreciate. The only other redeeming quality was that I always thought that actress Amy Weber was attractive, and I had not seen her in a movie in a long time.

Fans of the film will certainly be excited to see it come to Blu-ray, but first-time viewers may want to rent this one prior to a purchase or just skip it entirely.

“Kolobos has been exclusively restored by Arrow Films and is presented in its original aspect ratio of 1.85:1 with stereo and 5.1 audio.

The original 35mm camera negative element was scanned in 2K resolution on a Lasergraphics Director at EFilm, Burbank. The film was graded and restored at Dragon DI, Wales. Picture grading was completed on a Pablo Rio system and restoration was completed using PFClean and Revival software.

The original audio mixes were produced by the filmmakers.

This transfer is very grainy. This is largely due to the inexperience of the filmmakers and does not seem to be an issue with Arrow Video. Fine detail is pretty solid and I can not imagine this film looking better if given a 4K scan, but the film itself does not look great on Blu-ray. This is one of those cases where the source material was grainy so you will want to adjust any expectations if you are new to the film. Fans of the film will see it as a huge upgrade due to the correct aspect ratio on this disc and the big uptick in detail. That said, this is not in any way shape or form a cinematographic wonder.

The audio presentation from Arrow provides either stereo or 5.1 mixes. The score borrows from Argento’s Suspiria score by Goblin for the first song of the film. After that the score goes for the normal spiders crawling up webs sounds. The 5.1 track sounds pretty good, I just didn’t find myself overly engrossed in the music of the movie. The score sounds like other low-budget horror scores from that time. Arrow has done a solid job of reproducing the track, it just won’t blow anybody away.

Kolobos did not quite do it for me. The film is just not as tightly written and directed as other films on the label. There is still some fun to be had with the film for those who like the low budget direct-to-video titles of the late Nineties. This disk is going to make fans of the film very happy with solid supplementary materials and solid transfers. My recommendation would be: if you are a fan of the film this is the version to own. The film itself should probably be rented prior to a purchase if you have not seen it.