I’ll admit right off the bat that I didn’t care at all for the original Kingsman: The Secret Service film. I had a few friends speak highly of it, but it did little for me. I’ve only seen it once and that was a good while ago, so I can’t remember why exactly I didn’t like it. One of the things I do remember is how annoyed I was by Samuel L. Jackson and his performance in which he spoke with an irritating lisp. Thankfully, he’s missing from this second outing, save for a brief flashback sequence. Much like this year’s John Wick: Chapter 2, I feel this chapter improves upon the original. That isn’t to say that Kingsman: The Golden Circle is a flawless film, but before we get into that, let’s talk about the plot first.

We begin with a well-staged action sequence in the back of a car between Eggsy Unwin (Teron Egerton) and Charlie Hesketh (Edward Holcroft). Charlie is now something of a semi-robot out for revenge against Eggsy. Charlie’s robotic arm manages to infiltrate the Kingsman computer system and ultimately destroy the Kingsman headquarters. This leaves Eggsy and Merlin (Mark Strong) as the only remaining Kingsman. Eggsy and Merlin then travel to Statesman which is a secret American organization that poses as a Whiskey distillery in Kentucky. While there they encounter a bunch of interesting characters which include turns from Jeff Bridges and Channing Tatum. Admittedly, the two of them take some getting used to. We also have Halle Berry as Ginger Ale and Collin Firth returns as Harry Hart/Galahad who’s having some issues remembering who he is. I haven’t even touched on the character of Poppy Adams played by Julianne Moore. She’s on a secluded island with plans of world domination. Honestly, her whole subplot is more than a little strange. We see her have some poor sap thrown into a meat grinder and turned into a hamburger. Don’t ask. It’s all a bit too gross and silly at the same time. I didn’t even mention that Elton John is stranded on the island as well. Again, don’t ask. Still, it all kind of works in a strange way.

As mentioned earlier, Golden Circle is far from flawless. At 141 minutes, this is just too much film. A lot could’ve been tightened up and made more of an impact. We get a bit too many scenes with Eggsy trying to trigger Hart’s memory to remind him who he really is. A bit less of this would’ve helped. Some of the actors here are having a bit too much fun as well. Still, there are plenty of exciting action sequences and memorable moments to make this chapter worth checking out. I’m all in favor of anotherKingsman film as I feel this is a serious improvement over the first. I just hope next time they keep it shorter and more concise.

The 2.39:1 HEVC transfer leaves very little to the imagination. If ever there was a film that was tailor-made for the Ultra HD format, this has to be it. There’s nothing to really dislike about the way this looks. The colorful (and texture-filled) ensemble worn by Eggsy throughout looks simply amazing in 4K. Detail is second to none and though some of the CGI appear to be just a bit on the soft side – it’s nothing to get worked up over. The included Blu-ray also looks great, but the HDR of this really gives the edge to the 4K version, as expected.

Fans of the Blu-ray might be a bit miffed that the Dolby Atmos mix is missing, but that’s not a huge deal as the DTS HD Master Audio mix sounds just fine. Moving to the Atmos mix, however, well it delivers on pretty much all levels. Atmospheric sounds dominate, LFE are heavy and rich and surrounds are prevalent. Vocals are rich and full as well. Truthfully, there’s nothing here that won’t meet with disapproval. If you’ve ponied up the cash for an Atmos system, you owe it to yourself to have this one on 4K.

It’s too long and maybe has one subplot too many, but Kingsman: The Golden Circle greatly improves on the original film. It just feels more fleshed out and realized than before. There’s a bit too much catching up here, and characters, but more than enough of it works. The action is involving and exciting and the cast all seem to be enjoying themselves. Recommended. 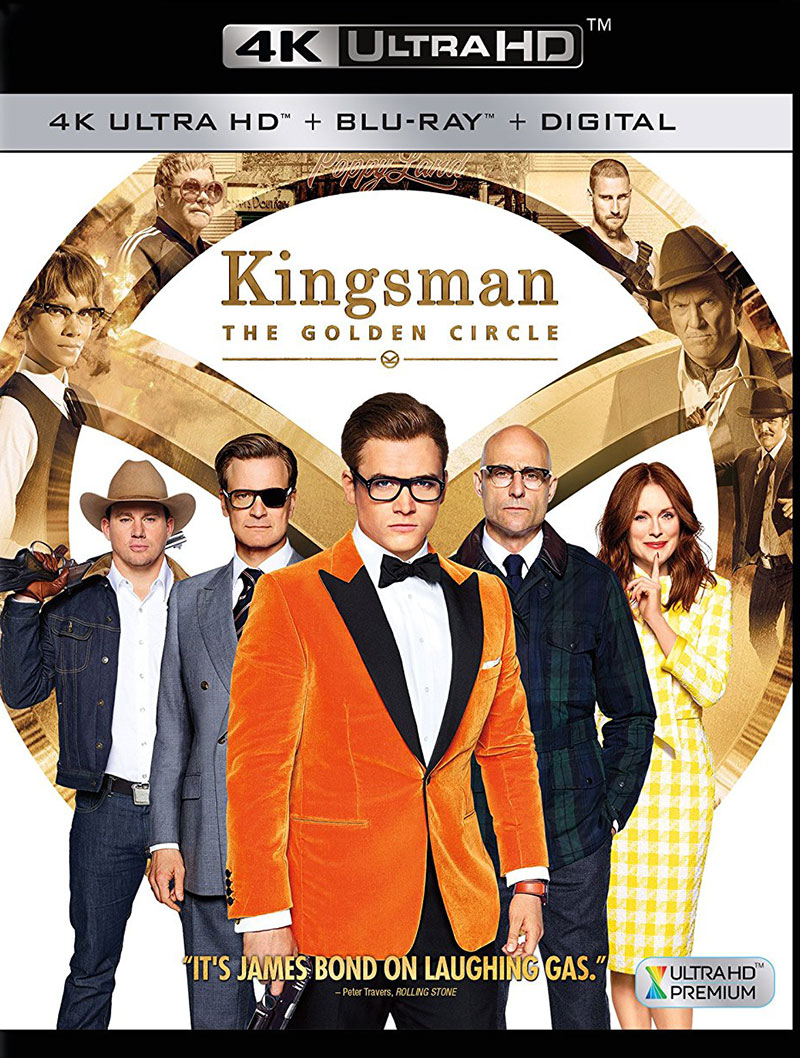