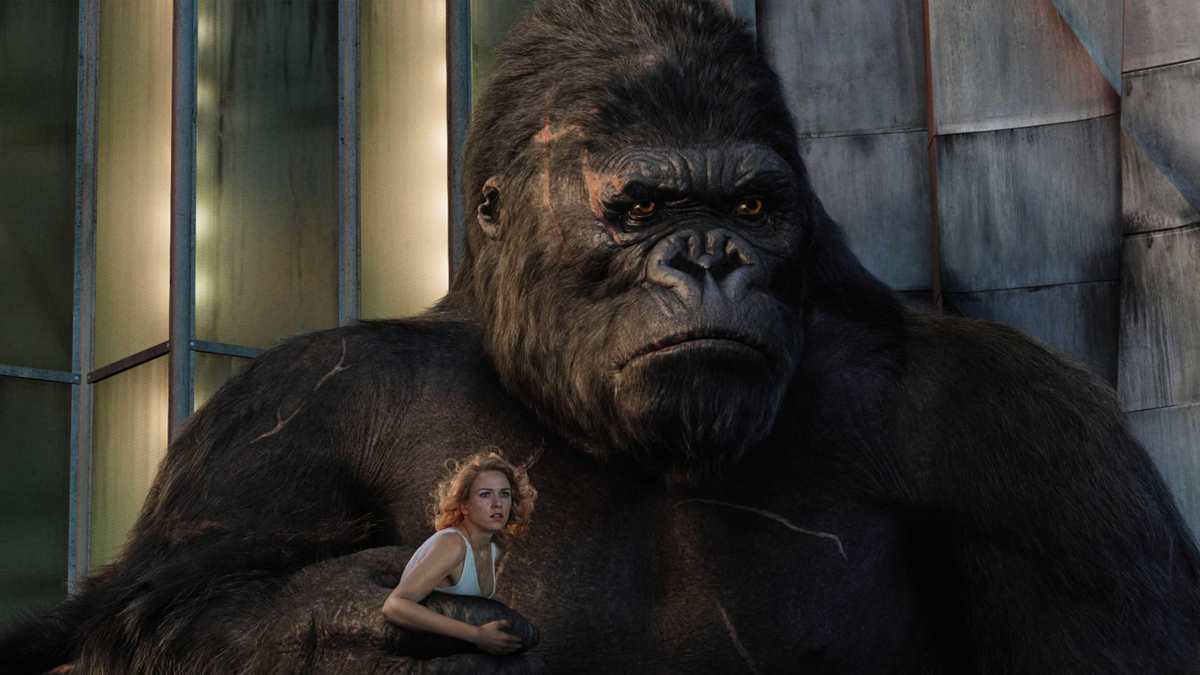 In the mid-90s, director Peter Jackson strived to do an updating of a classic tale that inspired him to go into filmmaking but certain difficulties put the project on hold and made room for the director to display his great vision directing the Lord of the Rings trilogy taking a massive risk filming all three parts consecutively after each other and resulting in many Academy Awards and many appreciative fans at the box office. With this great result came the great responsibility of re-energizing the project of a voyage, an island and an unbelievable discovery to the wonder known as King Kong.

It’s the 1930’s and the nation is in a Depression. Even the actors and actresses scrape up some work, that is until one prominent vaudeville show closes and actress Ann Darrow has nowhere to turn to. At the same time, director Carl Denham (Jack Black) is struggling with studio executives on his latest project and when news is overheard of firing him, he makes a run for it with a chartered ship and his film. Before he sets sail, he encounters Darrow on the street to cast her in a role open thanks to many being unavailable. With this part and the addition of a playwright Darrow admires (Adrien Brody), the course is set but Denham has other plans when an uncharted island comes to his attention and an amazing discovery is made.

With the original being a classic gem, and the seventies having it’s moments (with the exception of the literal taking of the title in the third act), this version is the most cinematic and the most visual in scope of all three. It’s in color, it’s shot wide, and it has development and activities in all three parts. The first takes us to the introduction of characters on land and on the sea. The second takes us to the island of fog and the surroundings of that which pave the way in its developments for the third part which many (but a few) know.

One of the best things Jackson has done with the piece is correcting the error that updating Kong in the seventies and even Godzilla of the late nineties made, which is setting the story in the present. This time around the setting takes Kong back to the period that the original was made along with a few surprises and advances in visuals taken advantage of greatly.

All cast members had itself nicely to this piece with Watts as the pretty actress, Black as the director with a intriguing resemblance both in reptutation and struggle as a young Orson Welles and Brody as the playwright mixed into the mess of things. Additional praise is given in the form of Andy Serkis as he does a great job doing double duty as a crewman and as Kong. One factor that this viewer felt was a positive but one suspects might have kept viewers away from the film is the length. To some, a film slightly over three hours can test the attention span. In the hands of Peter Jackson and his crew, however, a plus is utitlizing the length to the degree that would make it difficult to make something shorter or edit something out. If the Lord of the Rings taught viewers anything, it’s that time in a Peter Jackson film is valuable and used very wisely.

Updating a classic can either be difficult to top or impossible to manage. Somewhere in between, King Kong did something that was impossible at first but is a success. It updates the story in the best possible way without giving in to boneheaded dialogue and missed moments. It also doesn’t become a product of the modern time but it also paves the way again visually for he and his special effects crew. Nothing looked obvious and it’s another fine job indeed by the WETA bunch.

Overall, it’s a big screen movie and a helluva experience from start to finish. King Kong is at the top of the film building and running off a fine execution that rarely cries for a check on the watch.

This version has seen a few incarnations on various formats and with the release of Kong: Skull Island, the leap to Ultra HD/4K was a foregone conclusion. It’s been several years since we last saw our large, furry friend and in that time Universal has given the film a new 2K scan that translates pretty well to Ultra HD. The 2.39:1 HEVC image runs the gamut in terms of color and clarity. CGI appears natural, but doesn’t scream “special effect” while the overall mood and tone is dark, the image is never really challenged in the least. With recent films including visual effects, there are some side effects left on the look of the picture but not this one. All colors have a nice balance and even in the darker scenes the look of the film remains constant without being obvious to the cry that “It’s a visual effect!” It’s by far the best the film has ever looked and given that there are two cuts on the disc, it really looks amazing.

An upgraded DTS X track captures every effect and every musical cue in every channel dividing greatly amongst the surround channels and balancing the dialogue and effects very nicely with the score and effects taking up the majority of the outer channels. And when there is a roar or a thud, prepare to be jumping out of your seats with the volume up and hanging by your fingernails on your couch, sofa or favorite seat. Even the orchestra in the third part can get anyone popping up. A very nice job audibly indeed.

Universal released a Blu-ray and this is essentially the same thing as that, with the addition of an Ultra HD disc. All of the supplements remain intact. Of note, there are some very substantial production diaries that we took a look at a long time ago. We didn’t list them below, but suffice it to say – they’ll take the better part of a day to watch. Have fun.

Disc Three – The remainder of the supplements occupy this disc.

The 2005 version of King Kong has stood the test of time (over a decade as of this writing) and though it might not be looked upon as fondly as its 1933 film, this disc really has “bang for the buck” value. There’s over a dozen hours of supplemental material as well as reference-quality audio and video. The only addition that this has over its Blu-ray counterpart is the Ultra HD version of the film which does look and sound better. But if it’s supplements you want, either version will quench your thirst.