At the beginning of the eighties, Martin Scorsese was riding high after his critical and commercial success with Raging Bull. Three years later, at the insistance of his occasional co-star Robert DeNiro, Scorsese would return behind the camera to tell a story about fame, fortune, and how far someone will go to have a spot on a late night talk show, even if they resorted to possible homicidal tendencies. May I call upon you the viewers to witness the crowning of The King of Comedy.

Rupert Pupkin (Robert DeNiro) is a wanna-be comedian who worships the ground Jerry Langford (Jerry Lewis) walks on. He has all his records. He even has cardboard cutouts of Jerry, his guests and the audience in his apartment. He imagines himself as a guest on Jerry’s show. One night he plants himself, amongst the fan ridden crowd, into Jerry’s car to pitch about his appearance on his show. Jerry shrugs it off as a fan’s fantasy and doesn’t think much of it seriously. After that chance meeting, Rupert goes to his office and is met with a lot of waiting and a lot of vague answers that lead to rejection. At the same time, Masha (Sandra Bernhard) is following Jerry around for a different reason. With no place else to go and no other options, Masha and Rupert team together to take matters into their own hands with the one host they obsess over to settle their differences whichever they may be which can lead to consequences or confidence.

Not a box office hit in 1983, The King of Comedy is one of the most underrated Scorsese films. It has the word “comedy” in it’s title and there are some chuckles in it occasionally, but it is comedy of a dark kind and the picture is more of a character driven piece that for audiences at that time is always a hard sell. It is those kinds of films that many more years down the line get praised more so then when it was first released as was the case for many other movies of the early eighties.

As Rupert, Robert DeNiro brings a sense of the loner with a personality along with a sense of desperation and dertermination to do whatever it takes to make it onto Jerry’s show. He becomes a lost soul in his own world wanting to make it a reality so bad that he’ll do anything including passing the point of no return. It is a wonderful performance that is still one of the great overlooked performances of the last two decades. The same can be said for Jerry Lewis and Sandra Bernhard. Even though Jerry has admitted that the performance was more him being himself than not, he brings a more serious side Lewis fans aren’t used to seeing him in and it’s that unexpected dramatic flair along with reflecting of his own career playing himself that brings credibility to a role that was offered to many (Johnny Carson, Sammy Davis, Jr. , Dean Martin) before getting to him. Bernhard’s Masha is obsessed with Jerry and feels a connection with Jerry, yet everytime she wants to express her feelings for Jerry, they’re met with unfortunate circumstances.

With all that, plus a great script with plenty of quotable dialogue (which soundbites gets used many times on a popular morning radio talk show grabbing many headlines lately) and the direction of Scorsese showing that less is more, The King of Comedy may not be one of the funniest movies ever, but it is one of the finest films Scorsese has made in his entire career proving that it’s better to be king for a day than a schmuck for a lifetime.

The film, now more than three decades old, has seen just about every home video format imaginable. From VHS to LaserDisc to DVD and now finally on Blu-ray.  The 1.85:1 AVC HD encoded transfer shows a lot of improvement over the previous standard DVD issue. That said, the image does appear to be a bit on the softer side for the majority of the movie. It’s not totally distracting, but it’s a noticeable softness compared to the crystal clear/razor sharp images of today’s modern films.  There are several intentional “TV” shots in the film so those look downright awful by comparison, but then again it was the intent of Scorsese.

While The King of Comedy isn’t exactly an audio powerhouse, the new DTS HD Master Audio mono track does have a few moments, even with a single channel to boot.  Consider some of Woody Allen’s movies, most of which are in mono. You don’t need to shake the room to get the point across (though it is a lot more fun). Vocals are sharp and crisp, I heard the slightest bit of distortion in some of the outdoor scenes, but nothing too major.

The standard DVD of this movie came with a few supplements, but Fox has added one in particular that might make picking this up a very good idea indeed. 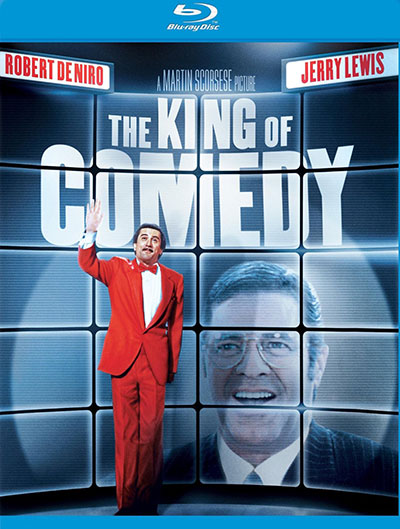