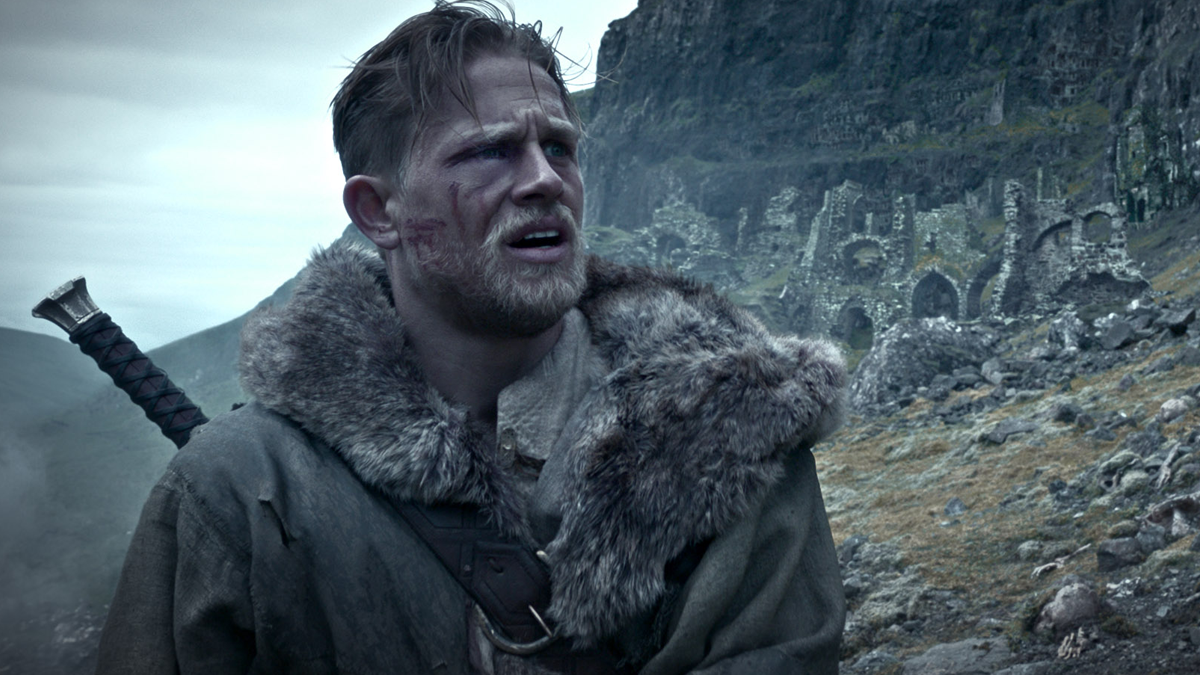 There are some tough jobs out there and I’m willing to bet that one of the most desirable yet deplorable must be that of a Hollywood director. Why? Well your work is in the public eye, so if you get it right then you’re hailed. And if you get it wrong, which happens more often than not, you’re chastised. So, when you look at a director like Guy Ritchie, it’s hard to tell if he’ll knock it out of the park or fall flat. Ritchie, of course, has brought us gems like Snatch, Lock, Stock and Two Smoking Barrels as well as the new Sherlock Holmes films. Certainly, if he was able to take a tired and told tale of Sherlock Holmes then tackling the legend of King Arthur was also in his wheelhouse? Let’s find out.

The stage is set with a misleading pre-credits sequence that sets the stage for the film. Vortigern (Jude Law) murders his brother, King Uther (Eric Bana) and thereby seizes the crown. Uther manages, however, to send his young son to safety before this occurs. We flash forward two decades later and witness the now grown Arthur (Charlie Hunnam) who has no idea of his royal heritage. It’s only after he’s able to pull a long, mythical sword from a stone (Excalibur, of course) that it becomes apparent that he’s something and someone special. He joins the resistance against Vortigern and receives some much-needed help from Guinevere (Astrid Berges-Frisbey). And as we can deduce, he sets out to reclaim his birthright from his uncle who robbed him of it.

I’ll go on the assumption that anyone reading this knows at least something about King Arthur and the legend of Excalibur. If not, this isn’t the best place to start as Ritchie and company take some pretty serious liberties with this tried and true tale. Look for dizzying camera moves, odd angles, slow-motion fight scenes and anything else that will make your head spin. Hey, it’s a Guy Ritchie movie – what do you expect? And yes, thrown in for good measure are some enormous elephants that destroy everything they see, gravity-defying fights (which, if done right, can be pretty cool – see Crouching Tiger, Hidden Dragon) and everything else. It’s actually not worthy of all the hate that this film got and if you take it for what it’s worth, it’s not bad.

The film has come to the Ultra HD format looking spot on and there’s nary a thing to complain about. Again I reference the director and if you’ve seen his previous films, you’ll have an idea as what to expect. For a movie with such grand scale, it’s quite a sight to behold (pun fully intended) with the 2.40:1 HEVC 4K image looking like it could leap off the screen into your living room. Grandiose battle scenes mesh well with some of the more “normal” scenes. Detail is off the charts, the color palette is muted intentionally and looks just fine. We get a little more depth and color rendition due to the HDR, but if none of that wows you then save a few bucks and go for the Blu-ray version (also included).

Warner is one of those studios that “does it right” with their new releases. Both the Blu-ray and Ultra HD contain the exact same Dolby Atmos mix, so the good news is that whatever version you choose – you won’t be cheated out of some good audio. And there’s a lot to like when it comes to this track, not only the atmospheric sounds that never seem to end, but Daniel Pemberton’s score is downright amazing! This one is off the charts folks, I can go on and on about it, but suffice it to say that if it’s dynamic audio you want, you came to the right place.

The Ultra HD version contains no extras, so all of these are found on the included Blu-ray.

It’s easy to hate on a movie like this. But if you can lower your expectations and just accept that you’re in for a good, two hour ride – it’s really not that bad. Ok, maybe this shouldn’t replace a “history” lesson, but it excels in entertainment. What’s the point of having thousands of dollars in an entertainment system if you can’t crank it up and have a little fun now and then?