I love Brad Pitt.  I mean really, who doesn’t?  It was said that in his prime, Tom Cruise had both equal appeal to men and women which is why his movies were (and to a lesser extent, still are) so successful.  I’d say the torch has officially been passed to Brad Pitt and even though he’s approaching 50 years old, I think there’s plenty of women who’d give him the time of day, don’t you?  Unlike Cruise, Pitt has taken a few more risks in his career with some rather offbeat and notable roles in smaller films like Snatch and now with Killing them Softly.  I remember first seeing Pitt in Ridley Scott’s excellent Thelma & Louise, which still ranks right up there with some of my favorite films.  With all of his critical and commercial success, it’s given him the freedom and flexibility to work on projects that he wants to do and it shows.  Last year’s Moneyball I felt he was at his best.  But going from baseball General Manager to a hitman for hire is a big step…did he pull it off?

Loosely based on the 1974 novel “Cogan’s Trade”, Killing them Softly is set against the backdrop of the 2008 Presidential election.  I never really figured out why, but I guess director Andrew Dominik was out to prove a point of some sort.  We meet two low level thugs (Scoot McNairy and Ben Mendelsohn) who decide to knock over a card game populated by members of the local mafia.  Not a bad idea, only the proprietor of the game, Markie Trattman (Ray Liotta) had the same idea a few years earlier. He got away with it then, but should it happen again – the result wouldn’t be the same.  With things in disarray, Jackie (Brad Pitt) is called in to clean things up, but after realizing that he knows one of the “victims” enlists the help of an old friend, Mickey (James Gandolfini) to help him out. The economy is in the toilet, the White House is up for grabs and even a hit man is feeling the effects of a bad economy.  What’s a guy to do?

This isn’t your marquee Brad Pitt movie, that’s for sure. In fact, most people didn’t even hear about it until it came to Blu-ray.  Again, this is what I like about Brad Pitt in that not everything he does has to have him front and center with a $100 million dollar budget to his credit.  This is a gritty crime movie in the vein of Reservoir Dogs.  In fact I can only imagine how this movie would have been had Quentin Tarantino been behind the camera (and with Pitt’s past collaboration with him in Inglorious Basterds, it could have happened).  It’s not an easy movie to watch if you’ve a weak stomach and let’s just say the dialogue is a bit on the rough side as well.  Still, the cast does a good job and even if Andrew Dominik does tend to get carried away with his own “vision” at times, it’s still an interesting watch.  Recommended.

As gritty crime films go, Killing them Softly certainly fits the bill in regard to video quality.  The 2.40:1 AVC HD image looks pristine as they come and Director Andrew Dominik certainly has a flare for some rather interesting and obscure imagery.  If you’ve ever wanted to see a bullet leave the chamber of a gun and enter (and exit) someone’s head in super, super slow motion – well this is what you’ve been clamoring for.  All things considered, the entire movie is a bit on the darker side, with detail looking excellent and showing us that even men like Brad Pitt and Ray Liotta do, in fact, age.  Contrast and black levels work well off one another as well.  This is a more visually ambitious movie than I was prepared for and I think it’s a little over done in places, but this Blu-ray is just about perfect.

The included DTS HD Master Audio soundtrack is surprisingly good as well.  We’re treated to a few (perhaps a few too many) speeches by Barack Obama and George H.W. Bush, but they’re always clear in the background.  Dialogue is sharp and crisp even if some of the lead actors tend to mumble their lines from time to time.  Surrounds are used fairly often and with great effectiveness as well.  If you’ve never heard the “BANG” of a shotgun in person, this is about the next best thing to being there.  There’s a “drug trip” scene that offers up some great ambiance as well.  Not a bad little mix here.

We don’t really get a lot of extras here with four deleted scenes and a short making of featurette which tells us everything that every other short “making of” featurette tells us. 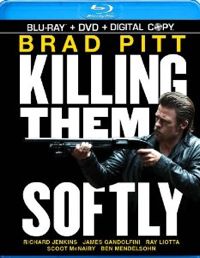