The Killing of a Sacred Deer (Blu-ray) 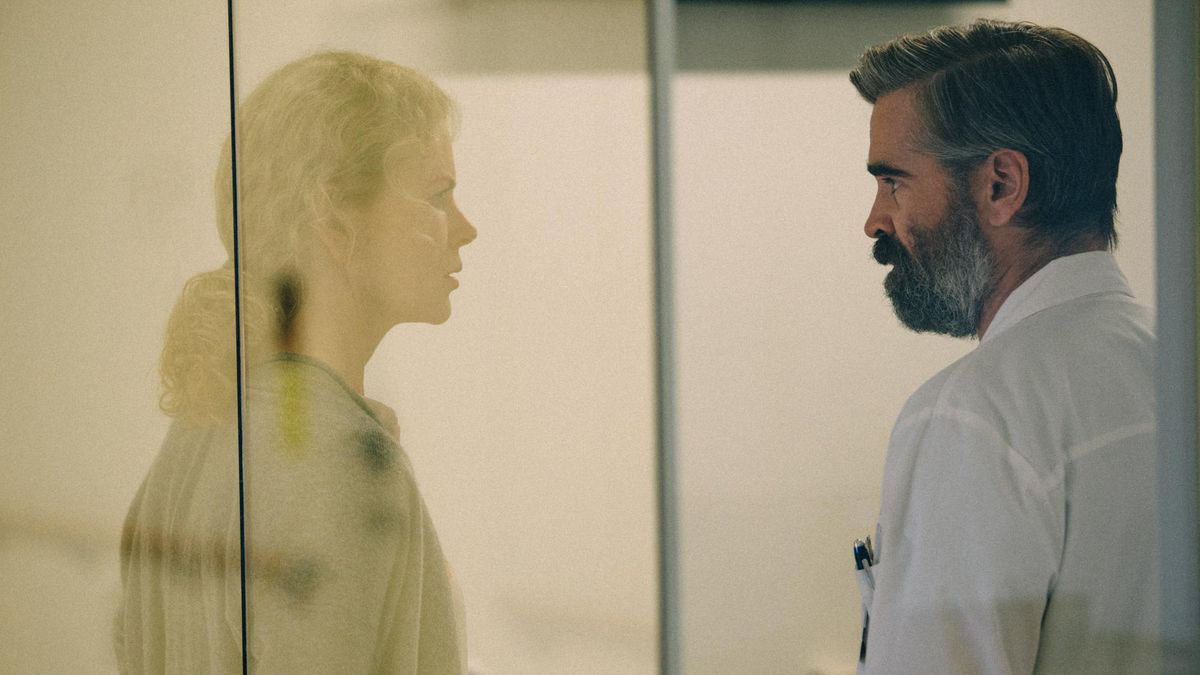 Sitting in a hotel room in Miami, my wife and I were scrolling through the On Demand feature trying to decide what to watch. She’s accustomed to the amount of movies that I get and watch, so I think she was in the mood for something different. After perusing several trailers, she said “Ok, let’s watch this.” My response was “Are you going to stay up for the entire thing?” She nodded*. It’s odd that the film in question was The Killing of a Sacred Deer and I was actually a bit miffed at myself as I’d missed this. I was a huge fan of director Yorgos Lanthimos’ previous film, The Lobster. It might help to watch that one first just to get a sense of his style. Having said all that, this is a strange film and it’ll be difficult to divulge the plot without giving away certain points. I’d read this at your own risk as what I might not consider significant, others may. At any rate, it’s about to get weird, folks. Weird indeed.

Dr. Steven Murphy (Colin Farrell), a Cardiologist, is a matter-of-fact man with a seemingly simple life. His wife Anna (Nicole Kidman), an Ophthalmologist, stays at home caring for their two children: Kim (Raffey Cassidy) and Bob (Suny Suljic). For reasons unknown to us, Steven seems to have taken a young boy, Martin (Barry Keoghan). A teenager of unknown connection to Steven, Martin’s preferred method of interaction is an unwavering quiet intensity whose put-on politeness and sideways smiles do little to hide the underlying threat. Martin has figured out that it was Steven’s incompetence that led to his father’s death a few years earlier. Without giving too much away, Martin will now force Steven to choose (in Sophie’s Choice fashion) to make things right.

Nobody does tragedy like the Greeks and it’s only fitting that Yorgos Lanthimos wrote and directed this film. If you’re looking for an antecedent, it’s not that difficult to piece things together. Based on a Greek myth that centers on the killing of a sacred deer by Greek leader Agamemnon. Artemis, the goddess of the hunt, punished Agamemnon, and the only way to remove the punishment is for the leader to sacrifice his daughter, Iphigenia. While it’s not an exact parallel, that coupled with the aforementioned Sophie’s Choice reference should spell it out. Farrell and Kidman anchor the movie along with the eerie Barry Keoghan (who can also be seen in Dunkirk). If you’re in the mood for something different, this will fit the bill.

*She fell asleep 30 minutes in.

This one won’t showcase a rainbow of colors and have bright, sunny days to lighten the mood. No, the film relies on slow, panning wide angle shots that creep along at a snail’s pace. The film, presented in a 1.85:1 AVC HD image, does look pretty good, but like The Lobster, there seems to be a very “homemade” quality about this one. Farrell’s beard is so thick, it’s hard to even make out his lips. Black levels are spot on and strong and the lack of any artifacts is a relief, but one look at this and it screams “independent film.” That’s ok, though. The included transfer should please fans, while presenting the film in a very odd way indeed.

If ever there was a film that revolves around the spoken word, it’s this one. The movie isn’t made to showcase the limits of your system, though there are plenty of others out there that are. Getting used to the way the characters speak takes a bit of time, but once you accept that’s how the film will be – it works. Surrounds are used sparingly, mainly for some rather odd sounds and some really eerie music. This doesn’t sound bad by any means, but it’s best to realize that prior to the opening credits.

Ponder it all you like – it probably won’t make much more sense no matter how much thought you put into it. It’s one of those movies that doesn’t rely on (or need) explanations for everything that happens. But, like so many of my favorite films, it makes you think and stays with you long after the credits roll. Colin Farrell turns in another great performance as does Kidman who was also great in The Beguiled. The lack of any other supplemental material is a bit disappointing, but the movie both looks and sounds good and should please fans.