Sister Gertrude (Anita Ekberg) is not doing well, as she has locked up twice in crucial moments in medical procedures. In one case, a patient was gasping inside of an oxygen tent, but Gertrude couldn’t move to help, though a doctor arrived in time. She complains of intense headaches and shaky vision, not to mention frequent blackouts and unexplainable instances in which she loses control of her basic motor functions. Although she pleads to be treated, or at least be given some morphine, she is denied. Instead of treatment, she is told that her problems are not real and just inside of her head, so she should move on. But as time passes, she becomes more and more on edge and her episodes begin to happen more and more often. When a patient puts her dentures into a glass of water at a table, Gertrude goes berserk and can’t be controlled. She is then dispatched to a patient in need of instant attention, as she is having a heart attack. Gertrude would be able to save the woman’s life, but she freezes up and as a result, the patient dies. She then loots the dead woman’s valuables and heads into town, in order to ease her mind. That involves fencing a diamond ring that she took from the dead woman, having sex with a stranger, getting drunk, and buying morphine, which she then hides back at the residence. As more people begin to turn up dead, all eyes are on Gertrude, but is she behind the brutal killings?

An entire wing of exploitation cinema is devoted to those wonderful nuns, the authority figures we love to hate. The real nuns can be wicked, despite their holy appearance, with rulers, stern words, and strict discipline. But the nuns in the realm of “nunsploitation” are much crueler, without the boundaries of religion to hold them back. The habits are the same, but these nuns don’t follow the example of wholesome Mother Superiors, instead these women murder, torture, and yes, even engage in lurid lesbian sex. Killer Nun has one of the worst nuns of all, as Sister Gertrude smokes, drinks, uses morphine as recreation, and is addicted to dirty, kinky sex, with whomever she can hook up with. Of course, this is sure to offend almost anyone outside of exploitation, but anyone else who rents a movie titled Killer Nun deserves the heart attack. Anita Ekberg has the main role here and she is brutal, but so is her performance. She’s over the top beyond belief and while humorous, that does detract a tad from the film’s dark tone. The depressing mood is well crafted, though of course, few folks will appreciate that aspect. If you want the blood and breasts, Killer Nun has them in ample portions, thanks to this new uncut version. Blue Underground’s Blu-ray presentation is allowed passage into heaven, as Killer Nun is well recommended

Killer Nun is presented in 1.85:1 widescreen. This treatment was taken from the original negative and remastered, so it looks terrific. Blue Underground’s DVD release looked good, but this ups the ante. The image is clean and retains the inherent grain, which ensures the film-like texture is intact. The clarity is quite good as well, so fine detail is impressive here. I don’t think anyone will mistake this for a brand new movie of course, but given the age and source, this is a great treatment that fans should fall in love with.

A new lossless DTS soundtrack is provided, but the movie simply doesn’t have a dynamic audio presence. I found the audio to be clearer and improved overall in this edition, but don’t expect miracles. The music is the most active element and it sounds good. While the power isn’t going to blow you away, the movie sounds clear and clean, which is excellent news. I am always thrilled to see films like Killer Nun given this kind of extra attention. You can choose between English and Italian language tracks, as well as subtitles in English, Spanish, and French. 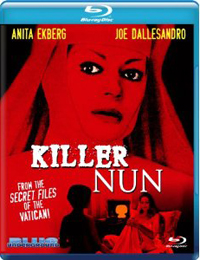