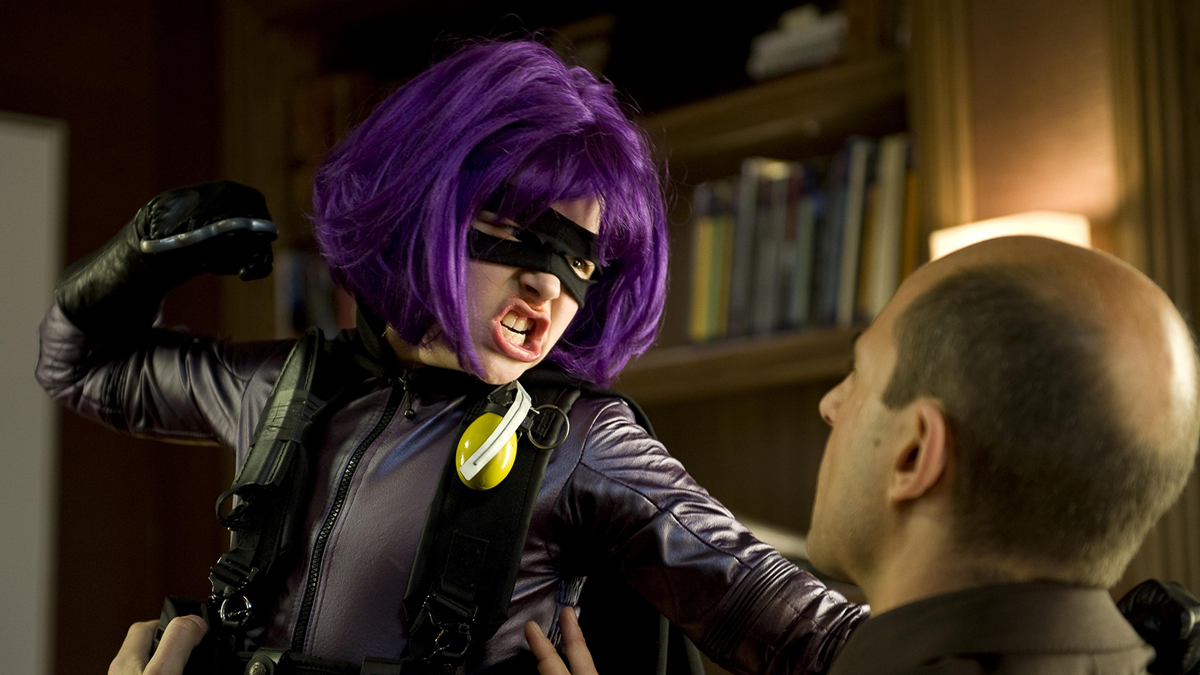 At the most basic level, you could probably break down the movie-going public into two categories: those who will find humor in a twelve-year-old girl gleefully dismembering and/or murdering bad guys while nonchalantly spewing out “the c word” and those who will not.  Your enjoyment of Kick-Ass as a film, make no mistake, will depend greatly upon which of these two camps you personally fall into.  The more conservative or easily shocked amongst you simply need not apply.  The good news is that, at least now that Kick-Ass is comfortably at home on Blu-ray and no longer in theaters, most of those people are far less likely to mistakenly see the film and come away scarred for life.  As for the rest of you, sit down and enjoy – you’re in for one hell of a good time.  Kick-Ass is brutal, relentless, unabashed fun.  It doesn’t care who it offends or what lines it has to cross to stay true to its tone, bucking conventions as flagrantly as most films adhere to them.  And why shouldn’t it?  Its comic book origins are reportedly even more in-you-face offensive and insensitive, lending the film adaptation a certain “buyer beware” feel, as if those too lazy to educate themselves on the books this film draws inspiration from deserve everything their ignorance earns them for 117 minutes.

The film follows the improbable (if initially hyper-realistic) exploits of Dave Lizewski (played by Aaron Johnson), a high-school outcast who gets it in his head one day to become the world’s first actual superhero.  His first attempts at this lead to some hilarious (and somewhat disturbing) results.  Adopting the title of Kick-Ass, Dave is stabbed, beaten, hit by a car, and left for dead before he finds his feet as a hard-as-nails vigilante, and that’s just in the first act.  When things really pick up is when he meets some actual heroes – Big Daddy and Hit Girl – who’ve been doing the superhero thing under the radar for quite some time.  Big Daddy is played by an absolutely inspired Nicholas Cage, who gives one of the funniest performances of his career as the Adam West-wannabe Batman clone.  His inflection and delivery is pure gold for those familiar with the camp of the 1960’s television series, and I laughed more than once at the dead-on impression.  But the real revelation in Kick-Ass is, of course Chloe Grace Moretz as Hit Girl.  She’s an over-the-top, no-nonsense, devastatingly brutal assassin, always given the upper hand by being underestimated by her hapless targets.  She’d rather get a switchblade than a doll for her birthday, and she’s got no issues taking a slug in the chest for fun just to toughen herself up.

There are hysterical subplots in Kick-Ass too numerous to count (including Dave attempting to get closer to his high-school crush by faking his sexual orientation, the son of the big baddie trying to infiltrate Kick-Ass’s group of heroes by concocting a positively preposterous alter-ego for himself called Red Mist, and a villain inexplicably obsessed with the color orange who has more quirks than Butters on South Park), but the glue that holds the film together is inarguably the chemistry between Kick-Ass, Big Daddy and Hit Girl.  Everyone was clearly having a blast shooting every frame of this film, and that energy is infectious while watching it.  By the time Hit Girl rampages down a hallway during the film’s climax, severing limbs and contorting herself into implausible fighting positions, we’re so invested in the characters and the story that we forget how ridiculous and offensive it all probably objectively is.  The film deftly progresses with an intentional and brilliant pace from the realism of the first act, the amped stakes of the second, and absolutely ludicrous, gory extremes of the last.  It’s a fun, fast, and wild ride that’s as unconcerned with justifying itself as it is with holding back.  For those willing to check their conscience (and maybe even a bit of their morality) at the door, Kick-Ass, well…kicks ass.

Lionsgate seems to be arbitrarily (or maybe not so arbitrarily) going through their catalog and bringing out titles in the 4K format. Why this one got the call is beyond me, but I won’t question it. And while I’ve never been a very big fan of the current trend to oversaturate films and jack up contrast levels to extremes, but if there was one film for which I think both techniques are wholly appropriate, it would have to be this one.  This is truly written, performed and executed as a comic book world come to life, and as such, the stylistic choices actually serve the subject matter quite well.  Colors, as said, do teeter on the edge of becoming overly saturated at times, blurring the line between intent and technical imperfection.  On the other hand, fine object detail here is generally fabulous, lending the film a near-3D feel, especially in the more well-lit scenes.  The increased color depth from the HDR really works well here and factoring in my personal distaste for this style of filmmaking, I’d have to say that it just…works.

Another benefit of having this on Ultra HD is the addition of a Dolby Atmos sound mix. Granted, the DTS HD Master Audio track on the Blu-ray was nothing to scoff at, but If I had to characterize the mix with a single adjective it would be “bombastic”.  Ordinarily, that might be a negative for me, as I’m generally more impressed with the more subtle and nuanced lossless tracks (I still contend that where lossless shines brightest is in conveying a sense of true space through well-executed ambience), but this case, it’s meant as a compliment.  The big moments in this film need to feel big, loud and in-your-face to have the intended effect.  Quieter scenes are a bit more front-heavy than I like to hear on the absolute best soundtracks out there, but once the action picks up, all is forgotten rather quickly.  Perhaps this isn’t quite reference-quality, but it’s aggressive, powerful and serves the film very well once it gets going and hits its sweet spot.

All of the supplements from the Blu-ray are there, they’re just on the Blu-ray disc (also included).

For all the comic book movies out there, this is an “anti” comic book movie…of sorts. While true to its origins, it’s hard-edged and as in your face as you can get. The glorified violence adds to the movie and takes no prisoners. It’s a hard-hitting film that’s only grown on me in the years since I first saw it. The 4K version adds a bit more pizazz to the picture and the new Dolby Atmos mix, well, kicks ass.