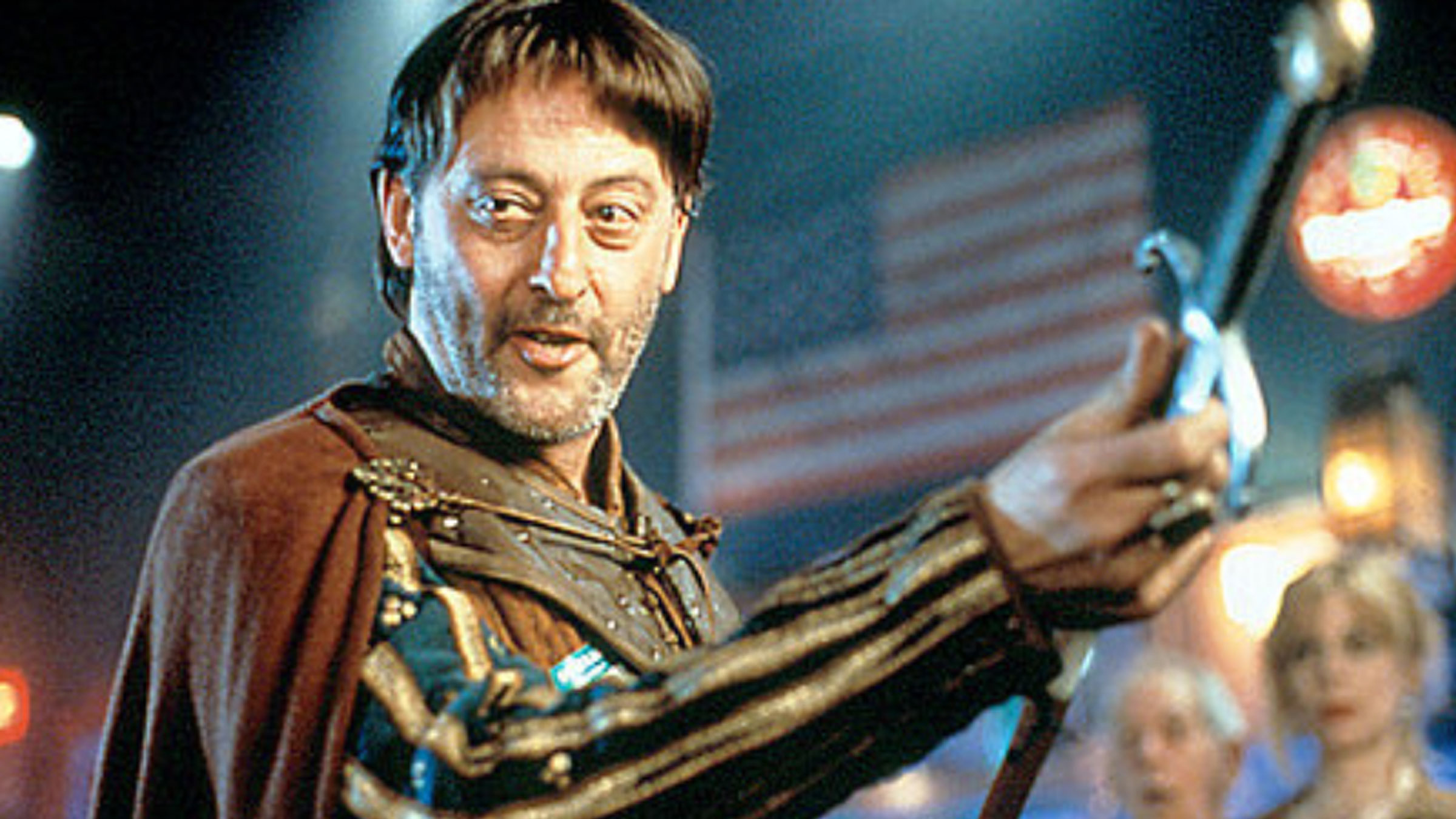 Count Thibault (Jean Reno), his family, his guard, and his servant Andre (Christian Clavier) are en route to a majestic castle, where Thibault’s bride to be awaits. He is to wed the beautiful Princess Rosalind (Christina Applegate) and together, they will rule all the lands that surround them. But when a jealous rival and an old witch poison his drink, he has horrific visions and thinks Rosalind is a demon, so he runs her through. Of course, he is heartbroken and doomed to be punished, but Andre locates a wizard, who promises to send them back in time, to prevent the tragic event. A slip in the spell however, and Thibault and Andre are whisked into the future, where they have no idea what awaits them around each corner. They soon meet Julia (also Applegate), whom they first believe to Rosalind, but later learn she is a descendant of Thibaults. Now with her help, they must only not only learn how to survive in this complex world, but also figure out some way to return to their own time, to stop Rosalind’s tragic death…

I had my doubts about Just Visiting, as it is the English remake of the 1993 French film Les Visiteurs, but I still figured it was worth a shot. In the end, the basic nature of the original is passed on, thanks to a number of returning key players, on both sides of the camera. In addition to the presence of Jean Reno and Christian Clavier in their previous roles, director Jean-Marie Poire takes the helm, all of which keeps this one in line. A number of the same jokes are back and little is different, but this one has some unique elements, so no fears there. If you’ve Les Visiteurs and enjoyed it, then I recommend Just Visiting, if just to see the characters in additional humorous situations. Reno, Clavier, and Christina Applegate are all in fine form, with Malcolm McDowell in a small, but memorable role as well. I found this to be a fun and very amusing picture, so if you’re interested, by all means, give it a whirl.

I hold Jean Reno to be one of my personal favorite performers, so of course, I was pleased to him reprise his role in this picture. I think American audiences know him best from his more serious roles, including more than a few turns in the films of Luc Besson, but Reno’s resume is loaded with varied material. In this case, he is called upon to perform slapstick comedy and hilarious verbal wit, but he never falters so much as an inch. Of course, he has played this role a couple of times before, but even so, Reno makes it seems fresh here, which is impressive, I think. You can also see Reno in such films as Leon: The Professional, The Crimson Rivers, Mission: Impossible, French Kiss, and Le Dernier Combat. The cast also includes Christian Clavier (This Sweet Sickness, Les Visiteurs), Christina Applegate (The Big Hit, Mafia!), Bridgette Wilson (Love Stinks, House on Haunted Hill), and Tara Reid (Josie & The Pussycats, American Pie).

I say this often, but it’s been a while since I last sat down and watched this movie. A long while. Originally released by Mill Creek a few years back, this new Kino disc sports a new transfer (and even a new supplement, more on that below) that breathes new life into this relatively obscure film. Colors are brighter, detail has been improved and the film has some more sheen to it. In short, it looks as good as it ever has. Kudos to Kino for doing this one right.

The DTS HD Master Audio mix is certainly nothing to write home about (get it?), but I found it a modest improvement over the previously-released Dolby Digital 5.1 mix. The rear channels are abuzz with activity and all sorts of offbeat stuff. I mean puh-lice, this is outrageous, brothers. I found no distortion present and no real cause for concern, this is one terrific audio track.

The phrase “guilty pleasure” comes to mind while watching this film. It’s fun. And I’d forgotten how good the cast was. It won’t change your world, but it’ll serve as an 88 minute distraction from yours – and sometimes that’s all you need. The improved picture as well as the new commentary make this one a no brainer for fans.