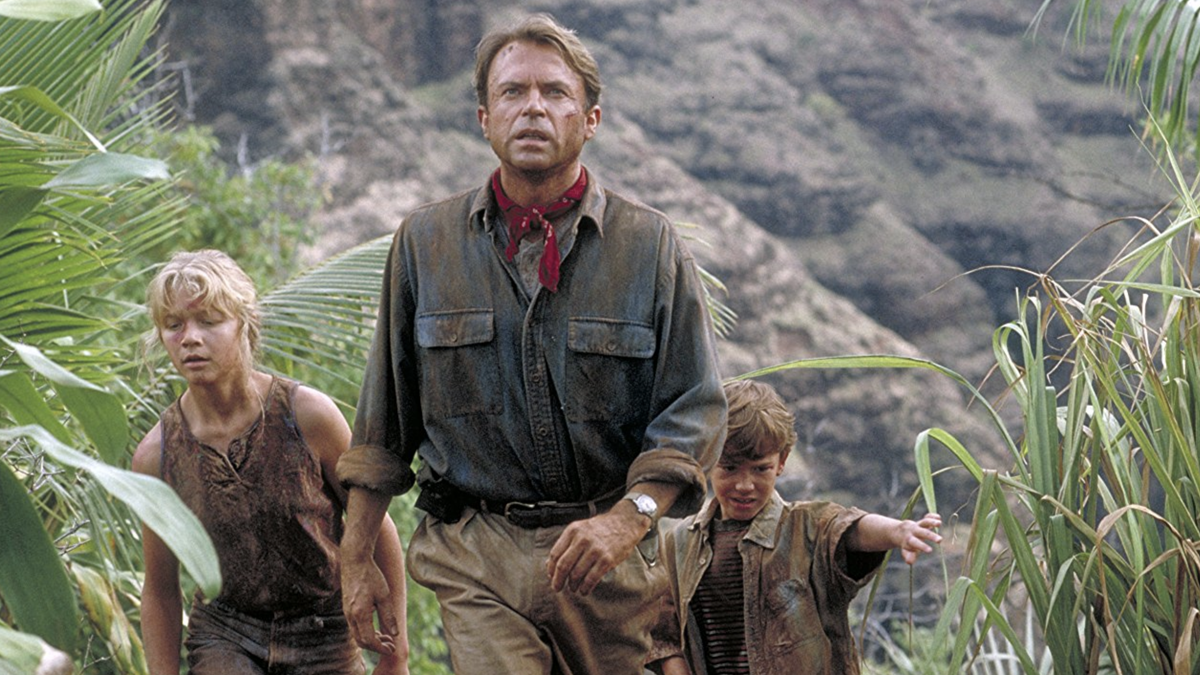 An adventure 65 million years in the making.

The advent of home theater has allowed for some of the most widely accepted films to be seen and heard in our homes with a quality that is second only to going to the theater.  It also seems that the titles themselves are making their way as special editions, too. It’s hard to believe, but it’s been two full decades since Spielberg’s dinosaurs gave us a thrill all to the tune of box-office gold. Stephen Spielberg, master of the movies, both big and small showed us that he could make us laugh, cry and scare the living hell out of us as well. With Jurassic Park being one of the main event movies of the Summer of 1993. Of course, I was one of those people who thought the movie was for kids, so I went and saw Last Action Hero, and we all know who eventually won out between those two. What better way to commemorate one of the biggest movies of all-time than by releasing it in a new format?  Who said movies were about entertainment, c’mon – it’s all about the money!

If you’re one of the few, and I mean the very few, that hasn’t seen this film then you’re in for a treat. On the remote island of Isla Nublar, a new park has been developed that features genetically-engineered dinosaurs as the main attraction. The park’s founder, John Hammond (Richard Attenborough) requests that a paleontologist, Dr. Alan Grant (Sam Neill) and his assistant, Ellie Sattler (Laura Dern), come to the park and ensure its safety. Joining them are Hammond’s kids as well as a lawyer (Martin Ferrero) and a Chaos theorist, Dr. Ian Malcolm (Jeff Goldblum). Things are seemingly normal until the power in the park fails due to system geek Dennis Nedry (Wayne Knight). Nedry is selling embryos to a secret buyer. With the dinosaurs now on the loose, it’s a race against time to escape the island with everyone intact and alive!

As of this writing, it’s now been a quarter of a century since this film first hit theaters and, in many ways, changed the way movies were made. The DTS sound system was developed for this film and is now common in both theatrical and home video versions. The movie was one of the first to incorporate a more “realistic” CGI and set the standard for thousands of films to come. The film has inspired, again as of this writing, four additional sequels and it shows the staying power of the original. It’s not perfect, mind you, but it’s one of the few that actually had me put my feet up in my movie theater seat upon my first viewing. Not many movies can do that. If, for some reason, you’re one of the few that hasn’t seen this movie – see it. It’s just one of those that needs to be seen.

I’ve seen this film on VHS, Laserdisc, DVD and Blu-ray and it’s impressive each and every time.  This new 4K version is part of a box set that contains the first four films. This is one of the bigger releases for the fledgling format, but it’s a good sign when studios release their big guns.  That said, the newly-remastered 1.85:1 HEVC 4K image looks better than it ever has. Deep blacks and contrast look very nice, colors, detail and texture are all top notch.  Contrast and color depth are improved as is the detail. There are a few scenes that leave a little to the imagination, but by and large it is an upgrade over what’s previously been available.

Ok, the audio. Let’s talk audio, shall we?  The previously-released DTS HD Master Audio soundtrack has been replaced by a next generation DTS X mix that, well, rocks?  Jurassic Park simply resonates on every decibel and even being two decades old, it’s still one hell of an audio experience.  Surrounds are very active, the front stage is hammered with action from beginning to end and the LFE will certainly earn their keep during this 127 minute thrill ride.  Simply put, this is one of the better examples of sound that I’ve heard and that’s been the case for quite some time.

There has been no new supplemental material included on this 4K release, instead all of the supplements are on the Blu-ray also found in this set.

I’m willing to bet that if you had to name one of the five best or most memorable films from the 1990’s, this would be on most folks’ lists. Jurassic Park is a classic in every sense of the word and even a quarter of a century later, it still looks and sounds good.  The only way, currently, to get this film on 4K is to buy it as part of the set, but I’m willing to bet that anyone who liked this will not have a problem adding it and the sequels to their collection.