The advent of home theater has allowed for some of the most widely accepted films to be seen and heard in our homes with a quality that is second only to going to the theater. As time passes, Blu-ray has become more and more mainstream and with that, more and more titles we clamor  for. It also seems that the titles themselves are making their way as special editions, too. It’s hard to believe, but it’s been two full decades since Spielberg’s dinosaurs gave us a thrill all to the tune of box-office gold. Stephen Spielberg, master of the movies, both big and small showed us that he could make us laugh, cry and scare the living hell out of us as well. With Jurassic Park being one of the main event movies of the Summer of 1993. Of course, I was one of those people who thought the movie was for kids, so I went and saw Last Action Hero, and we all know who eventually won out between those two. What better way to commemorate one of the biggest movies of all time than by going back and making it 3D and releasing it over again?  Who said movies were about entertainment, c’mon – it’s all about the money!

Based on the book by Michael Crichton, we meet the dinosaurs before we meet the main charcters in the film. Of course, the characters play second fiddle to the real stars of this film…the dinosaurs. However, for what it’s worth, the cast is comprised of big time stars and even a screen legend by the name of “Sir” Richard Attenborough playing the title character of John Hammond, the creator of Jurassic Park. Hammond has figured out a way, partly by being the billionaire CEO of Ingen (a biological development company), to clone many species of dinosaurs. How, you ask? Well, there’s an informative little cartoon that tells us…Based on the premise that mosquitos, who fed off the blood of dinosaurs some 65 million years ago, that got trapped in the sap of trees and likewise had been preserved in amber. By digging up the amber, extracging the dinosaur blood (thereby containing the DNA) and replacing the missing links with that of frogs, it’s now possible to create living dinosaurs in the 20th century! This being a very touchy subject, the park has already been frought with lawsuits and requries the approval of several scientists or it faces losing the financial support of it’s contributors. That’s where the cast comes into play. We see that Hammond has already selected a “chaoticitian”, Ian Malcolm (Jeff Goldblum) and now Hammond is looking for the leading Paleontologist, Dr. Alan Grant (Sam Neill) and at his side is the leading Paleobotonist, Dr. Ellie Sattler (Laura Dern). Their mission, along with Malcolm, is to tour the park for a weekend. The thought is that they’ll be satisfied with it to give it their “seal of approval”, thus the financial backers to Jurassic Park will have nothing to worry about. Of course, that doesn’t happen.

Being of scientific minds, and after their initial shock of seeing living dinosaurs wears off, they have moral conflicts with how the park is run. They find out that the dinosaurs are deprived of becoming male (hence no “unauthorized reproduction”) and are concerned that they will not coincide with the 20th century. This is all a precursor to what Jurassic Park is really all about – the dinosaurs run amok! Through some extravagant set of circumstances, Dennis Nedry (Wayne Knight) has agreed to sell the embryo’s of certain species to a competitor. Nedry feels that he has not been financially compensated for his role as head programmer enough, so he riggs the system to fail, therby buying him enough time to steal the embryo’s (without being caught) and collect his money. This doesn’t happen, though, as the park is down, the electric fences go down and before we know it, the dinosaurs are loose and anything that moves is the next meal! The rest of the movie is basically a cat and mouse game, with the concern being shifted on the park opening, to the people getting off the island in one piece. This is more of a showcase to see what Spielberg can throw at us, but it’s fun, frightening and exciting all at the same time. Jurassic Park has some dark sides to it (people do die, that’s for sure), but there’s enough light-hearted jokes in it that it’s suitable for most anyone. Not only is it historically accurate, the acting and energy throughout the movie will make it one that you’ll want to watch over and over. I personally like it more and more every time I watch it.

I’ve seen this film on VHS, Laserdisc, DVD and even Blu-ray and it’s impressive each and every time.  Obviously with the Blu-ray we’re getting the latest and greatest and Jurassic Park simply looks divine.  Since there wasn’t a review of the previous Blu-ray set, I do own it so I’ll say that the image looks consistent with the previous version.  What’s that you say?  Universal didn’t go back and do a new transfer for a set they could just throw out to coincide with the 3D release of the film?  Nope.  The 1.85:1 AVC HD image is striking for sure. Deep blacks and contrast look very nice, colors, detail and texture are all top notch.  And this movie is perhaps one of the best examples of CGI that I can think of (and bear in mind that this was circa 1993).  Jurassic Park looks as good as ever, though if you already own the set, it might not be worth the upgrade for the image alone.

Ok, the audio. Let’s talk audio, shall we?  You know how pretty much every Blu-ray contains a “DTS HD Master Audio” soundtrack?  Yeah, well the whole DTS sound thing started with this movie right here.  Yep, it did.  It took some time to catch on, and I was one of the early adopters of the dts format (though the pickings were slim for a while) but DTS has finally seen its day.  Jurassic Park simply resonates on every decibel and even being two decades old, it’s still one hell of an audio experience.  Surrounds are very active, the front stage is hammered with action from beginning to end and the LFE will certainly earn their keep during this 127 minute thrill ride.  Simply put, this is one of the better examples of sound that I’ve heard and that’s been the case for quite some time.

Over the years, Jurassic Park has been released and re-released and this latest version is certainly no exception.  I have no idea where my DVD is, but I do remember some of these featurettes.  Most of the same material is present, they’re just re-packaging the movie in a single disc version in an attempt to sell it to you again.  I’m sure it’ll work, too.  What’s new is that this has both a Digital Copy and an Ultraviolet copy, so you can pretty much watch this disc on any device that you have.  As for the supplements, we get the “Return to Jurassic Park” documentary as well as well as a few “Making of…” featurettes.  “Steven Spielberg Directs Jurassic Park” is also included as is the “Foley Artists” segment that I enjoyed the first time around.  We get some CGI features, some before and after segments as well as some animatics and some pre-production conceptualizations. 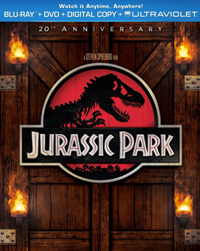