A few years ago Disney did something they hadn’t done in a while…something new.  They took a work of classic animation and decided to update it and make it a live action film. Alice in Wonderland starred Johnny Depp as the Mad Hatter and once again saw the star in all sorts of weird makeup. But if anyone could pull it off, it was him. A few years later we were graced with Maleficent starring Angelina Jolie. The resulting box office for these was enough to start something and, of course, they’re running with it. Now this isn’t a bad thing. It’ll bring these classic Disney tales to a new generation of kids (and adults). A quick search reveals that many of these are being made regardless if we want them or not. The Little Mermaid? Yep. Beauty and the Beast? Uh huh. Fantasia? You bet. The list goes on. Granted, not all of these films are box office gold. The recent Pete’s Dragon didn’t do that well as did the sequel to Alice in Wonderland. But it’s Disney, so money isn’t really ever an issue. However one of the titles that did do well, both critically and financially, was The Jungle Book. Yes, the live action remake of the 1967 classic. Was it all it’s cracked up to be?

A young child has been abandoned in the dangerous jungle, but he is soon taken in, though by an unexpected someone. A panther named Bagheera (voiced by Ben Kingsley) scoops up the boy and names him Mowgli. He is raised by the animals in the jungle, so Mowgli (Neel Sethi) only knows that world and his wolf pack is his family. When he reaches the age of ten, Mowgli becomes a target for one of the jungle’s most vicious predators, Shere Khan (voiced by Idris Elba). Khan vows to take revenge on all humans, so it is decided that Mowgli should be returned to the village of humans. The trek to the village proves to be long and dangerous, with threats and distractions of all kinds. Some are violent like the fierce snake Kaa (voiced by Scarlett Johansson), while others are more friendly, like Mowgli’s friend Baloo (voiced by Bill Murray). On the verge of leaving the only world he has ever known, can Mowgli transition back into life in the world of humans?

Fans of the original film or even the book will feel right at home here. Disney has really created something from a previously story thought tired and “been there, done that.” Well, rarely does Hollywood deliver on something like this, but I have to say that I was impressed. The cast of voice actors is great, though I once again fail to see the reasoning behind casting such high-profile stars. I have to believe that there are just as many talented people out there that will work for a fraction of what Scarlett Johansson or Bill Murray would charge, but then again I don’t run the finances for Disney. Everything that’s in the original is present here and this is one you should probably see (or might have seen) in theaters. I’m not often this enthusiastic about a film, but this one really did it for me. If your kids haven’t seen this yet, and let’s face it – we all know they have, it’s a no-brainer to see (again).

Though CGI movies have been around for a while, it’s really only in recent years (to me) that they’ve really started to look good. I was watching Life of Pi the other day and was amazed at how lifelike the animals looked. Flash forward to my viewing of this and it’s pretty amazing what they’ve been able to accomplish. I’m willing to bet that when the 1960’s version of this came out in animated form, a live-action version was one that the filmmakers would have not thought possible. Still, here we are and I have to say that I was pretty amazed at the 1.85:1 AVC HD image. The dense, dark jungle is the setting for the majority of the film and within the forest, we get a real sense of depth and even darkness. The animals look realistic without having that “plasticky” look and feel to them. I saw no evidence of black crush, artifacting or really anything that could be considered close to an error. This is the epitome of what a feature-length film should look like on a home format. Top notch all around.

The included DTS HD Master Audio soundtrack is the icing on the cake. It’s rich and robust, every channel is engaged and used with great effect. The channels seem to work well off one another providing a very dynamic and active mix that kept my head turning on more than one occasion. Vocals are sharp and pure and I’ll come right out and say that I chuckled when I heard Bill Murray’s voice. He just has that impact on me.  Still, the LFE get their chance to shine, the surrounds add ambiance and it all combines for a nice-sounding track that’s sure to please.

If you’re a fan of Disney’s live action adaptations (Cinderella, Alice in Wonderland, etc.) then you’ll be right at home here. Taking an already great tale and embellishing on it, The Jungle Book is really fun for the whole family. It’s got a bit of everything. The Blu-ray looks and sounds amazing and has a smattering of extras that warrant a purchase. 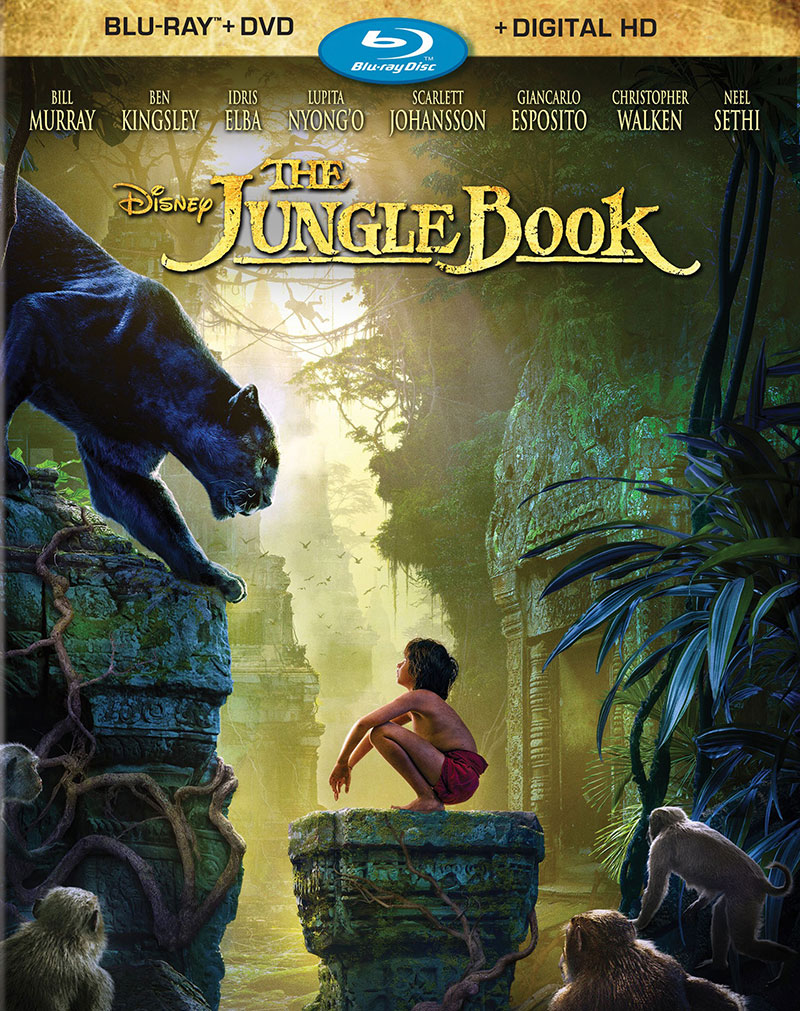