Life must be either really good or really bad (depending on your point of view) if you’re Taylor Kitsch. On one hand, he’s the star of two “event” movies of 2012 with John Carter and Battleship. On the other, both weren’t exactly financial powerhouses at the box office. John Carter has been called the biggest financial disappointment of any movie – ever. Then again the source was my step son, but I’ll wager that even if that statement wasn’t 100% accurate; it’s got to have some merit. And Battleship well, sunk (sorry couldn’t resist) at the box office. So yes, he’s got chiseled good looks and no doubt plenty of female admirers, but none of that matters if the movies don’t make money. John Carter was touted as the first big movie of the year but when all was said and done that title went to The Hunger Games instead. What made this film so entirely bad? I’ll tell you why…

I’m not the most intelligent person out there, but I’d like to think that I could make sense of a plot if it, well, made sense. This one doesn’t. We meet John Carter (Taylor Kitsch), a veteran of the Civil War whose been asked to return and fight. He refuses, seeks solace in a cave, touches a medallion and is transported to what we can only imagine is Mars. John finds he can literally leap tall buildings in a single bound, though after the effect has worn off, he seems to walk with relative ease. He then meets a race of aliens who he can’t understand and then he can. He even mentions it “I can understand them now.” Nothing is really ever mentioned about it again. Of course what’s a film without a female lead and in this case we meet Dejah (Lynn Collins) who we know John will end up with because, well, she’s the only other female human. John has to fight the forces of evil and blah, blah, blah – the end.

John Carter was a flop for a very simple reason: it simply wasn’t a good movie. The plot seemed to leap around as much as Carter’s character did and there wasn’t really anything strong to hold it together. While the physical look and feel of the film is amazing, it matters not when you can’t make head or tail of what’s going on. Disney might need to stick to more family-oriented action films like their highly-successful Pirates of the Caribbean… series. I really don’t know if this was based off a comic book or graphic novel and I wasn’t interested enough after the end credits rolled to do any research. There are films that are fun to watch, others aren’t and I’m all about the guilty pleasure movies so long as they don’t take themselves too seriously (this one does). My advice is to skip it, even as a rental.

Say what you will about the film, and I did, but John Carter does seem to embody everything that’s right with HDTV Blu-ray. The 2.40:1 AVC HD image looks spectacular and does showcase every bit of detail and texture imaginable. Most of the film takes place on “Mars” with its rich, earthy tones. Flesh tones seem a bit on the overcooked side, then again I think the actors probably got quite a tan when shooting the movie. Detail is stunning with little flecks and specs visible, especially during some of the battle scenes. The CGI look amazing a well with seamless moves that we know are fake, though they do seem rather lifelike on screen. It’s a shame a film that looks this good can’t be an actual better movie.

As we might expect, the film also sounds amazing with a lossless DTS HD Master Audio soundtrack rocking and rolling (literally) from beginning to end. Vocals seem very clear and rich, even the pseudo-alien speak sounds very robust. For some reason Taylor Kitsch finds it necessary to speak all of his lines in a gravely, raspy tone maybe to make himself seem a bit more “manly?” At any rate, mix is simply bursting with action from every one of your 7.1 channels. Things creak, roar and make about every other sound in the spectrum. It’s loud too. Very loud. For all that John Carter lacks in plot, it more than makes up for with this soundtrack.

There are a few different versions of this film out there, unfortunately none offer a more coherent plot! Ok, all joking aside we start off with an audio commentary from director Andrew Stanton and a few of the producers. Stanton’s comments are very articulate and he does delve into all aspects of the film. I had the opportunity to interview Stanton back in 2000 when the Monsters, Inc. DVD was released. He’s a nice guy. My opinion of him hasn’t waned due to this film. There are some deleted scenes with optional commentary, ten in all as well as “100 Years in the Making” as it examines the John Carter series. Lastly we have “360 Degrees of John Carter” which is a production diary as they visit the costume and art departments for the daily shoots. Disney’s second screen experience is also included as is a DVD of the film. 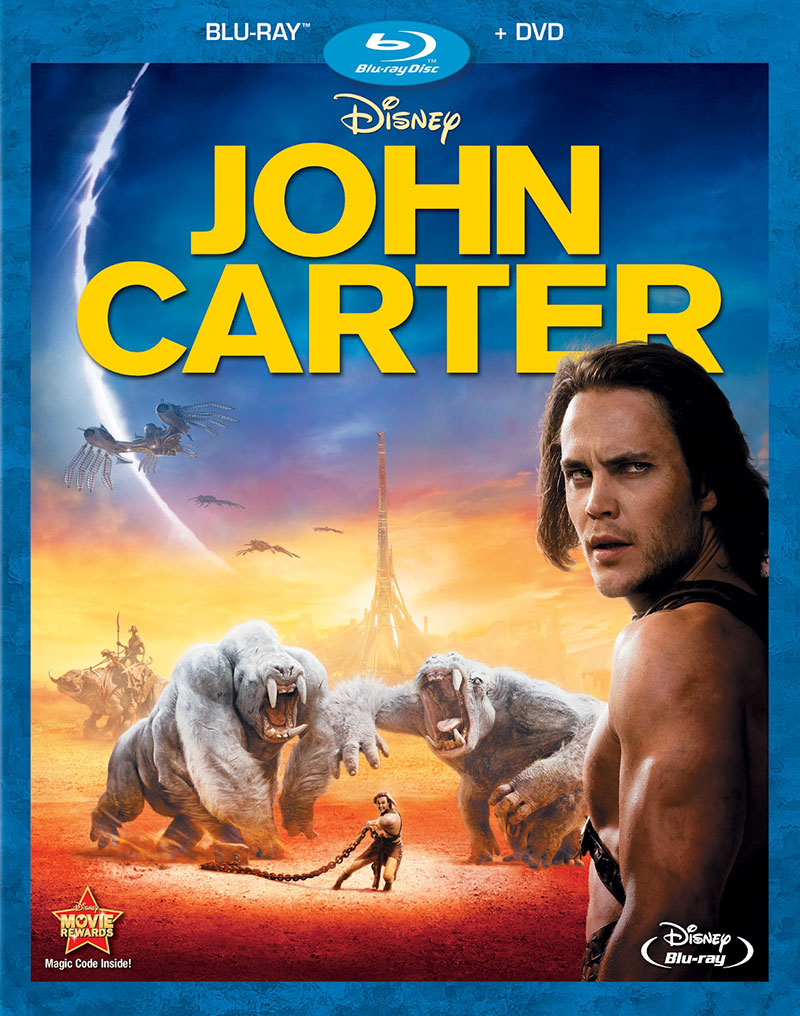