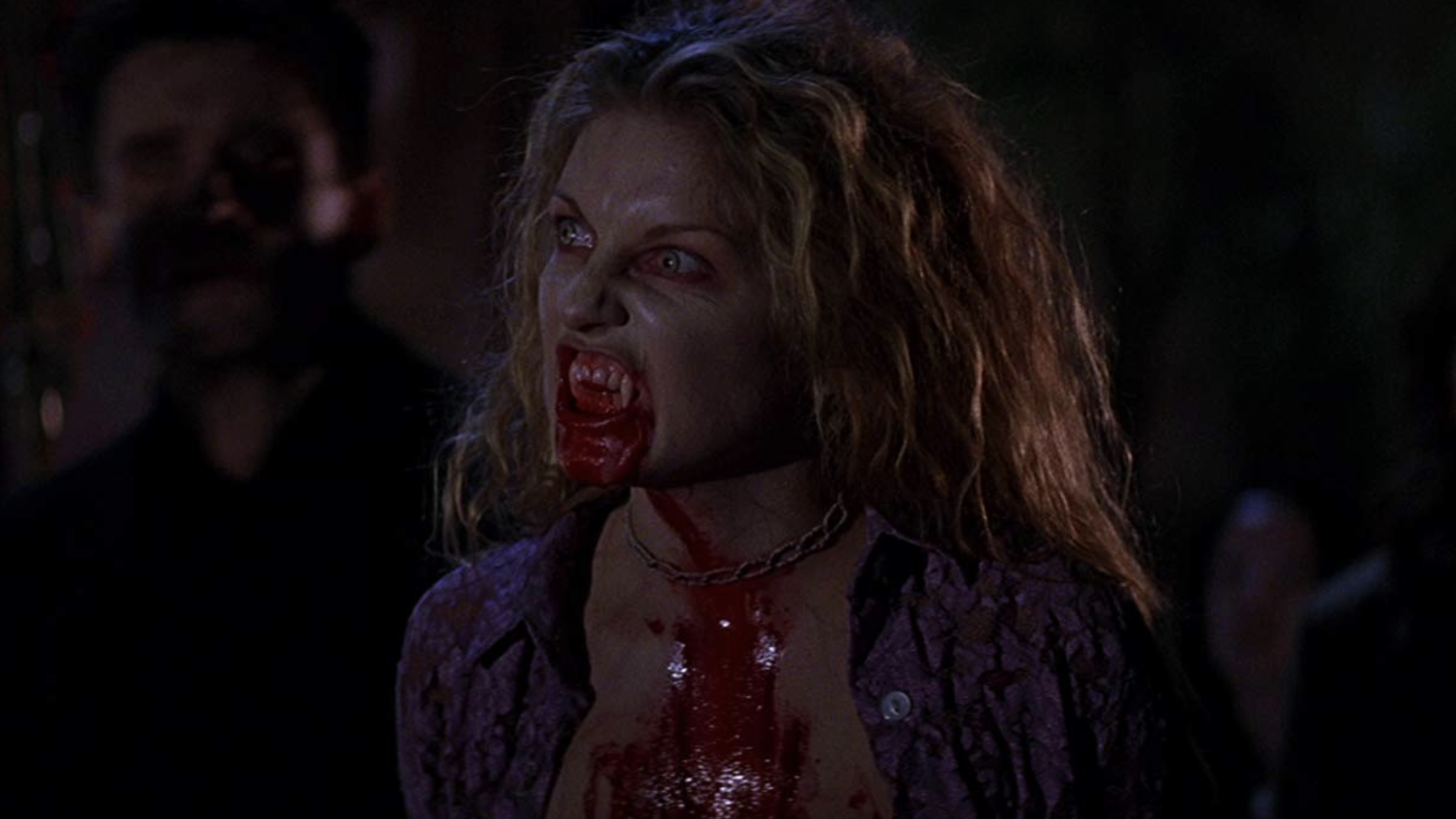 John Carpenter has had an amazing career that is defined by films that have their own very vocal audience that loves them. His most acclaimed films are Halloween and The Thing, but there are audiences that are just as passionate about Big Trouble in Little China or They Live. Recently I watched four John Carpenter films in less than a week. Needless to say, it was a great week. One of the things that stuck out the most is how different his output can be while always being distinctly off-beat and his own. Vampires draws some stiff criticism from some Carpenter fans, but I found myself really enjoying the movie for what it was: a western film with vampires.

The film begins with Jack Crow (James Woods) leading his team of vampire slayers into a nest of vampires in the middle of New Mexico. They have a system where they shoot the vampire with a crossbow. The bolt from the crossbow is attached to a tow kit on a Jeep. The hitch can then drag the vampire into the daylight where the vampire will explode into flames. After clearing out the nest, Jack and his team, including a priest and his pal Anthony Montoya (Daniel Baldwin,) retire to the Sun God Motel where they can indulge in booze and hookers. At this point Jack meets the beautiful call girl named Katrina (Sheryl Lee.) Unfortunately, the party is broken up at the motel by an incredibly powerful vampire named Valek (Thomas Ian Griffin.) Everybody is killed except for Anthony, Jack, and Katrina. Katrina suffers a bite during the ambush. Anthony decides to help Katrina and simultaneously rely on her psychic link to Valek to help track him down. As an unorthodox team, with the addition of Father Adam Guiteau (Tim Guinee), they begin to track down Valek in hopes of destroying him before the disease inside Katrina turns her into a vampire. They must destroy Valek before he can retrieve a black cross and perform a ceremony which will allow him to live in the sunlight.

Looking at the reviews for this film, I had no idea what to expect. It is unlike any John Carpenter film that I have seen, but not in a bad way. One item that stands this film out from other Carpenter films is that it features much more nudity and violence than a standard Carpenter film. This did not bother me, but was an anomaly for Carpenter. James Woods is essentially a stand-in for the Kurt Russell character you would expect out of a Carpenter film. He delivers some great lines as Jack Crow with a good amount of swagger. I’m a James Woods fan and it was fun to see him sink his teeth into a role this meaty. Next up, you have Sheryl Lee a.k.a. Laura Palmer! As a Twin Peaks fan, I was beyond happy to see her in a Carpenter film. Daniel Baldwin is also a lot of fun to watch in this film.

What people didn’t expect is that this film is not really a horror film at all – at least in any traditional sense. It is essentially a Western film that has vampires in it. From the ghost town action scenes, widescreen shots of canyons, and throwbacks to director’s like Hawks and Ford – the slayers might as well be an ambushed posse. If you consider it in the realm of action packed westerns, the film plays really well.

Add into the mix great cinematography by Gary B. Kibbe and a great score by John Carpenter himself and you have the makings of a cult classic that has not been given the love it deserves. Is it as good as The Thing? No. Is it better than Prince of Darkness? Absolutely. If you are looking for a fun action film, this is well worth your time. Carpenter viewed the film as “The Wild Bunch meets Vlad the Impaler.” How can you not enjoy that?

Shout!Factory have provided a fantastic looking transfer that is based on the same transfer as Twilight Time’s release. Carpenter has always done a good job of making sure his films look beautiful on Blu-ray and this film really shines on the format. The cinematography by Garry B. Kibbe looks remarkable, with visual nods to Sergio Leone, Ford, and the other directors that influenced the film. The visual style achieves that pretty well. This 1080p AVC encoded transfer has great attention to detail and should please any fan.

The same boisterous DTS-HD MA 5.1 track that featured on the Twilight Time edition is also present here. This track has excellent clarity of dialogue and the score by John Carpenter is one of his most rock-based scores. For the fans who would prefer to hear the track as a DTS-HD MA 2.0 track, Twilight Time has provided one along with an isolated score track. I personally enjoyed the 5.1 track enough that I wouldn’t consider the 2.0 track, but it is nice to have it all.

I will probably take some heat for recommending this so highly, but I’m my own man and I stand by my decision. I enjoyed this movie a lot. It’s a fun hybrid between the vampire and western genres. James Woods plays the lead. Laura Palmer is a vampire hooker. I like all of these things and I love John Carpenter’s style. Shout!Factory has done an excellent job of providing a more robust package for fans than the prior excellent Blu-ray offered by Twilight Time. The visuals and audio remain essentially unchanged, but the new features that have been added are going to be of interest to fans of the film. Kudos to Shout!Factory for making this film available again to a wide audience!