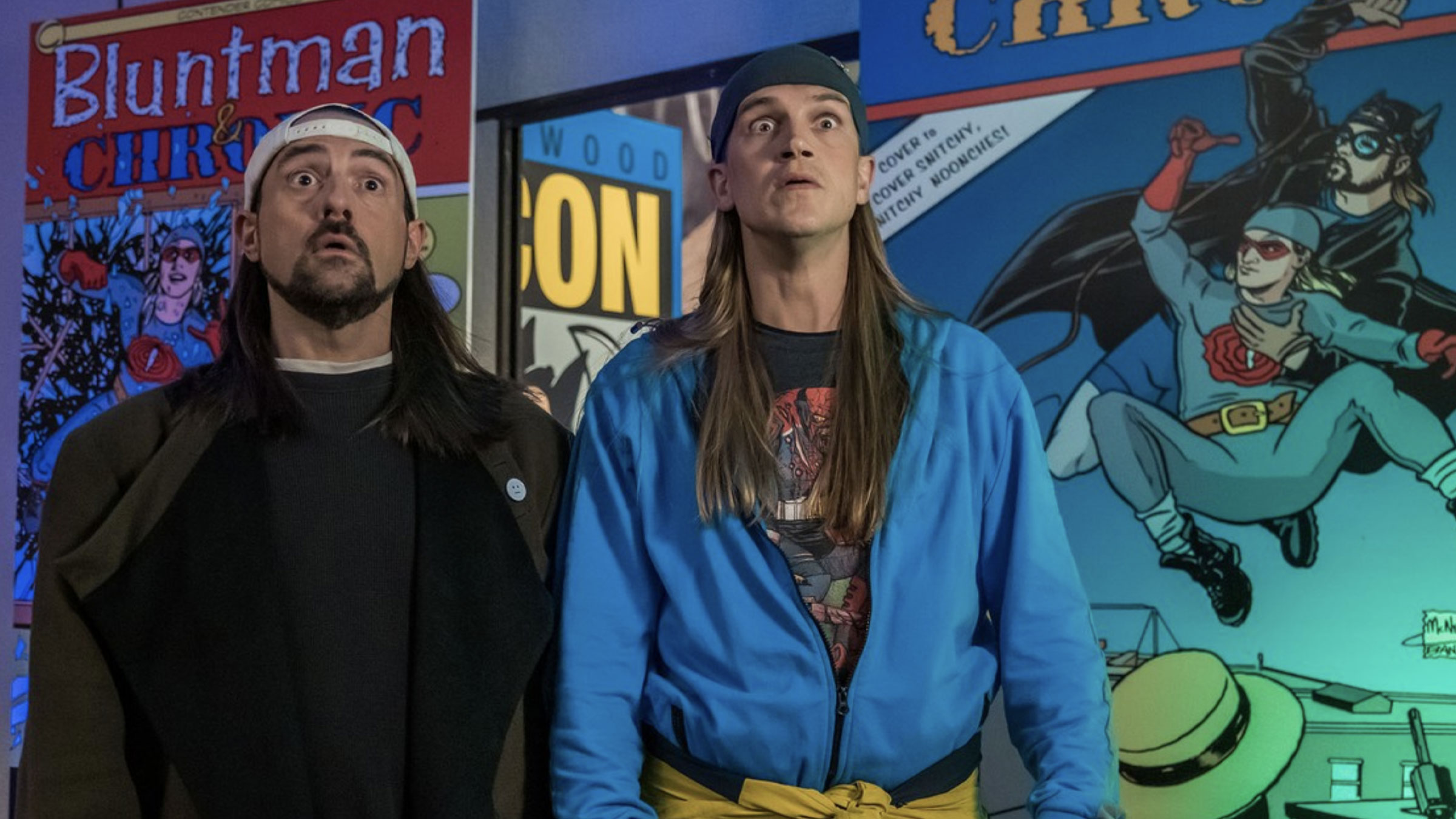 Time marches on. I can vividly remember watching MTV News (MTV was a network that showed music videos and the teens, before the internet, got their pop culture news from the show) and hearing about a movie called Clerks. It was just that. A movie about the life of a guy and his friend who worked at a New Jersey convenient store. It was a hit both critically and commercially. Directed by Kevin Smith, a film student who had maxed out his credit cards to get the movie made, it turned him into a star and there were more movies to come. Smith’s next film, Mallrats, was bashed by critics (though I loved it) and he finally “grew up” with 1997’s Chasing Amy which effectively launched Ben Affleck’s career into superstardom. It’s been a rollercoaster of a ride for stars Jason Mewes and Kevin Smith. Mewes is reportedly finally clean and sober and Smith survived his heart attack. So why not make a movie? Or, better yet, reboot one?

Jay (Jason Mewes) and Silent Bob (Kevin Smith) have lost their identities. Literally. After a sneaky lawyer (Justin Long) has managed to claim their intellectual rights, the duo must travel cross country to reclaim their copyrighted names. And, along the way, we meet a veritable “who’s who” of cameos, most of whom have appeared in at least one Kevin Smith movie. And, in a word, that’s it. Think of it as Dumb and Dumber and the characters they meet along the way. Smith has cast his own daughter (Harley Quinn Smith) as Milly who, unbeknownst to her, turns out to be Jay’s long lost daughter. That’s not a spoiler, by the way. And with cameos galore, they meet up with Matt Damon reprising his role of Loki from Dogma, Ben Affleck as Holden from Mallrats, Jason Lee as Brody from Mallrats and even Jason Biggs as he makes fun of Jersey Girl saying “it’s the movie that killed my career.”

Smith’s ability to poke fun at himself is certainly refreshing and he even pokes fun at a few of his own films like Cop Out (which I actually liked). And it’s that type of humor that’s kept his career alive for so long. That and he’s a fervent podcaster with legions of fans. In the end, Jay and Silent Bob Reboot is a good movie that pays homage to all of Kevin Smith’s previous films. And, yes, we’ve been treated to them for over a quarter of a century now. Imagine that? Who knows what the future holds for Smith and Mewes (aka Bluntman and Chronic or Jay and Silent Bob). They’ll no doubt go down as two of most likeable stoners like Harold and Kumar or Cheech and Chong (one of whom appears in this film). Love ’em or hate ’em, we just can’t get rid of ’em. And that’s OK.

Smith was one of the pioneers of the 90’s indie film movement. Just looking at 1994’s Clerks, it’s the antithesis of what we look for in a modern day Blu-ray or 4K title. But it’s been a while since Clerks and fame and fortune have made Smith into a bona fide filmmaker. By that I mean that looking at the production values of Jay and Silent Bob Reboot look like (GASP) a real movie! Shown in a 2.39:1 AVC HD encode, colors pop, detail is razor sharp and I found nary a thing to complain about. The endless cameos have shown how much the actors have aged, but that’s OK – we all do. Lionsgate’s transfer pulls no punches and if there’s something to complain about with this film, it shouldn’t be how it looks.

The films of Kevin Smith haven’t always been demonstration material for your surround system. And this one is no different. Most of the jokes are dialogue-driven or simply seeing which star will enter in the next scene. That said, pun fully intended by the way, vocals are sharp and clear. Surrounds are used sparingly and the main meat of the film takes place in the front stage. The DTS HD Master Audio mix does a fine job here, so nothing to complain about.

I didn’t dislike the film, but I kept wanting to laugh more than I actually did. In the 90’s, Smith’s films were a staple of my 20’s, but I (like they) have grown up since then. If anything, it made me want to go and watch Jay and Silent Bob Strike Back. The movie looks and sounds fine, though the lack of supplements of note is a bit disappointing.